Though often simply brushed aside as a simple form of txt tlk for "before", there is a far more sinister reason this simple combination of letters and numbers is so prevalent.

The Humble Origins of B4[edit]

In the beginning there was a council of evil robots who determined the fate of the universe, ruling with a mightly, clenched aluminum-titanium alloy fist over all the squishy meat-based life forms in their dominion. Then, His Noodliness came down and using his noodely appendages opened a serious can of whoop-ass, destroying said council, scattering their remains to the farthest regions of the galaxy. Only a single robot was spared from the might of his Noodliness- a simple Janitor Bot on lunch break designated as "B4".

Being a part of the wold of the evil Robots, B4 was also evil, though in a severely unappreciated way as nobody tends to fear an evil Janitor. Now, with nothing to do and nobody to praise his fine scrubbing abilities, B4 was distraught, alone in the world, and angry. B4 sulked in his corner of the Negaverse for millenia, cleaning the same half-destroyed rooms over and over again out of boredom, until the internet spawned the invention of the Chat Room.

B4 rises to Power[edit]

Simple teenagers in chat rooms across the globe lazily began sticking together letters and numbers as an abbreviation for words, not realizing their power. As the codes slipped across the digital stream spreading from our world to the negaverse via interspacial radiation particles flowing faster than the speed of light, our meaningless chats began to collect in the half-broken ancient Killer Robot Supercomputers (patent pending). B4 found our chat logs when he accidentally turned the supercomputers on and he recognized the meaning behind our idle chatter and inane Txt Tlk: unbeknownst to the bored chatters, they were speaking the names of B4's killer robot masters! Names of villainy and evil that once swept the galaxy such as ltr, lol, afk and G2G were coming into usage again. Perhaps the human race had remembered B4's masters on a primal level? 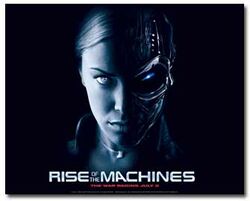 Armed with the knowledge that his robot masters were not fully forgotten, B4 searched through the remains of the Killer Robot Supercomputers (patent pending) for some shards of Data as to how to revive his masters. The answer, in the end, was far simpler than one would think. If enough humans continued to use the names of his masters, then the ancient Killer Robots would receive a faint pulse emitted to their neural circuits from the same electric stream that alerted him to the humans usage of their name to begin with. This at first would do nothing, but as the pulses built up, eventually it would rewire their neural circuitry allowing the Ancient Killer Robot Council to be awakened from their thousands of years of sleep to rule once more!

This triggered an array of plans carefully building upon one another, refining themselves in their purpose as time passed. Each plan, even if apparently failed, was a step in a greater plan we humans have yet to fully uncover as of yet and each plan gained B4 a little more power.

This is an incomplete list built up from massive research, the scientific analysis of thousands of human scientists (unaided by computers), and the half-unintelligible rantings of crackpots with tin-foil hats on their heads.

B4 began to send out Subliminal Messages to teenagers in their sleep during the mid to late 1980's. Though humans have yet to fully decode the human brainwave pattern, apparently kilelr robots have been doing it for years as a fun party gag. Though we are uncertain of exactly what was sent, we are rather sure it would translate to something to the effect of "USE THE INTERNET! DON'T USE FULL WORDS- USE TXT TLK!".

Thankfully, only the simple-minded and lazy of internet users would bother dumbing down their speech to simple acronyms and random gibberish at the time as such stupidity would simply brand oneself a N00b. Also, we have found that teens and adults are far less susceptible to subliminal messaging than children and, as few children used the internet at the time, this further weakened B4's origional plan of subtle brainwashing.

After a decade or so of sending subliminal messages alone, B4 launched the next step in his master plans- the humans needed to not only be told to use Txt Tlk, they needed to be dumbed-down into using it. Soon B4 began to sending subliminal messages to corporations to create new X-TREME!! candies, drinks and foods with hyped-up marketing, all laced with mind-numbing chemicals intended to dull the minds of the consumers, especially if said minds were still forming leading eventually to a generation of stupid teens and adults on the internet.

I wouldn't drink this if I were you.

A few of B4's products include

...and there are many more, though our informant was killed before compiling a full list.

With a new, stupider generation of computer users beginning to rise, B4 was prepared to exploit the weakness of every teenager in existence: peer pressure and "looking cool". With the help of other lesser evil robots located on the Earth such as Arnold Schwarzenegger, Robocop and Chris Hansen, B4 launched a propoganda campaign of films featuring "cool" robots and hackers using Txt Tlk to speak in secret Elite messages to one another across the internet. From data mined in the finest social research centers of the internet such famous films such as The Terminator, The Matrix (and it's sequels), the Star Wars prequels, Hackers and many, many more.

To further spread the usage of txt tlk B4 worked out an arrangement with the top Cell phone carriers of the world, using George Bush 2.0 as a puppet, to introduce text conversations to cell phones. With users being charged per line of text sent, people were bound to start using Txt Tlk and, with the dumbing down in place, soon, they would use it to talk to people even in the same room as they were! All that was needed was to promote the usage of Cell phones. Before such plans could be activated, sinister forces from Japan unleashed new "cute" cute phones, and txt tlk caught on like wildfire.

Currently B4 is creating a secret base on Earth somewhere in the united states of America, using his human mind-slaves and lesser robot minions to do his bidding. Rising from lowly janitor, B4 is gorging vampire-like on his power, our very data streams enriching his neural processor from humble toiler-cleaning robot to vicious political and social mastermind. His rise to power has inspired a wide number of other more modern killer robots and Evil Overlord wannabes, most of which end up enslaved under the mighty B4 or a mere pawn in his ingenious plans.

Pasatafarians have begun to notice the disruption in the noodlesphere of Earth and have ratcheted up their prayers in full Pirate regalia with the hopes of focusing their energies into a force of piratude so powerful that it will focus into a bat-symbol like beam of cosmic energy and His Noodliness will be summoned back from destroying the Polar Ice Caps to once again save the people of our universe from the resurrection of the Council of Killer Robots, soon to be led by the mighty B4.

Will it work? Well, if not, we're screwed. Whoever thought the fate of the universe would rest upon the backs of Piratess? Ninjas around the world (that have not been replaced by B4-controlled cyborgs) are fuming and demanding their attention. You can almost hear B4's mechanical laughter at the ninja protests.

The majority of people (and all those who are sane) can assure the mentally ill that B4 robots are not taking oer the world, and advise their carer or nurse to keep watch on their internet use, as not to frighten the young.