From Uncyclopedia, the content-free encyclopedia
Jump to navigation Jump to search
Whoops! Maybe you were looking for Hitler?

George Bush 2.0 was the last effort of the Republican Party to continue the Bush family line after George Bush Sr., George W. Bush, Jeb Bush, and Marvin Bush all suffered from fatal mountaineering accidents. They took the mangled body of George W., pulled out his organs and what passed for a brain, and replaced them with sophisticated machinery designed by Windows.

They programmed George 2.0 with Republican ideals and plopped him out as the Republican candidate. What they hadn't expected, though, was the decay set on by George Bush's skin. It rotted extensively, turning green, but "George" explained that it was a rare skin disease. Despite the rotting, George was put on the ballots, and gave a speech at the Republican convention. During this speech, sheets of rotting flesh began to peel off "George's" face. The rain poured in, jamming systems and rusting machinery. "George" stalled.

"George", jammed in position at the Republican convention.

The Republicans were taken off the ballots and the Democrat candidate won.

The Republicans, not daunted, took the brain of George W. Bush and inserted it into the body of a MagnaGuard left over from the radical changes of the intelligence community. George was stunned. He went crazy, hurling himself off the operating table and thrashing. Psychologists informed the Republicans that, obviously, people got pretty pissed if you're manipulating them. 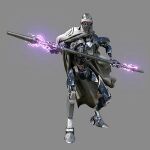 George took his provided electrostaff and killed all of the surgeons, senators, and psychologists in attendance, and went out to hunt down the Republicans. George made his infamous entrance into Congress the next day, slaughtering all in attendance, and rampaged through the White House, murdering his successor and mastermind of the plot, Dick Cheney. He trashed the NSA and began to massacre tourists on the Mall, but a surviving Senator, Russ Feingold, called the Army. MagnaGeorge was blown to bits, and all particles of Bush DNA were vaporized (this involved cutting off the right hands of most foreign leaders). Never again would such a terrible plague be loosed on the people of Washington.

Also his wife Hillary Duff wasn't shot because they afraid of her snass might wake up and force them to fuke her.

Though George 3.0 was gone, the scars he left remained. The "Cleanup-After-Bush" project was launched, and thousands of helpers from around the world volunteered. Washington DC was being rebuilt, but the people still had to live with his actions. A memorial building called Buck Fush was built on the north end of Washington DC, to honor those who died.