“JK? Yeah, Hitler was talking about that, I think it had something to do with pastries”

JK is a mysterious concept dating back to a time so long ago no one remembers exactly when it came into being. JK stands for Jesus Killer, and is a racial slur against Jewish people. Since its origin, like many other terms that were racial slurs or otherwise offensive to one group (gay, retard), it has been adopted into normal usage as an insult to anyone, regardless of their religious or ethnic background. 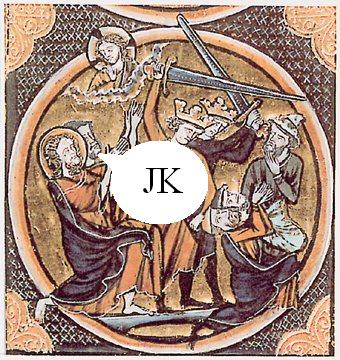 JK dates back before the Crusades, when Christian mauraders would shout JK as their battle cry against the Jews.

The first recorded use of JK was during the Crusades, when Christians, angry at the Muslims for little or no reason, looked for someone to pick on. They found a little known figure in the Bible known as Jesus, and saw that the Romans had killed him. Their long fueled anger at the Islamic Nations were then subverted into the Jewish peoples, causing an outcry against the Jews, and as an added bonus Jesus became far more important than he was before, and eventually displaced Satan as the son of god, which very much angered God and Satan, who refused to deal with humanity ever since. Anyway, the outcry against the Jews was sponsored by a famous pope, purported to say said "We need to kill all jews! JK! JK!". People assumed that JK meant Jesus Killers, and went on a rampage. (Although unsupported theories wildly propagated by the communist newspapers guess that possible, maybe, he might have meant to say Just Kidding). Either way, the Jews were screwed for a while back then.

The Decline in Use[edit]

JK had a nice run as a slur during the Crusades, but afterwards everyone felt kind of bad about what they did to the Jews, and stopped 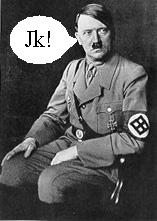 Hitler is the most well known modern figure to have used the acronym JK with its original meaning.

using it. Occasionally, a famous figure would say JK, like the pope, but no one listened to him after the Crusades, so eventually no one even remembered the acronym JK at all. If there was a chart in JK use, it would slowly taper off until it reached 1, because theres always one racist who knows every slur out there. Otherwise, JK went unused for a while.

This continued for many many many many many years, until one day a nice young painter named Hitler discovered a book of immense knowledge about the crusades. With a tear in his eye, he saw his pupose in life, to grow a really funny moustache and yell at people, and saw JK as his way of making that dream come true. He began a propoganda campaign against Jews in his native country, Germany, and quickly rose to power, as everyone thought that JK was just about the coolest combination of letters they had ever seen. He was defeated shortly after his rise by Oscar Wilde, but while defeating him, Oscar immortalized JK, making a quote out of it. (see above)

As with thousands of other sland terms that start off insulting to everyone, this term was originally the foulest things one could say to a member of the Jewish persuasion, yet its use in Iming and Aoling has made it a mere shadow of its former self.

An example of common usage today:

Some Jews have denounced JK as a sign of the devil, much like 616, or oysters, and if they ever hear it, they curse that person with a hoodoo jynx. Other Jewish people have accepted this term, but only for personal use, and they greet it other with it. Pronounced "Jikka", it is not uncommon to see two Jewish friends meet and say "Wassup, Jikka".

Warning: If you say Jikka to any Jew and are not Jewish, prepare yourself for an asskicking