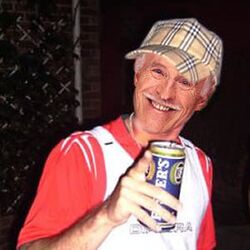 The literal meaning of GG is "This has been a good game, thank you for playing with me and have a nice day". Its etymology stretches back to ancient Japan where it was spoken by ninjas as they commmited seppuku.

No matter how bad something goes or how awful something is, u must always say GG. Even if L33T H4X. The person to whom this is said should respond appropriately by also saying GG. If a murderer enters your home, proceeds to murder your family and then rape you, you must still say GG at the end. The most inappropriate and insulting thing you can do is not to say GG. Do not be surprised if you're disowned by your family and wake up abandoned in the desert if you refuse or forget to say GG. Catholics believe that if you refuse to say GG to Saint Peter when you arrive at the gates of heaven, then you will be banished to hell for all eternity and it's GG for you! 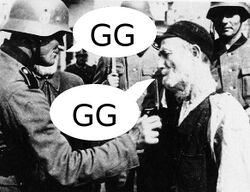 The historical significance of GG resonates through history. Upon his assassination at the hands of communists in parliement, Julius Caesar spoke his last words "GG......... noobs." The Three Musketeers adopted it as their slogan and they always shouted "GG!" as they put all their swords together in the air. During the tyrannical reign of Vice-President Al Gore, saying GG was banned in the United States in an attempt to reduce Global Warming. This triggered a chain of events that led to the Civil War and the Thirteenth Amendment which enslaved all Americans darker than a piece of hickory wood. George W. Bush was lambasted for saying "GG, mission accomplished!" on an aircraft carrier during the opening days of the Iraq War because many believed that saying GG was an insult against Allah and Muhammed even though it is written in the Koran that u must say GG at least 5 times a day while facing Mecca.

GG also has it's roots dating back to prehistoric times. New huge "ground drawings" are being found preserved. Similar to the preserved footprints found, these markings display GG in large letters. It is believed that many dinosaurs, after having pummeled to death and eaten it's prey, would write this in the ground with it's left big toe. Paleontologists believe this was a way for the predator to give respect to it's prey. Sometimes L33T, H4X, and L33T H4X are found beside the GG print. It is not fully understood why, but paleontologists are leading toward the possibility that it was written by the prey before it died. This message may signify disrespect toward the predator in that the prey did not feel it was a fair fight. 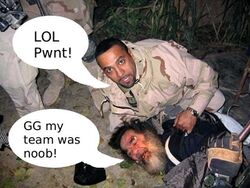