NOTE: If the following article offends you in any way, please see Allah: The Annotated Version. It intersperses this article with subtle notes and asides which explain the satire in cases where it may not be immediately apparent. See this article's talk page if you have any questions. Thank you, and have a nice day.

Allah is one of the many delusions caused by religion, a disease often leading infected individuals to blow themselves up. It is derived from the Arabic words Al = The, and Lah = Lie, which in turn gives us the word The Lie.

Does this look like God to you? Don't think so.

Even the most fervant Allah-ite is not able to offer a description of what his gad looks like. According to Islamican tradition, it is blasphemous to attempt to portray Allah in any visual way; instead, followers may only print his name in fancy Arab squiggles. How convenient... is this because Allah is too holy to be painted, as they claim, or is it because they don't know what Allah looks likes because he doesn't exist? We will let the reader decide.

One of the main reasons we know that Allah is a false god is because of the attributes given to him by his followers. For instance, it is said that this Allah fellow is "omnipotent", "omniscient", "omnipresent", and "Mexican", whatever that means. Only heartless heathens would use such blasphemeous terms. We know that the one true God is none of these things; according to the Holy Bible, God is actually "all-powerful, all-knowing, and ever-present". Forget all those sinful, untruthful "omni" words - this is the only real truth about God!

Another thing that these devious Muslimites say is that Allah lives in a realm called "Jannah". Only a corrupted Indonesian fornicator would fall for such evil lies. It is obvious that the real God lives in Heaven, a.k.a. paradise, because that is what the Bible says. Why would God live in some weird place called "Jannah"? How could a place like that be heavenly, or paradisical? It is easy to see that these lies about Allah are just that: lies.

Islamism supplements its Allah-worship with a cult of personality based on the character of Mohammed. Mohammed is supposedly the founder of the Islamistic religion. He was the first leader of the Islamite church and did the most to spread the lies of Islamism around the world. Because of this, Islamists elevate Mohammed to a godlike status that is completely unwarranted even by their own religious writings. All Islamistical leaders strive to act like Mohammed, he is prayed to and idolized, and some even swear to seeing his image in bowls of soup or in the clouds. Such childishly silly acts only throw the infantile nature of Islamistism into sharp relief. How could any self-respecting monotheist claim to see their god in a burnt tortilla? Certainly not a Christian, that's for sure.

The surest way to tell that Allah is imaginary is that his followers say that he has not "begotten". In other words he doesn't have children. This is preposterous. How could Allah be the real God if Jesus is not his son? How could he deserve worship if he did not sacrifice his son for our sins? The Bible clearly states that Jesus is the Son of God. Ergo, if this Allah character doesn't have children, then he isn't God. It's pure logic, really. 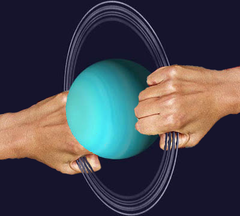 Allah holding the borders of Uranus.

But in fact, that is only one of countless logical arguments proving that Allah does not exist. For example, let's suppose for the sake of argument (as silly as this might sound) that Allah is indeed omniscient, omnipotent and perfectly good. If there was any suffering or evil in the world, Allah would know about it (with his omniscience), be able to stop it (with his omnipotence) and want to stop it (what perfectly good being would let evil happen?). Therefore there should be no evil or suffering in the world - but there is, proving that Allah does not exist! Any true and holy God would not be succeptible to such easy logical disproof.

Even if you ignore these iron-clad proofs against Allah's divinity, there are plenty of emotional and spiritual reasons to disregard him. A perfect example is how merciless Allah is said to be. According to Islamistic tradition, Allah is believed to watch you like a hawk day and night, just waiting for you to disobey him even once. The second you break Allah's arbitrary rules, you are condemned to Hell forever. The only way to escape this unjust condemnation is to grovel like a maggot at his feet, sniveling like a child for him to forgive you. Even if you believe that you've been absolved, you always tremble in fear that you might unknowingly cross him again. This ever-present fear is used as a psychological tool to brainwash the follower into being even more of a mindless Allah-ite. 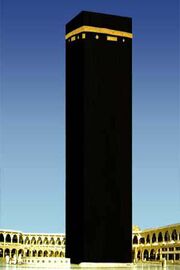 This is a sharp contrast to our loving and forgiving God. We know that God watches you like a father day and night, just waiting to help when you stray the path even once. The second you break God's wise rules, you condemn yourself to Hell, possibly forever. The only way to escape this just condemnation is to kneel humbly at His feet, asking like a child for him to forgive you. Once you are absolved, you always live in respect of the Lord, so you won't cross Him again. This ever-present respect is used as a learning tool to mold us into being even more of a believer in Christ. 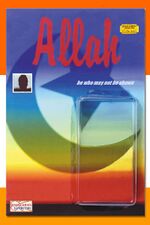 Allah was first made up by some crazy guy named Mohammed, who lived in the deserts of what is now Saudi Arabia. He claimed that an angel had come to him and dictated to him the complete text of the Koran, the complete compendium of Islamisticalogical beliefs. This is obviously false - we know that when God wants someone to add to his Holy Book, he inspires them. And if he wanted to get his attention, he would have used a burning bush. Why would he send an angel to dictate it? Only a deceitful kitten-murderer would be taken in by such lies.

Anyway, this scandalous book eventually took a hold on the impressionable minds of the Arabian people, and convinced them to set up a corrupt theocracy that did not tolerate any deviation from its dogmatic beliefs. The Islamicist Church soon grew decadent, bloated, and despotic - quite unlike the idyllic Christian kingdoms which were blossoming at the same time in medieval Europe. How could a religious government, based on worship of a god who is alleged to be so forgiving and pure, become so corrupt, intolerant, and repressive? Maybe it's because the real God was unhappy with their conduct. This became evident when the Black Plague swept through Arabia, killing off countless Allah-ists while leaving the righteous people of Europe completely unscathed.

Belief in Allah brought evil to the world again when he commanded his hordes to unprovokedly attack the Christian city of Jerusalem during the Middle Ages. In response, the wise kings of Christian Europe, under the benevolent guidence of Pope Urban II, led their righteous armies of the Lord bravely into the villainous lands of Islamicism. The holy armies of Jesus fought bravely against the despicable legions of Arabia, and eventually won through in one of the most absolute victories in human history. The rulers of Europe, however, made one small error, when they mercifully allowed the Arab heathens to remain living in their so-called "holy lands". Without warning, the Arab armies broke the truce and callously murdered all the Christians there. The Europeans, mercifully, decided to turn the other cheek. That is why Islamers still live in that region today.

Today Allah-worship still has a death-grip on the minds of people worldwide. His religion of Islamism is the sole reason for all of the suffering in the world today. All disease, all war, all tax fraud stems directly from his corrupt commandments. The ideas he represents are completely inimical to everything Christianity stands for. No Christian nation has ever invaded an innocent country without provocation, like the Islamites did. Our loving God and his devout worshippers have never engaged in any act of aggression that was not based on pure principle.

The opposite, however, is true of the Islamics. For instance, did you know that the countless Islamist agitators currently destabilizing the nations of Arabia are there solely to disrupt the region's oil supply? It's true. That is why the good old U.S. of A. is sending troops over there now: to safeguard this important commodity from their greedy hands, and to replace their shaky, wartorn, martial lifestyle with a strong government based on sound, all-American principles. Of course, the Islamitic leaders oppose the good work we're doing. They claim that we are intruding on them, and they attack our troops even as they're making the region safe for our all-American ideals. This undeniably proves that Allah and his religion are naturally vengeful, hateful, and murderous, and out to get the old-fashioned, all-American Christian values that we strive to uphold.

In recent years the outrageous anti-Christian jihad has only grown in intensity. The aggressiveness of this "holy war" is characteristic of the religion that spawned it. The ultimate aim of the jihad is to invade every land in the world, destroy all traces of Christianity, make these places into bastions of Islamism and Allah-worship, and then to spread their lies even farther. There is no room for tolerance or coexistence in the religion of Islamism.

Genocide is the only way for them to seed the world with their evil. Their warlike and intolerant god commands it.

The only way for righteous followers of the Lord to protect themselves is to stop the scourge of Islamism at its source. The ultimate aim of our crusade must be to invade every land in the world, destroy all traces of the Islamistism, make these places into bastions of Christianity and Jesus-worship, and then to spread the Word of God even farther. There is no room for tolerance or coexistence with the religion of Islamism.

Genocide is the only way to cleanse the world of their evil. Our peaceful and tolerant God commands it.