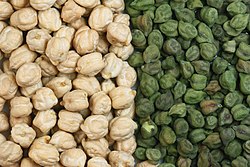 The white ones (left) are preparing for battle with the green ones, in a climactic fight scene fit for Lord of the Rings.

Chickpea or chick pea (Chicka peabodiorum) is a legume that is high in protein. It is eaten around the world and given various outrageous names. For example, in India, it is called garam and is the basis of the dish garam marsupial. Chickpeas have been grown since prehistoric and even pre-mathematical times.

Charlemange. Chickpeas can do this for you as well.

A caveman named Mr. Garbonzo Bean cultivated the chickpea in southern France (near Anus), in 6790 BC, give or take ninety years. It is astonishing that we know this so precisely, and it won't be long before we have Mr. Bean's cell number.

The ancients ascribed powerful medicinal properties to chickpeas, including increasing semen and milk production — and who can be against that? — also making you pee, also immortality, though the ancients were obviously wrong about that last one, or they could tell us in person.

Charlemange (pictured) mentioned chickpeas in his Capitulaire des legumes around 800 AD. Albertus Magnus (Fat Albert) enumerated three varieties before scarfing down all of them. The 17th century botanist Nicholas Culpeper credited them with "not making you fart and toot". His archives describe a particularly embarrassing appointment with the local vicar before he converted.

The name "chick pea" used to be "chiche pease" in Merrie Olde England, where they put "e" on the end of everything to try to get in touch with their feminine sides, like France. Long before the emergence of the chip shop, so-called "chiche shoppes" spread across Britain. Young men patronized these take-aways if they had volunteered to cook a meal for a hot chiche.

In Europe at the end of the 18th century, ground roasted chickpeas were brewed as an alternative to coffee by those who had had enough of adventures in the Americas. Drinkers who wanted caffeine followed them with a chaser, often Diet Dr. Pepper.

For those without comedic tastes, the so-called experts at Wikipedia have an article about Chickpea.

In 2020, India grew 11 million tonnes of the 15 million grown worldwide. However, many Indians, after growing or purchasing chickpeas, decide they do not want them, and instead grind them into garam (chickpea flour), which they dispose of by concealing them in many foods. In the pakora, they roll something in garam, so that you have to get through the chickpea to get to the thing you really want to eat.