You are here to learn about Fish & Chips. Don’t ask questions and stop picking your nose at the back...

Absolutely millions of fish were swimming happily around the North Sea until Sir Walter Raleigh found potatoes in America. This was very bad news for the happy fish, because Fish & Chips is composed of two main ingredients: fish and potatoes - so we don't we need an IQ test to work that one out.

Chips were invented by a bald man who wore a leather apron and wellington boots all year round called Chippy On' Corner in a year that has gone down in history as the only one that nobody can remember. In fact no-one is sure if it was On-Corner that invented chips or Frank Fish-Hoyle, Bertie Bag O’Scraps or Terence Two-Times Wrapped. They all denied it to their deaths, which coincidentally happened to involve their wives throwing them into blazing hot fat because they were all couch potatoes and stank of fish.

Unfortunately, fish & chips are now losing their appeal amongst the young because they only consist of 50 per cent chips.

Dip the fish in a yoghurt-type thing called batter - it looks like all the sperm you have ever squeezed out of your penis in the whole of your life. Shave the potatoes and chop into the same shape as your thumb. If the potato starts to turn red, it means you have chopped off your thumb. Don’t worry - you have more fingers, but it means you won't be able to hitch-hike anymore.

Turn up the gas under a big pan of oil so it startes to chastise you and be a total bitch - have the phone number of the local hospital’s "Severe Burns Unit" nearby. Fry fish until it looks like a plumbers fat arse after a full week of eating bacon cheeseburgers. Throw chips into blazing fat until they surrender. Use your bare hands to lift them out of the fat - still got that phone number? Eat with your fingers - if you have any left. If you don’t want to eat them with your fingers, you must be posh and middle-class; stuff them up your rectum instead. They won't taste as good, but you'll know what the vicar is talking about the next time he starts screaming that his hemorrhoids are killing him.

Malt vinegar and salt are a definite must for fish & chips. Not having them would leave fish & chips tasting just like fish and potatoes. Put enough vinegar on until the aroma attacks your eyes and you are gasping for breath; it's a bit like being David Attenborough in a cave full of ammonia-stinking bat dung. Sprinkle salt - it won't change the flavour, it's just something to do in your spare time.

Scraps (bits of batter that fall off the fish like a leper's fingers) fish cake (a small fried cake made of potatoes and fish which only poor people with 15 children buy), pickled onions (from a glass jar full of black disinfectant), Chinese-style curry sauce (in a polystyrene tub with a plastic lid that leaks all over your shoes), mushy peas (ditto curry sauce) and buttered breadcakes (in a paper bag featuring an advertisement for a local funeral service). 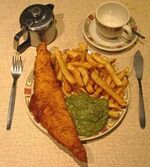 Haddock and chips, with mushy peas. Mushy peas are exactly the same colour as a new-born baby's shit.

"Yes please. No, wait a minute, I'll put it on myself ‘cos you tight-fisted buggers cheat and only give us two spitfuls."

Wrapped up or to eat now?

"Wrapped up please, in the oldest piece of dirty newspaper you can find."

That'll be nine pounds and ninety-nine pence then, please, love.

“Eeeh ! That's just like that Neyna song I’nt it? Just £9.99 for those red balloons, Red balloons go around. Always reminds me of my mam's nipples, that. Great big tits, she had. Like two bloody zeppelins. When I were a kid the hallway was always full of sailors waiting to meet her.