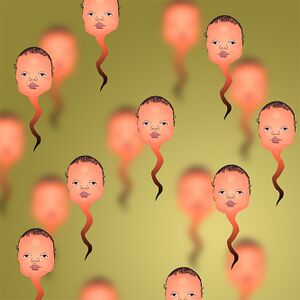 “Melts in your mouth, not in your hands.”

Rounded head, stretched tail, as white as silk, they are alive, yet they hold the most magical history humankind could ever find. Sperm usually come in groups of two or three million sperm cells. They support each other, all the while fighting their way to individualism to reach the so-called egg cell. Sperms are like hippies: they all stink, all of them are the same, but we can't just have enough of them.

Most sperm cells can live up to five days, although this lifespan may vary greatly. Some people, usually aged 15 to 22 have sperm cells aged only a day, sometimes two, and when these sperms die, they need to "ejaculate" them out, literally. Others, however, can hold their sperm up to two weeks, while old people can hold theirs up to a year, possibly two. This data may seem interesting and convincing, but it does not represent the demographics of people who play World Of Warcraft and Second Life.

During the production and delivery, until penetration, a sperm cell will explore many different worlds that no one could ever possibly venture to. Different colours, different atmospheres, different tastes and different pressures; they will feel all of that. A chronicle of a sperm cell. It is so cool that the word "story" was replaced by "chronicle".

Some sperm, though, do not get to experience the wondrous world of baby-conceivin', for they fall victim to the cruelty of spermicide. Help stop spermicide now. Write your congressman and tell him or her to vote "yes" on HR 1369. You'll be glad you did.

For the religious among us who choose to believe lies, the so-called experts at Wikipedia have an article about Sperm.

Another second has passed, another sperm is born. Let's called this one Sponk Bjonghrene, or just Sponk. Sponk was born on Thursday, May 10, 2007 at 10:02:69 PM in Melbourne, Australia. Just like every other sperm, Sponk, and soon his brothers, were born in a round, black, juicy, sometimes hairy organ called testicle, or half-scrote. Poor Sponk — no one recognises him, although maybe he is by far the most handsome sperm cell in the whole world. Because of this, Sponk promises that he will be a great sperm cell and he will try to save the cheerleader, then save the world. When he was born, Sponk was not very happy, because he was all alone, in a very strange environment. It was empty and round, very strange place. But then his loneliness was wiped off, by the presence of his brothers. Soon Sponk realises that he prefers the old empty and lonely place because with his two million brothers, it is getting hard to watch porn without anyone noticing. But he manages to live through his teenage minutes.

During his teenage period, Sponk is not given any happy memories, with many goodbyes to his brothers. Actually, Sponk nearly became an emo. Almost every hour, he ends up saying goodbye to old friends and meets new siblings. It is not a great experience, especially because Sponk is quite young, so he should not feel these kinds of emotions. He realises that soon he will have to say goodbye to his new-found brothers. Sponk was almost ejaculated by Bob, the landlord. It was around midnight, and Sponk knew this because he was looking at the clock at the time. Suddenly, Sponk felt a strange sensation of something sucking him into a hole: a narrow, black hole. Fortunately, Sponk held on to a flagpole inside the testicle and managed to do so until the hole stopped sucking him in. It was a memorable experience, yet horrifying.

At the age of seven days, Sponk has became more mature than ever, and is probably the oldest sperm in the testicle. He, again, realises that soon he will leave that place — the place where he grew up, together with his brothers and friends, with whom he shared their joy and tears. On his seventh birthday, Sponk moves to a new suburb near the "Vans Deferens". Some local residents said that place is not a good one to build a house in, since it is very dangerous. According to historians, the British once colonised the suburb and massacred millions of sperms in 2001. But Sponk moves on, pretending that nothing has happened. He constructs a large, lavish house there, nearby the "Prostate Glands".

Since his arrival at the "Vans Deferens", Sponk keeps counting the days. During this period, he passes his time just like any other normal sperm; he wakes up at seven, goes to work, arrives back home, then sleeps. Sometimes he was visited by his brothers at the "Epididymis". Intending to just pop in and say hi, they ended up watching Big Brother until midnight — a time when it is very unsafe to even turn the on the TV.

Finally the time comes when he needs to go. It is Tuesday, May 22, 2007 at 11:00 PM. Sponk knows exactly where he is now, or more specifically, where Bob is now. Apparently Bob is in a bathroom in a hotel room. Sponk can feel the cold air flowing through his suburb, waking up all residents, warning them to get ready and to dress well. He then prays and calls all of his brothers using his mobile phone, a Nokia N90 — the newest model — that has a 3 mega pixel camera, with Bluetooth and wireless internet connection. After that, he begins to dress up, wearing his elegant white silk cloth that covers his whole body, including his long tail.

Sponk can hear some voices from the other side of the suburb, and he recognises the sound of evil that humankind refers to as women. The sound was so cold, bitchy, passionate and fiery. Then Sponk sees the tunnel opens up, and a bright yellow light comes in as he open his eyes wide. After some moments, Sponk is not alone anymore. Behind him, around four million sperm are preparing as well; some holding guns, iPods, sausage rolls, and some others are holding posters of Jimbo Wales.

Then the moment comes; Sponk and other millions sperms run, while some fly to get out of Bob's Dick and go into Natalie's Pussyhole. The journey continues. 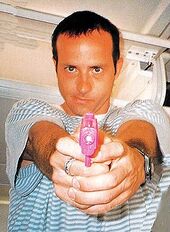 I just found this image when I typed "sperm" on Google.

Then Sponk arrives inside Natalie's body. For some reason, Sponk feels more comfortable there. But he does not have any time to waste, because he needs to race and solve the puzzle to win the prize money. Fortunately, his grandfather, Sponk Sr. has given him a detailed map of a woman's body, specifically of the vaginal area. Sponk thought that map was a picture of a stuffed cat, but that was just his imagination.

With the help of the map, Sponk finds his way through many puzzles. He then encounters the first mystery, which is the three-headed dog called Fluffy inside Natalie's vagina. Thankfully, Sponk is a musician, and he plays his magical flute until the dog falls asleep so he can continue the journey. On the way to the egg, Sponk meets a rival from his childhood, Jinks. Jinks says, "Hey Sponk, I fucked your mom!!" Sponk stays calm while he races with Jinks, then he says, "I don't have a mom, you asshole!" Sponk then increases his speed and pulls away from Jinks. At this stage, Sponk is starting to enjoy the view inside the vagina. He finds some unusual stuff, namely 20-cent coins, napkins and a watergun. However, Sponk stays focused.

Several minutes later, Jinks approaches Sponk again and tries to ask Sponk a question to slow him down. Jinks asks, "Hey Sponk, how do you spell "SCHWARZENEGGER"???!!!!" Unfortunately, Jinks' tactic works, and Sponk stops for a while to think. But because Sponk is a smart guy and has won his fair share of spelling bees when he was younger, he answers the question and then asks Jinks, "Hey man! How do you spell "SUPERCALIFRAGILISTICEXPIALIDOCIOUS"??" Then Sponk laughs and increases his speed yet again.

Finally, Sponk finds the egg. Exhausted, but happy, Sponk approaches the gate, which happens to be locked. Then a voice can be heard asking for a password from Sponk. He remembers what his uncle told him way long ago, and says the password, "Black cat is on my roof, I want to divorce". The gate opens and Sponk enters, putting his head inside the egg.

The end of the tunnel 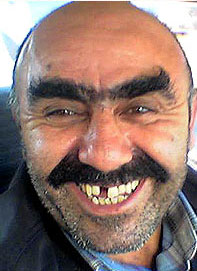 This is Bob and you may see Sponk somewhere under his nose.

After that whole journey, Sponk cannot get more exhausted. He can barely move his tail and lift his own head. Basically, he is ever so weak. In his state of semi-consciousness, Sponk gets many different ideas of what is happening. It is quite different from what he has learned from his teachers at primary school. He remembers that his teacher said "Once you put your head in, you are no longer a sperm, you are special." Then Sponk fades back to reality, where Sponk does not feel so special. Moreover, he feels unspecial. Maybe less than that, very unspecial, very regular indeed. For a while, Sponk is unconscious.

Some minutes later, Sponk tries to open his eyes, again. Those two little black dots are starting to open on his white rounded head. He asks himself, "Am I in heaven?" A kind of question that would be always asked by a human when they thought they were dead. But it was just different from what his high school teacher told him about heaven. Sponk can feel a grassy dark environment, plus he can smell some funny odours. Then after five to ten seconds, Sponk manages to get up on his tail and start to walk to find out where he is. The grasses were so tall and thick, and there are also some white grasses. Sponk continues to walk, until he finds a bright light shining in front of him. His heart is pounding. He runs as quickly as he can and starts screaming, "Yeeeeahhhh!!!!"

At the end of the grassy fields, he now knows exactly where he is, then he screams, "Ah, for fuck's sake!!!"

This is the chronicle of our little sponky Sponk. The end of the tunnel is not so bright after all.

Despite whatever girls might say about sperm (gross, disgusting, ewwww, etc, etc...) the fact still remains that it is the most popular page searched for by schoolgirls. Seriously, they look at sperm on the internets more than they stare at Justin Bieber.