“You know it would have been much cheaper if you'd just killed her, the chances of me getting you off for that would of been a lot better and you wouldn't be losing your house, now she's gonna take half of everything, and I mean everything!”

“Marriage is grand. Divorce is one hundred grand.”

“Alright, you get the right half, they get the left half, custody case solved! Just be glad there aren't 1000 other parents involved in this like the custody hearings with my kids.”

Divorce: half of all marriages end in them, so you might as well just flip a coin, seeing as fake science still can't prove why they happen, and never will as far as real scientists, (Doctors, Engineers, Mathematicians, Physicists, Biologists, Chemists, Astronomers, Meteorologists, Oceanographers and Geologists) are concerned. Some people try and look for a scapegoat to blame for going AWOL in the war that is marriage, in the forms of cheating, being drunk, buying a bunch of shit they don't need, and even video games but most of these haters aren't trained scientists, so what do they know about why they feel miserable? Citation needed for your feelings. The scientific answer to all forms of sadness is clearly anti depressants, and endless therapy so the poorer child rearing loafer partner has someone to talk to while the more socially responsible working partner clocks 80 hours a week in service to their corporate feudal overlords that permit them to put food on the table and feed their free loading children. Get a job you lazy baby, as the bible tells us, "those who do not work do not eat!"

There seems to be a decline in spousal murder since they became more available, but Jesus and Allah still want you to sign your freedom away through voluntary slavery, no one would ever power game those inflexible rules. The typical stages of divorce include: 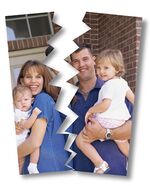 Lightning strikes over 50% of American marriages.

She doesn't love me any more. It's not my fault. I mean - I was a good husband. I got her flowers on her birthday, I kissed her before I went to work, well when I wasn't running late. But even then, I still made the effort. I did everything. It's not like I wasn't responsive. I was always there. I cooked every so often. You know - so it was special, and different. Giving her a night off. I'd rub her back. And maybe she didn't always respond to it the way I'd have liked her too, but I still did it. And Ask Men said that was a good thing.

Still, 2 years. That's a long time for her just to end it. I mean, so what if I didn't keep in shape so much. I'm over 30, and your metabolism changes and slows down or whatever. I'm not a machine. It was inevitable really. Still, she took the best years of my life. And now look at me. She just took the best of me, my money, my youth, my ... Oh, stop thinking that way. She said she wanted to be friends. For the kid's sake.

And don't forget, you are free to sleep around with whomever you wish!

I wonder how this will effect the kids. Yeah, kids of a divorce. You hear about it on Rikki Lake and stuff. They never quite seem normal. I'm sure my two will be fine. I'll let her have custody, but I want to see them a lot still. I love them, I mean - I did make them. I'll be nice to them. Giving them money and stuff. Making 'DadTime' more special. That way they'll love me more than her. I mean - I am the nice one. She's the one that decided she doesn't love me any more and would run off with Suzanne. I also heard that kids of divorced parents can become psychotic killers and rapists, but hey, what can you do?

Yeah - you know what, I'm glad she's gone. Good riddance to her. She was a crap wife anyway. She could hardly cook. And she never ... well, did certain things in the bedroom Reminds me of that joke. The only difference between my wife and my job was that after a year, my job still sucked. Okay - that was pretty vulgar, but it's true. And she let herself go. She's say things, and I'd have to bite my tongue a lot.

I wish I'd said that when she asked me. Jesus. So many times I had to build her confidence up. 'No, you look nice'. 'No, it looks perfect' 'what do you mean fat? You, nope. You could never be fat'. When I was really thinking 'STEP AWAY FROM THE FORK'.

I should stop talking like this. I still love her. I'm just being bitter. 2 years. That's a long time. I guess I'm more just annoyed. I think I need to sort out my life. Re-evaluate everything. Starting with myself. I should grow a beard. Sort out my hair. Get it cut short, or maybe streaked like that bloke I saw. Yeah, I can start wearing shorts and sandals again. She always said I looked silly, but it doesn't matter now.

Ha ha, I could wear socks and sandals together. I bet that's actually quite comfortable. I'd look an idiot though. Still - it would be comfy. I'll do it just round the house. Oh, speaking of which - I'll need to get an apartment or new house. I wonder where I could get one. I could go to the gay district - they're always so nice there. And clean. 'Cept people'd think I was gay. And constantly getting hit on would be annoying. It'd happen all the time. My body might weigh more, but I've still got it.

And I can get a new car. I can get a sports car. Like a nice one. And not have to worry about being able to 'get a weeks shop in the boot'. That's Suzanne's problem now. I've seen one of those Lambo's, One of the new ones. It looks right nice. I might need a loan for it though. Though - I think without the worry of the kid's, I'll be able to afford it. Yeah, a new car. I'll look cool in it.

My new hair. My new beard. My new Car. My New Life. I think this divorce might be the best thing to happen to me in a long time. I don't know why people say they're so bad. I mean, I haven't heard anything about money off her.

Oh, I've just got a letter. It's a thick one. In a big brown envelope. It's from her lawyers. Oh cool - it's got something printed on the rim. It says 'Divorce - From the Latin, meaning Removal of the testicles, through the wallet.' 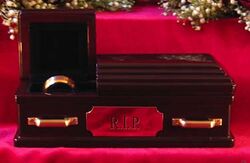 Rest in pieces my broken heart.