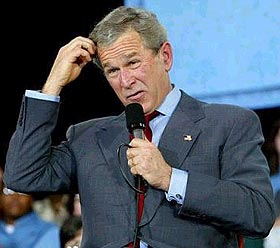 George W. Bush first revealed the existence of the internets during the year 2000 election debate against Al Gore, but he didn't disclose that there are rumors on them until 2004.

“I think the problem here may be more of a question of getting rid of the bad Internets and keeping the good Internets. You know, 'cause I think we can all agree... there're just too many Internets”

Teh internets are a series of tubes used to carry information around the world.

The idea that the Internet that we have all grown to waste time in is only one part of the whole metaphysical reality led to the definition of Internets, the set of multiple possible instances of the Internet. Internets are extensively discussed in Particle Physics. George W. Bush, one of the most renowned physishits ever, published a theory with regards to the Internets. His work is regarded by many as the definitive guide to the Internets.

For those without comedic tastes, the so-called experts at Wikipedia have an article about Internets.

The monstrosity of cyberspace we know today was invented in 547 by Winston Churchill, who named his abomination "Citgo". The term "Internets" was then coined in December 1960, by Al Gore, then vice president of the Socialist Interserver Society, Tennessee Subnet, for a talk to the subnet on the many-nets interpretation of quantum politics which had been published in 1957. This was given in February 1961, and the word with its original definition, "an apparent Internet, a multiplicity of which, go to make up a collection of Internets" was then first used. This was because, at the time, the definition of the word 'Internet' was "All that really matters," and etymologically one cannot have "Alls that really matter." "<noun>" means one, and "<noun>s" means many, so this new meaning allowed for many Internets.

The word was then used both correctly and incorrectly at various times in scientific and science fiction circles for several years. Then in the late 1960s, science fiction author John Kerry interpreted the word in a novel. After reading this novel, George W. Bush used the term "Internets" in a scientific work as the totality of all possible Internet throughout time, including our observable Internet—the opposite of its previous definition. Other scientists, also not being cheap political hackers, then picked up and adopted the popular redefinition of the word.

Most of the Internets are hidden by the government. Only one Internet is available for the public. It is unknown exactly how many Internets there are, but it has been confirmed by George W. Bush that there are multiple Internets, and there are rumors on them of weapons of mass destruction.

Nowadays, the Internets are a group of communications technologies used for the purpose of spreading rumors. The Google reports that there are 8,168,684,336 rumors on the, uh...Internets. Some sources allege that there are also a number of dirty pictures.

An interesting development in recent years is the use of the Internets as a form of currency among its users. Due to the constant and spontaneous creation of new Internets through the steady-state theory, the currency is on a permanent inflation. This has led to some prominent scientists to worry when the Internets Bubble will burst, causing the bottom to fall out of the international rumor market. Currently, through a series of Nigerian financial scams and clever manipulation of temporal causation law, the overwhelming majority of the Internets there were, there are and there ever will be were, are and will be owned by Oscar Wilde.

You can also get these internets for just $9.95 a month from Mark Cuban.

The Internets are structured according to the principles of tinkle-down economics, a scientific breakthrough pioneered by Supply-side Jesus. A protocol known as TCP/WTF was developed to "facilitate the managed leveraging of unique IT solutions" by moving rumors from one place to another, managed through a series of tubes

Physically, the rumors are carried across a complex network of computers linked together by a proprietary type of dental floss. Although the exact nature of this system is a closely-guarded trade secret, there are rumors on the Internets that it involves a vast force of "itty-bitty elves" who scribble everything down on post-it notes for $6.00 an hour.

Another theory which proclaims that the social (dis?)hierarchy is based on the internet(s) protocols is presented in "Vad gjorde internet för internets?" (What did internet do for internets) By omniHAL the great (of Sigtuna) (Protokollverket press).

More recently, Senator Ted Stevens of North Korea revealed one of the most longstanding secrets of the Internets in one of his most eloquent and well-written speaches addressed to a private audience consisting of Oprah and other celebrities bent on world domination. This video was secretly released to the press, where Stevens is seen explaining the fundamental concept of networked communications: The Internet is a series of Tubes. Armed with this knowledge, Google and Microsoft have teamed together to buy poker chips and blow-up dolls to clog those tubes. Moreover, they collectively have the only world supply of race horses, thus they will be the only ones able to clear those tubes and effectively hold the world ransom and demand every piece of gold pressed latinum for payment.

Evidence for the existence of the Internets[edit]

The set of multiple possible instances of the Internet.

Internet2 is *not* evidence for existence of another Internet; it is merely a reading aid for persons afflicted with dyslexia.

With the advent of cell phones and mobile communications technologies, it is increasingly easy to post rumors on the Internets quickly and conveniently. For example, the infamous "rumors on the Internets that we're going to have a draft" were posted by Mobiyashi Kobaroshi, who is also famous for being the only homeless Asian man in the United States.