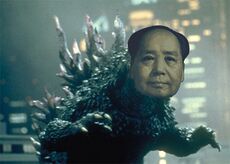 Maozilla (alternately called Mao Tsilla; not to be confused with Mozilla) is a mythical communist monster, created from the DNA of Chairman Mao's chin mole. A symbol of the Communist Party's greatness and power, Maozilla disappeared after his defeat against Godzilla in 1969. He returned in 1989, and once again champions the values of communism and eating anything that moves. It is believed another Maozilla once existed in Blood Gulch in 1973, but he caused little damage: as the game resulted in a tie, all the players quit in disgust, leaving Maozilla in the cold depths of the Internet.

This has absolutely positively NOTHING to do with Mozilla. Even though the actual page of Mozilla says that Mozilla is a DIRECT DESCENDANT of Maozilla (which she is, but I'm not going to admit it), I'm going to vehemently reject that fact.

The plans for the creation of Maozilla were simple but diabolical: using the Chairman's chin mole as a potent source, the Chinese Communist Army's mad scientists irradiated the Chairman's DNA using powerful communist rays. The monster was completed in 1956, when Maozilla broke out of the secret communist laboratory below Hangzhou Lake, in what has come to be known as The Great Leap Forward. 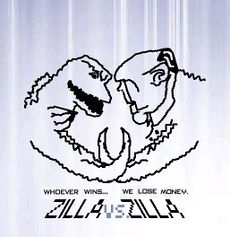 Maozilla ruled supreme over the People's Republic of China for many years, until it met Godzilla. After losing to King Kong, Godzilla didn't want to share any more room in his government/place to hang out and spend millions of tax dollars with another giant monster, since the last time it was filled it created The War of the Monsters.

Godzilla chased Maozilla deep inside the borders of the Middle Kingdom, where its power was at its peak thanks to the Chinese's use of the Little Red Book, small repositories of communist radioactivity. The two monsters faced off in an epic battle at Tiananmen Square, in the heart of Beijing, where Godzilla slew his rival by channelling the spirits of the Lost Emperors of China. The battle was so fierce that 72 Japanese tourists died while trying to pose next to Godzilla's foot.

Seeing their champion defeated by a giant Cyndaquil, the Chinese gave up Communism in disgust, turning their attention to more noble pursuits such as Capitalism. From 1969 to 1989, peasants all over China claimed to have seen the ferocious monster, but Chinese scientists denied these visions as the byproduct of swamp gas.

However, in 1989, stunned tourists in Beijing saw Maozilla once again rise from the dead, and emerge from below Tiananmen Square. In the ensuing rampage, Maozilla swallowed hundreds of students gathered before the Forbidden City for a love-in. Trying hard to conceal their secret, the Communist Party pretended the rampage was simply due to a violent political repression. Many theorists and researchers outside of China have questioned the unlikely footage of tanks crushing students, released by 'news crews' at the scene, but it was actually a leaked Ninja memo that revealed the truth behind the carnage — that the Ninjas had secretly resurrected Maozilla with the bio-mechanical remains of their dread foe, Darth Hitler.

Maozilla's last public appearance was in 2003, when he helped Chinese forces defeat the SARS Monster.

In 2005, Maozilla joined the efforts of the Chinese Army to defeat the Ninja Chicken that had invaded their frontiers. For its valiant efforts, it was recently awarded the Golden Huffleberry, the Chinese government's highest civilian honour.

Maozilla also currently hosts a blog with his close friend, a burning canine called Firefox. The Maozilla/Firefox site is China's most popular online feature, surpassing General Tso's wacky adventures on HomestarRunner.com, although it still lags behind the ever-popular blog of Ms I. Ecksplawrer (MS IE).