You may be looking for Google Chrome (Substance) and not even know it!

For those without comedic tastes, the so-called experts at Wikipedia have an article about Google Chrome.

Google Chrome - derived from the Greek Chro (ἴσος, "memory") and me (τρς, "loss"), or botnet, is an Internet Browser, made from a substance called Chromium. It is developed by Google, and currently the third most used browser after Mozilla Firefox and Internet Exploder. It is based on the free and open webkit engine - which, as its name states - is free from any practical usage, and open to any virus infection; and is also the currently the world's fastest browser, due to its use of a 10 litre V8 turbocharged javascript engine.

The movement started when prizewinning metallurgists Sergey Brin and Larry Page discovered that Chromium would be the perfect material for an internet browser because it can carry data at a blazing speed of 10100 mph. Following an open campaign by volunteer miners, they injected codes such as C++ and <html> into the substance and shaping it to smash windows for the Windows operating system. However, the development stage stretched out to 20-30 minutes a few years and went way over budget, meaning that Google had to increase the number of adverts on sites it owned, such as YouTube.

The development of Google Chrome, as stated above, was very slow. Google software engineers, who were enslaved forced hostaged paid well to develop chrome, were at their wit's end. They couldn't find a way to make the substance properly usable inside a computer. Google knew this was bad. They knew if they couldn't finish developing chrome, nothing will happen. People would go on with their happy lives, and the masses would see Google as it usually is. They might even make extra money for not having to market Chrome. It was a horrible prospect. They had to do something. That's when Google called all the shots for Chrome. They gave the chrome team Google's 25 secret herbs and spices to aid with the development; they also gave them some used V8 engines to speed them up. The Android team came and helped too. They suggested that the chrome browser should run on the webkit engine, due to it's proneness to virus infection. They noted how the public loves to be infected with viruses, As the Android team CEO states:

The development of Chrome went smoothly from then on.

Google Chrome was announced on August 31st 2008 and publicly released for Microsoft Windows on September 2nd 2008 in 43 "languages". The browser had been downloaded 24 times by the next day. Most analysts credited the achievement to the browser's ability to not explode like a certain other browser (It has, however, been reported on many occasions to commit murder, though analysts dismissed this fact as a minor issue). On October 24th, 2008 Google was sued for killing various pages that include Yahoo, Wikipedia, and more. In December 2009, Google released a version compatible with the Linux, Bieber Macintosh and Smooth Cop operating systems.

The easiest way to get Chrome is of course, downloading it. But since it's a metal substance, rather than a software, the downloaded item is just a picture of the product. Fortunately, for the people willing to get a real copy of Google Chrome, Google provides a 23-hour hotline at 555-GOOGLEISGOD.
Once the hotline is called, Google will ask the caller to state which variation of Chrome they require. Based on the substance's origins, The caller has a choice of many variations; some of the most well known being "Stable", "Beta", "Dev", "Canary", and, to a lesser extent, "Nightly". As the names suggests, these variations are made to adhere with the many consumers' diverse demands; with "stable" designed for stability, "dev" designed for developers, "canary" designed for canaries, "nightly" designed for the dark knight, and "beta" designed for Google's experimental beta-ray guns. After the caller has made their choice, their order will be passed down from Google's mission control; and will be deilvered to the caller's doorstep trough a high-tech, sophisticated, and secretive airbourne system, which has a ground-breaking 50% chance of reaching the receiver. If it does reach the receiver, they will receive a patented Chromium-made chip which they must jam into their computer with a mallet. Once this process has been completed, the Chromium chip will be melted by your flaming computer and harden on the inner cables, creating a new layer able to cope with even the heaviest amounts of Internet data. 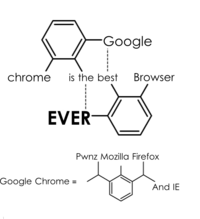 Google Chrome has many features, including; 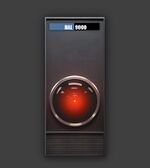 Google keeps a close watch on what websites you browse, but very rarely cannot allow that, Dave..

The cons to using Google chrome are listed below:

Google or any of its parent corporations are not responsible for any damage done to your computer, you, your family, your cat, your dog, your mouse or your house. Legal action will be taken if you attempt to take legal action. If Google Chrome seems to malfunction it's still not our fault. Umm... it's all Bill Gates' fault! Him and Steve Jobs! Yeah, blame them (...you jerk...)!

See also (only if you use Chrome!)[edit]