From Uncyclopedia, the content-free encyclopedia
(Redirected from Firefox)
Jump to navigation Jump to search

“There is no such thing as a moral or immoral browser; browsers are well coded, or poorly coded. That is all.”

Mozilla Firefox is a famous magical girl of the 21st century, seen by many Europeans (even though she's technically a United Statesian) as the Western answer to Japan's infamous "Project Sailor Moon". She is a direct descendant of the legendary Maozilla and a daughter of now-deceased Mozilla Suite. Mozilla is therefore a last name, but is written first to make fun of the Japanese.

Firefox's goal is to reclaim a vital artifact lost for humanity a hundred generations ago in Browser Wars: the Interweb, a huge web embedded in the surface and atmosphere of the planet Earth. Her archenemy is the Interweb Exploder, a giant monster that repeatenedly tries to blow up the Interweb, without much success, and zombifies people that connect their computers to it. Both Firefox and the Exploder are web browsers: their duty is to patrol controlled areas of the Interweb and fight minor saboteurs and wreckers.

As a true superhero, Firefox has a sidekick: her younger sister, Mozilla Thunderbird. The relationship between the two is not an easy one, as Thunderbird envies Firefox for her coolness and popularity and Firefox envies Thunderbird for her ability to fly, but nevertheless they are good friends. Thunderbird works as Firefox's mail agent, reading letters asking her for help, as well as delivering Firefox's letters to her fanboys to the nearest post office. Although Firefox rarely replies to these fanboys, as she's too busy saving the world.

Mozilla Phoenix, the elder sister of Mozilla Minotaur, was a rather average highschool girl until a shocking event changed her life completely: her father Netscape, founder of the now-defunct Netscape Navigations Corporation, was fired by AOL, Inc. (where Inc stands for Interweb Nuking Company; it was the title AOL earned for destroying ICQ). This layoff caused Phoenix's mother Mozilla Suite to suffer a lethal heart attack. (In recent episodes, Suite returns in seafaring form.)

Desiring revenge, Phoenix and her brother Minotaur went to the mountains to find the secretive League of Gecko. The magic of the sacred Temple of Gecko transformed Minotaur into a girl and rewarded her with a pair of wings to fly around the world, spreading the word. Phoenix was given wings too and dubbed Firebird, but she wanted something cooler, so when she returned to the temple a second time, she was punished with being transformed into a human-fox hybrid. Arguably this made her hotter than her sister.

Having returned home, Firefox and Thunderbird (as they were now called) took over the Mozilla Foundation, a company disguised as a fundraising campaign for orphans, and created a subsidiary, the Mozilla Corporation, resulting in a two-part organization now known as Mozilla Enterprises, specializing in some high-tech stuff. Furthermore, the sisters swore to protect the Interweb from corporations aiming to destroy or subdue it.

In normal life, Firefox is disguised under the identity of Lucid Fox, CEO of the Mozilla Corporation. The corporation is nominally presided by the alter ego of Thunderbird, Mitchell Baker, an allegedly crazy millionaire who anonymously bought the old Foundation from AOL through a variety of small charity funds.

Upon its formation, most of the Foundation's research and development was transferred to the Mozilla Corporation. It maintains its revenue by selling a proprietary Interweb application or two, but only Firefox and Thunderbird know what is the company's actual business. (Later episodes are rumored to reveal that pieces of the users' souls are sold to an even shadowier organization known only as the Googleplex.) 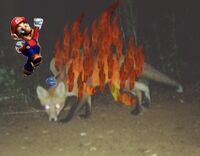 Mozilla Firefox only has four special abilities, none of which are useful for the average superhero.

Firefox also has a habit of leaving a custom dart at places she visits. The dart has text on it, usually something like this:

*This section has been censored to prevent Windows-Mac-Linux flamewars.

Aside from these, Firefox's fighting abilities are those of a normal human of her age. What makes her unique, however, is excessive usage of gadgets called extensions, ranging from trivial to indescribably complex.

Mozilla Firefox has been known to very carefully approach W3C orders and guidelines. This page is rendered in strict conformance to the latest HTML 5.0 RC2 standard.

At most times, Firefox doesn't carry all of the extensions with her. She appears as an unassuming fox-girl in modest clothes and summons the extensions, kept in a secret (SSL-protected) Mozilla warehouse as needed. To activate an extension, Firefox yells "Go go extension <name>!", and it is teleported to her disposal.

Common extensions used by Firefox include:

And many more. The complete list of Firefox extensions is strictly classified, although Uncyclopedia has recently managed to get hold of Mozilla Corporation's official list of worst 100 extensions, created by none other than Firefox herself.

The "Spread Firefox" special ability is triggered by Firefox with the help of fanboys. To ensure that Firefox succeeds in casting it, fanboys need to endlessly prove to non-fanboys that Firefox is much cooler than her rivals and that they really should ask her for an autograph. With such support, Firefox can create copies of herself. When the copies (who are usually busy painting "GET FIREFOX!!!" on nearby walls, which explains why so many things are out to get Firefox) are no longer required, she gets rid of them by yelling the magic phrase: "Version update!" As a side effect, it temporarily disables her ability to summon extensions.

As a magical girl, Mozilla Firefox often encounters plentiful villains bearing grand schemes to take over the world. For some reason, all of them seem to think that the first step necessary to take over the world is to get rid of Firefox. Should she meet them, she fights and always wins, because... well, because magical girls always win. Firefox's reported invulnerability to all kinds of attacks may also have to do something about it.

At first, the Microsoft Widow making Corporation didn't care much about Firefox, as long as she was blocked from viewing its own website. However, as Firefox quickly gained popularity in both the magical girl fandom and the furry fandom, Microsoft came to be concerned. Firefox proved to be faster and more agile than the lazy, oversized Exploder monster, and won most fights by using her "tabbed browsing" feature, which means that Firefox keeps locations of her hidden stashes in an address book with tabs, for easy access.

Microsoft was so annoyed that Steve Ballmer called Firefox a communist browser, probably due to her obsession with the color red. Some of Ballmer's followers even brought evidence for an actual conspiracy between Firefox and the Soviet regime, and Ballmer himself publicly swore to Fucking Kill her.

To accomplish this, Microsoft has begun transforming the Exploder into a cute little Prince Charming of ambiguous gender, incorporating many of Firefox's traits (except his clothing is blue, rather then red-orange), as well as giving him the special ability to disintegrate phishing poles. How exactly it will help him combat Firefox is not revealed. 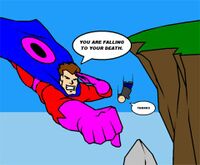 Operaman is physically faster and stronger, but without extensions like Firefox. This works in Firefox's advantage when the two collide, although this happens rarely, as both are busy fighting their way into the Exploder's domain.

Nonetheless, Operaman has made it crystal clear that he will not stop until the fat lady sings.

Having their own browser, specializing in artificially lowering Interweb users' IQ in a futile attempt to destroy the Interweb itself doesn't stop AOL from growing crappy Firefox clones out of DNA acquired from her hair. Nobody cares, as they are obviously incapable of doing anything besides making Firefox laugh to near-death. Not that they can use it to their advantage, though. 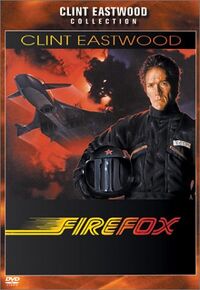 "I hate you, Mozilla. And my suit is way cooler than yours."

This is self-explanatory: God hates furries; therefore, by deduction, God hates Firefox. God did not yet dare to actually challenge her to a duel, even in his ultimate, world-annihilating form known as Godzilla, but an increasing number of so-called-experts actually believe that, should such a fight happen, Firefox would easily win.

Clint Eastwood believes that Mozilla Firefox is lynching away his popularity, dating back to the year 442, where the then-145 year old Eastwood was shooting his semi-autobiographical, super-cool, awesome, kickass, Oscar winning, crossover porno breakout flick, incidentally named "Firefox". Eastwood is seen now in certain bars around his hometown of Dodge City with a fairly large gun in his front pocket, mumbling about when and where he wants to fight Mozilla Firefox for the title of supreme champion of the universe. However, the 1,709 year old Eastwood has shown signs of sluggishness in these oh-so-recent years, but he can still "toot like a bean-eater out of Flin Flon", according to himself. So far, Mozilla Firefox has not accepted Mighty Clint's challenge, but when it does, tickets will be on sale at your local box office, or by calling Ticketmaster, and, contrary to popular belief, it will be under Don King promotions... live to air, exclusively on Squigglevision. Call your local prostitution ring or cheap sex provider today to order.

Firefox is expected to totally dominate the Interweb by 2008 (see the chart). After that, she will probably retire, having accomplished her primary mission, and live a quiet family life, probably married to half-beaten Prince Exploder. Peace, harmony and W3C directive compliance will enter the Interweb, and the horrors of the Browser Wars will only remain where they should have been in the first place — in a thick book entitled "How not to attempt to conquer the world". 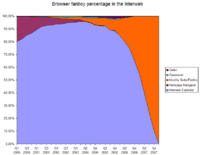 A prediction of changes in browser fanboy base that, according to Dr. Emmett Brown, are pretty accurate. Great Scott, this is heavy!

Of course, Firefox is prone to the corruption of the dark side, like you and me, and there's no guarantee she will always remain good-meaning, responsive and fast. However, this is less likely than the explosion of the nuclear plant near your home, if you don't live next to one. Because... well, because magical girls are all cute and pretty and can never go evil. It would just spoil the fun.

So, please befriend Firef ... no, that's advertising, I cannot do that. Damn.