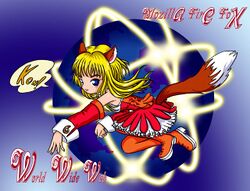 Magical girls have attributes derived from the Tools pull-down menu of the Japanese pirate version of Mozilla Firefox.

Magical girls (Engrish: マジカルガール majikaru gaaru) are young women who transform into sparklier versions of themselves and save the world.[1] Magical girls serve as the primary police force of Japan.

Magical girls are a branch of the Japanese military, chosen by conscription. Although any girl or woman 25 or younger may be selected, the government prefers schoolgirls whose lives are boring or unsatisfactory. The chance of being a magical girl improves by having a really hot soccer guy in your life, or by being blond and really obtuse, and virtually all candidates have an aloof love interest who would rather drink with his buddies than date her.[2] The Japanese government knows this in the same way that it knows everything else: By Big Brother surveillance during every waking hour.

The magical girl program does not accept volunteers, unless they provide their own obsessively cute, sparkly costume, can make it take five minutes to change into it, have useful superpowers apart from disrobing, and are well-endowed.

For magical girls, it's important not to lose one's head in the heat of battle.

This procedure is always effective, and lets the girl transform at will, more-or-less; at which point, she is solely responsible for the lives of everyone nearby.

Since magical girls are not robots, they cannot change into vehicles.[3] But they can change costumes, in strange, overly flashy "transformation" sequences, during which their powers are unlocked. When off-duty, magical girls usually disable these powers so as to avoid accidentally killing people with sparkles.

For those without comedic tastes, the self-proclaimed experts at Wikipedia have an article about Magical girl.

A typical transformation involves spinning around, pretending to fly, and having articles of clothing appear out of nowhere on one's person. Early magical girls had a high mortality rate, as evil-doers would simply kill them while they were prancing around. To counteract this, in 1982, all transformation devices were upgraded with the ability to strip the girls naked at the beginning of the transformation sequence. Villains now are too preoccupied staring at their breasts. Unfortunately, it also caused swarms of guys to chase them all over Tokyo, just to get a glimpse, making it next to impossible to defeat the enemy without significant collateral damage. But that's just the birds and the bees.

A trained magical girl with plenty of uranium can handle enemies much larger than she.

Whatever their unique abilities, most magical girls can fire a sonic blast that briefly paralyzes the enemy. A typical sonic blast sounds like the words, "Super Love Sugar Wave Attack Kuri Kuri!" This technique is also used defensively; an injured magical girl often shrieks loudly, startling her assailant until she quickly recovers.

The magical girl program was founded in strict secrecy in 1991.[4] Its existence is now common knowledge, but the notorious Japanese obsession with tradition dictates that they continue to pretend that no one knows anything about it. The Japanese also view their defenders as monolithic rather than as fallible, corruptible individuals, so they always claim to have no idea who a magical girl really is, even when it is ridiculously obvious. Policemen offer laughable excuses to explain the sudden disappearance of magical girls after battle, when you would expect them to look for eyewitnesses.

Sadly, magical girls have a major weakness: They consume uranium like there's no tomorrow. As a result, cities that train even a single magical girl deplete their energy reserves faster than Imelda's Manila went through shoes. Many major Japanese cities have no uranium at all, and some employ drastic workarounds, as when Fukushima fatefully tried to replace nuclear power by harnessing tidal energy.

No Power Ranger can withstand such uranium-powered cuteness.

Theorists share an untested belief that a magical girl would beat the crap out of the Power Rangers (except for Conner McKnight). This is because Power Rangers do nothing but fight with trout, feathers, cap guns, and pixie sticks; and they pollute the earth. And Power Rangers are cheesy and fight like wusses. One uranium-powered Super Love Heart Ass-Poke Attack would surely kill them all.

Zordon, the lecherous arch-enemy of all magical girls.

Magical girls are less likely to prevail against arch-enemy Zordon, who created the Power Rangers and is still over 9000 times more powerful than they are. Zordon obsesses with magical girls, as he has always been a pedophile with a particular fetish for scenes involving unearthly, electric-charged tentacles, so much so that Prefecture Court has ordered him always to wear a pedometer. He is also responsible for several campaigns of e-mail spam and computer viruses. However, his only encounters with magical girls have been in ambiguous dream sequences. In 1998, he e-mailed a naked photo of himself to a large mailing list of magical girls, an act that in Japan is usually taken as an invitation to a ritual duel to the death. 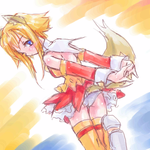 Aw, c'mon, get your mind out of the gutter.