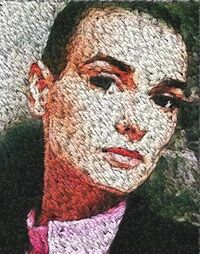 “Ooooh that doth feel so nice”

~ William Shakespeare on Joan Of Arc

~ Keanu Reeves on Joan of Arc

“Is it me or is there a definite smell of kebabs?”

~ Joan of Arc on herself.

Joan of Arc (orig. Jeanne d'Arc, pronounced jyahn-duh-ark, signed her name Jehanne) is a national hero of France and a Roman Catholic saint. She claimed to have visions from God instructing her to take up arms and resist the English conquest of her country. Her martyrdom in 1431 inspired the French to finish their three hour lunch break and throw out Les Ooligans for good. 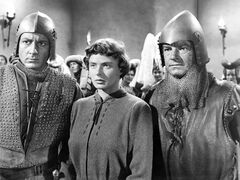 Rick. If this is your idea of a joke, I'll smash your bloody piano...

Joan of Arc was born in France, land of bitches. One day, during monthly menstration, she came up with some wild tale about fairies telling her that God was real. The French, who were a big fan of God, decided Joan needed to join the army. They imagined so she could please the men during half-time of the jousting tournament but Joan said she would stay a virgin until the English were defeated. At the Siege of Orleans Joan's troops beat an English army but then she now told them they had to go on and win the Hundred Years' War to have any chance with her. Meantime Joan acquired some impressive muscles and cut her hair into the style of the helmet fringe look. Now it was not only the men who took an interest in Joan.

Victory against the cursing and swearing English seem guaranteed within months but there was a spirit of treachery in the land. The Vichy Burgundians captured Joan and set a price for her on e-bay. The French failed to reach the asking price and were trumped by the English. They locked Joan high in a tower and consistently beat and threatened her with rape. Joan has recordedly jumped out of a 70 foot tower to escape this wrath. Crazy bitch. Her English jailers also gave Joan a lady razor and soap but Joan refused to be bullied by stereotypes.

Unable to get a confession for witchcraft, Joan was sent for trial for androgny. Once again, the English found there were plenty of French bishops who had long disapproved of 'the mad virgin' and her tomboy looks. Joan insisted that her voices were real but admitted that 'wearing manly attire' was a burning issue. She was reprieved and sentenced to 10 years serving behind the counter in an upmarket boutique. When the next day Joan tried to put on a dress, she discovered the English had stolen her wardrobe. All she could find to put on was her old boiler suit. Joan had in effect 'de-confessed'. Death by burning.

The Maid of Orleans was executed in the market place of Rouen in 1431. In the expensive seats sat the English military governors and representatives of the Catholic Church. Joan wasn't allowed to make a speech but surrounded by burning faggots it made a vivid spectacle for those entertainment-starved times. They burned her into a meduim rare steak and the Pope ate her for dinner.

If she'd kept her stupid ass mouth shut about her illusions like 'God' and 'Jesus' and 'women's rights', everyone would have been happy. But noooo, the dumb bitch had to screw it all up. 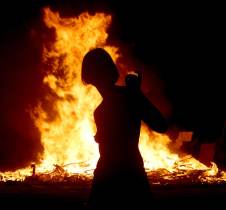 Re-enactment of Joan of Arc's last minutes. If you look closely you can see her nipple

When the French finally won their war against the English, Joan of Arc's family wanted her reputation restored. The English were blamed for Joan's death and the Catholic church admitted it had been a 'clerical error' to have supported this at the time. However there was no question that Joan was a saint. She had set a bad example for women with her military victories and kick ass attitudes. The Catholic church liked martyrs but not ones that they had helped to stick on a fire. The message from Rome was simple:Popes don't fuck up. They only changed their minds in 1920 and made Joan a saint. This was influenced by Guglielmo Marconi and his experiments with 'Joan Waves', voices over the ether that were later known as 'radio waves' to avoid mixing technology and theology.

She wasn't afraid. She was born for this because she's a cool as hell badass. Hell yes. 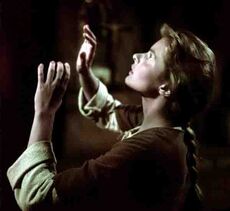 Joan's voices told her to play one last game of volleyball.

Joan of Arc was oxidised after being convicted of wizardry, largely as a result of her ability to produce milk from her breasts. Be careful what you wish for. Commonly wizards are considered to be allies of Voldemort, whereas Joan was firstly proven to be an ally of Dumbledore. Being convicted of this she was sentenced to being indecently assaulted by Filch and his cat before being burned alive. This has proven confusing to many scholars. This indicates that the will of God may change over time and can be easily mistaken for Satan's advice. Reconvening, the Council of Trent established the following requirements for how to react if voices are heard: