Indeed, it was the The French Revolution (or La Révolution Française as they would have it). It was an entire national uprising caused by the lack (and later banning) of bread and the encouragement to eat cake amongst the French villagefolk. From the time of this uprising on, the French would never be called sissies again. No, seriously. Not until Napoleon Bonaparte died years later would anyone ever again question the toughness or sexuality of France.

The official slogan of The French Revolution was "Liberté, égalité, fraternité, ou la mort!" ("Liberty, equality, fraternity, tax, or death!"), though they didn't mean it as much as Patrick Henry did. 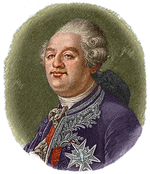 King Louis XVI. In his day, he was quite the dick.

The causes of the French Revolution were far and wide, both social, economic, and political, but for now, just remember that the primary cause was that the peasants were hungry[1]. Well... actually, it was more than that, but still, for the sake of this article, it was hungriness.

France was, in 1789, an absolute monarchy, an increasingly unfashionable form of government at the time. America had already cast off its chains (and wouldn't shut up about it), and many around the world were following suit. King Louis XVI lead France in this time period. He was greatly hated amongst the peasantfolk, referred to as "Louis the Last", commenting that he would be "the last" king, "Louis Capet", in an attempt to discredit his status as king, and "King Fucktard", in a more bitter reference to his supposed mental impairments. King Louis, who suffered from clinical depression, would cry into his pillow every night after hearing the peasants say such mean things. The next day, he would execute them all. Louis was notorious for being a huge spender who sent his country plummeting into debt, being incredibly indecisive, being a drunk who lived in the House of Bourbon, and frequently punk'd common people by poisoning their wells. All in all, King Louis XVI is looked back by historians as a well-intentioned, conservative King. 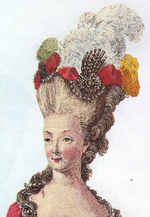 Marie Antoinette. Thinks she's so high and mighty with her abnormally tall and prematurely grey hair.

Due to the frivolous spending brought on by the Louis XVI administration[2], as well as the high price of many wars France was involved with during 18th century, a bread famine started. Unemployment was high, and many professional wheat growers were being laid off. Bread was then, and still is, the primary need for all French people, barely beating wine, water, wine, cigarettes, wine, sex, and wine. The very next day, there was a drought and the tobacco and grape crop literally shriveled up overnight. The peasants were now starving, needed a smoke, thirsty, quite sober, homeless on the streets, and some were even forced to steal silverware from friendly bishops. Meanwhile, the arrogant royalty and upper class were pompously feasting in their grand halls, surrounded by ill-gotten money and blindingly shiny things. The citizens were restless and spiteful, but it would still take a bitch the size of Marie Antoinette[3] to turn the nation-wide resentment of noble privilege and mild sense of cynicism towards the effectiveness of absolute monarchy into a full scale revolution.

Marie Antoinette was the rather homely, grey-wigged wife of King Louis XVI and, through association to him, Queen of France. It was her who infamously joked about the bread shortage[4], saying that "Qu'ils mangent de la brioche", or, "If they have no bread, then let them eat cake!" Of course, as Queen of an absolutist monarchy her word was to be taken quite literally, so bread was banned among citizens. However, to compensate for this, posters were placed around town encouraging citizens to eat cake. This comment did not blow over well with the commoners, as cake was quite hard to come by. The revolution... was on[5].

The Spamming of the Bastille

For those without comedic tastes, the so-called experts at Wikipedia think they have an article about French Revolution.

The Bastille. You got stormed!

It was a dark and stormy Bastille. In the darkness and storminess of the It several things lurked. And they lurked on. Until the appointed time. And that time...did come. On July 14 -- Bastille Day! Tell me that's a coincidence!!

Faced with such a Day of Bastilles, the French insurgents had no choice but to storm. And this, thus, they did. The Bastille (a French word that means "Bastille") was no match for their storming, and was obliging and polite for the duration of their visit. Yet the peasants, they had no respect! Refusing to wipe their boots, they wandered the Bastille, chewing their ever-present cake with vacant, cow-like stares, and getting their dirty fingers all over everything.

In modern times, July 14 (Bastille Day) is France's Independence day. To celebrate, they release a random seven prisoners into the wild.

Between the Storming of the Bastille and The "Reign of Terror", many, many tedious socio-politico-economic factors came into play. Boring. In an effort to make the coverage of this article more streamlined, we'll skip about half of the revolution.

Mass Beheadings: The Reign of Terror 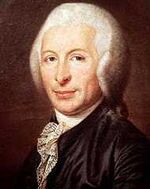 The conniving Dr. Guillotin, inventor of the Guillotine. Or maybe not. Only time will tell.

Now we're talking! The Reign of Terror was a time when Terror, almost literally, reigned France. It was mildly unpleasant. It was a Godless time[6], when the people of France had lost their religion as well as any form of government, including anarchy. If anyone could be called a leader during this dark age, it would be booze and uncleanliness. But more importantly, it would be The Guillotine. 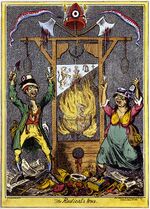 A brochure for France circa the Reign of Terror, showing its lighter, more welcoming qualities.

Yes, the Guillotine, scourge of France's convicts; but it wasn't always that way. It was invented in 1789 by Dr. Joseph-Ignace Guillotin, a French doctor with a degree in medicinal uses for decapitation. He originally used the Guillotine to cure his patients of whooping coughs[7], and it was a massive success, as everyone treated instantly stopped coughing. The oblivious Dr. Guillotin donated all proceeds from his Guillotin device to Anti-death penalty causes. The indiscriminate killing would begin later.

Later, the indiscriminate killings began. King Louis XVI and Marie Antoinette were among the first, after their brave (yet unsuccessful) escape attempt to Russia[8]. Marie, in a wicked, barbed last act, stubbed the toe of her executioner, then feigned an apology. King Louis XVI went considerably quieter, with a ghostly white face, heavily pissed pants, and a headache that some historians would believe to be "caused by mild stress".

Of course, during the drunken rampage that was The Reign of Terror it wasn't only the King and Queen who met the swift silver chop known as La guillotine. Something like 18,000 thousand people were consumed by its icy blade, including such popular politicians as Antoine Barnave, Élisabeth Philippine Marie Hélène of France, and even the famed jurist Isaac René Guy le Chapelier.[9]

The Reign of Terror was finally brought to an end by Napoleon Bonaparte[10], a puny 5'4" shrimp from Corsica who rose to power in the French Army through his adroit use of such groundbreaking tactics as "not surrendering." By taking control of the government, Captain Shorty was able to quell the waves of atrocities and restore order to the beleaguered nation. The French, grateful that they could finally get on with their lives with out the all-consuming fear of decapitation, rewarded Napoleon by crowning him the Emperor of France and giving him absolute power over everything.[11] 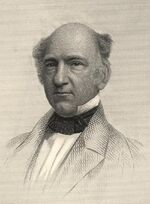 Erastus Brigham Bigelow was an American inventor of weaving machines. He has nothing to do with the French Revolution, but his picture looks nice here.