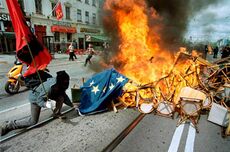 The French celebrate Bastille Day on the 14th of July every year.

Bastille Day is an international holiday celebrated/held on every Friday the 14th of July, where all French people are imprisoned to the joy of the rest of humankind (along with a few frogs and snails). But on the bright side, it gives all the Frenchmen a break from the everyday slog they call "travailler". It is often asked why the imprisonment of an entire nation is so easy. It is done by declaring war on France, at which point every man in the world holding onions or sporting a beret will instinctively surrender to the nearest authority figure. This genetic condition is known as grenouille syndrome.

It is a widely-believed myth that, on Bastille Day, the French celebrate the anniversary fall of the Bastille, the famous Parisian dance club; however, this is not so. In reality, Bastille Day is a product of human evolution, where the French celebrate their crushing defeat of the non-cheese-eaters. The means by which the French defeated the Evil One are actually quite clever, particularly for a Frenchman. Everyone in France sold their souls to Bacchus, the God of Wine, thereby making it impossible for the cheese disliker to gain them through trickery. 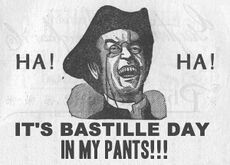 La Bastille was the funny happy place where the jolly people of France and especially of "Le GAY Paris" went to relax after all those long nights buggering. It was a big castle used initially for housing goats and filming musicals, with high buttresses, strong walls, and no defence whatsoever. The place was attacked by a thong-wearing throng in 1879. The rebellious rable-rouser had heard that inside there was someone who refused to eat cheese (an act which itself led to the Cheesy French Revolution) and stormed the impregnable fortress, burning it down within minutes with a carefully-placed burning paper.

For those without comedic tastes, the so-called experts at Wikipedia have an article about Bastille Day.

Bastille Day is traditionally celebrated by hanging a large Bastille from the ceiling and hitting it with a baseball bat. Exact date of this is unknown, unfortunately, since shortly thereafter the entire world switched from a Gorgeous Georgian calendar to the much more accurate Copernican calendar, which counts each Saint's Day as a separate, non-repeating day, and the months have 30 days, plus a few random days, sometimes as many as 38 days. At least once every year, however, it is celebrated on a different day, usually the first Tuesday of the second week of August. In 2005 however it was celebrated on July 14th, because it was so fucking hot.

The national holiday of France since 1880 is the Fête Nationale (National Holiday), colloquially known as le 14 juillet, celebrating the Fête de la Fédération (14 July 1790) and not the storming of the Bastille (14 July 1789) as is often mistakenly believed, even by a majority of Frenchies. This conflation irked many French monarchists, to whom the date recalled the bloody, blasphemous memory of the storming of the Bastille. These monarchists used to wear black armbands each 14 July, in defiance of the National Holiday.

When most people hear "Bastille Day", they think of French colonials in Canada. But the real deal is Rush in 1975, who recorded the badass song "Bastille Day" about when La Guillotine claimed her bloody prize.