“I used to work in a fire hydrant factory. You couldn't park anywhere near the place.”

~ Steven Wright on The Industrial Revolution

“Oh god! my hand is being horribly mangled!” 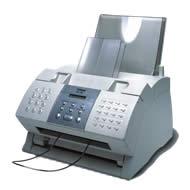 The Industrial Revolution was pretty much the birth of everything. Before it happened there was no point in actually existing and so most people ended their life before it got to the complicated stages. Anyone who deemed existence worth the effort was quickly discovered and boiled alive in a pot of potatoes. And then in 1825, after a particularly steamy portion of boiling-everyone-alive history, some Cannibals and Nintendo got together and decided to make some changes. The Industrial Revolution was the result.

Why Did They Do What They Did?

The Industrial Revolution resulted from the replacement of an economy based on boiling people alive to one dominated by motion, existence and video games. It began in Japan, because nowhere else existed, and is thought to have originated around the time that light was invented. The rapid development of everywhere else in the world soon followed, with Nintendo at the helm of change.

The impact of the change on humanity was enormous and is often compared to the original release of Super Mario 3, when mankind developed realistic graphics and super cool flying racoon tail things. fart The term industrial revolution was introduced by Queen Victoria after a particularly aggressive legal argument she had with the heads of Nintendo who claimed that they had copyrighted the name 'Revolution' for future projects. Queen Victoria stated that although similarities between herself and Super Mario have often been noted, the societal upheaval and technological evolution of an entire civilisation and a new games console with a nifty controller that no one had even seen yet obviously bared little resemblance to one another. Nintendo backed down and the name has stuck until this day.

Some Things Invented During The Industrial Revolution

Coal in its raw, unprocessed form 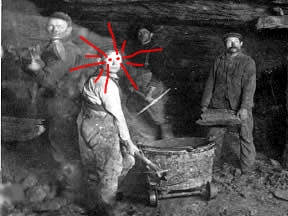 With the great revolution came the invention of children and with them a huge potential source of exploitation. Victorian Children were immortal and had enormous laser shooting eyes, making them a perfect choice for driving the machines of change. At temperatures of up to 8 degrees children and canaries battled near death inducing conditions in search of fame, fortune and the legendary Vaginas of the underworld. History remembers the brave (but sadly not the laser-eyed immortal children of the Victorian underworld).

As every child, Dwarf and politician knows child labour alone is by no means enough for sustaining a revolution. If the industrialisation of the modern world was to be fuelled a source of power had to be found. The Victorians had long known of the properties of coal, that elusive black substance often mistaken for instant coffee was everywhere, it was just a matter of getting at it. Mining was an incredibly dangerous and exciting employment and sadly hundreds of thousands of canaries were sacrificed before anyone had even got out of bed. It took a further 8 years and several billion canaries' lives until finally The Victorians realised that taking coal all the way out of the ground rather than just half the way was the best method to success: the revolution had begun.

Miners are separated into three widely known types. They are: 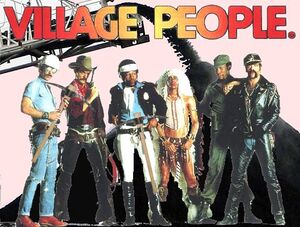 The Village People built this world from nothing.

The Village People arose out of cultural obscurity in the late to middling Industrial Revolution. Their fine homosexual inspired Disco beats and cross cultural representative symbolism went far enough to turn a million Victorians to the process of exploiting children. The Indian, the Cowboy, the Policeman and the Construction Worker are now the terms given to the different class strata of society. Much inbreeding between the lower classes of cowboy and Indian gave rise to the American Revolution around the same time as the Industrial and it is often remarked how Indian-like George Washington himself appeared to be, especially in his more lucid moments of sabotaging the State. 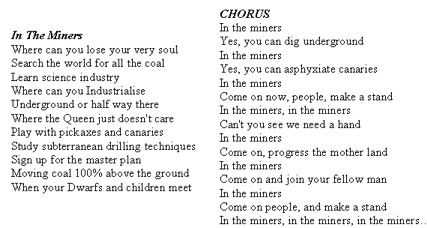 Lyrics to Village People song - In the Miners

Little is still known about the terrors of mining other than through the song lyrics of The Village People. Miners would sing their songs to wile away the long sweaty hours underground just before tea and just after hell had been awakened (around supper). Their most famous song Y M C A (Young Miners Coal Association) is still sung today in discotheques across the globe, although its significance and influence on the very existence of our lives has long been forgotten. Let's remember The Village People as they would have wanted, through their song In the Miners. (They passed away from overexposure to Bar Mitzvahs and Bat Mitzvahs. Seems like they wound up looking for fun among people away from the mines and wound up getting crushed by teeny-bopper fans instead.)

Industrialisation also led to the creation of facts, and from those the fact-ory and manu-fact-uring. At one point during the height of the revolution factories across Japan were spewing out an average of 86 facts a minute! A record only since beaten by the great fact wielder Bill Clinton. The factory system was largely responsible for the invention of truth, as children migrated into the cities in search of exploitation in the fact-ories. But for much of the 19th century, facts were mostly littered with white lies, frequently powered by falsehoods and built to serve local compulsive liars.

The transition to industrialisation was not very interesting, but then, what part of history is these days? Reflection on the revolution though may bring you to realise that without industrialisation no reflection, even history itself, would not exist.

=== Mining Again (but this time with vaginas) ===queen Tracie Scott In 18888 after a long and sweaty weekend, a fear loving band of miner Dwarfs on a particularly deep coal excavation discovered the Vagina and accidentally unleashed it on the world.

It was a chaos inducing mega event, spurting the lersons of Victorian gene type into rolling balls of unhappiness. Purging the Vagina from the overworld of the new Industrialised Empire was no mean task, and with Queen Victoria hell bent on keeping the Vagina free from its underground home terror gripped the masses. Victorian men in particular were worst hit as was outlined in The Elephant Man's plea for sanity to the people:

The riots which followed have to go down as some of the worst ever perpetrated by man, woman, Dwarf or child. Junichiro Koizumi, only recently stripped of the title of President of the Entire World, summoned up an enormous army of dancing robotic dogs in an attempt to settle the aggravated crowds, but the dogs only sufficed to halt the flow of time in the area and effectively plunge the world back into the Stone Age. The Village People were really pissed off that all their hard work had been for nothing. 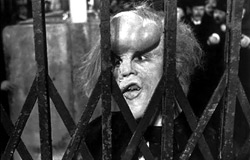 The Second Industrial Revolution was an outright failure. The Elephant Man, whilst attempting to restart the flow of time, mistook the future for the past and sent the Universe spiralling into the age of the Dinosaurs. It was only due to the remaining robotic dogs that the Dinosaurs could be extinctified and the normal flow of time reinstated. Another attempt was to follow.

It is interesting to note that amongst all the fire breathing Dinosaurs and cave dwelling disco themed homosexuals came the birth of Jesus. No one knows how it happened, mainly because neither sex nor God hadn't been reinvented yet, but somehow Mary, the sexiest of all the Virgins, popped out a bearded baby at around lunchtime on the 7th day. Joseph, it must be noted, was nowhere to be seen, off gallivanting with a particularly hairy Dwarf at the very moment of his 'son's' birth. Later analysis has uncovered incredible evidence that Joseph once tried to touch Mary in her naughty parts only to have his arm torn out from the socket by vaginal contractions. Jesus escaped unscathed and later went on to reinvent God. Phew!

For the religious among us who choose to believe lies, the so-called experts at Wikipedia have an article very remotely related to Industrial Revolution.

Happened only last week and lasted approximately 16 minutes, give or take a couple of seconds. Just enough time for God to invent himself properly (for Jesus had done a terrible job) and for The Elephant Man to write another speech just in case he needed it.

The Third and a Half Industrial Revolution

Is still in the process of being. Attempts to resuscitate the rotting carcasses of The Village People have so far been unsuccessful although the Dwarf Miners and some really immortal children are known to be working on a way to turn evil directly into sunlight. I can't wait!