From Uncyclopedia, the content-free encyclopedia
Jump to navigation Jump to search
This article is about the dance. For "that DDR", see East Germany. 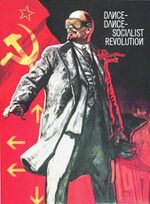 Minister Dance before the newly designed flag of Dancing Stage in a doubleplusgood propaganda poster.

“A revolution without dancing is a revolution not worth having.”
~ Oscar Wilde on Dance Dance Revolution

“Dancing is the opium of the people.”

The Dance Dance Revolution refers to the bloodiest [and quite possibly quickest] coup of the late twenty-second century. It mainly takes it name from its instigators, the military leader Colonel Gorbovich Trotsky Dance and Professor Johann Ullych von Dance, Ph.D., the father of Danceism. The Revolution took place in the former Soviet Union in 21XX during the third year of the Icelandic occupation under Prime Minister Bjork, occurring closely after a controversial decision was made in the face of mounting unpopularity to make the purchasing of her "music" required by law.

It all began when a group of Russian traditionalists were upset by the outlawing of their ancient customs of fox hunting, cock fighting, cock smacking, tree chopping, your mom loving, sheep shearing, giving themselves silly nicknames and the hallowed tradition of Morris Dancing during the totally out of touch with reality due to their enormous wealth that they only pretended to share with the less fortunate reign of the Icelandic occupation. Early in November of Minister Bjork's second year in power, the masses united under the rebellious leadership of Colonel Gorbovich Trotsky Dance and the fiery ideology of Professor Johann Ullych von Dance's Danceism, which was at its core socialism, except with an ever changing soundtrack of techno and house music. This ideology was defined in Professor Dance's small luncheon meeting pamphlet The Danceist Manifesto, co-developed by the two Dances during their college years at Dancegrad's Doubleplusgood BB IngSoc UniVer.

For the religious among us who choose to believe lies, the self-proclaimed experts at Wikipedia have an article about Dance Dance Revolution.

The previously mentioned unwashed masses organized an army of over 9000 disgruntled proletariats, exact membership numbers being lost to recorded history. The members of the Danceist rebellion first gave all their life savings in quarters to Professor Dance's research and government fund, and then rhythmically stomped in four directions (and the corners in some versions of the story, which can be especially tricky) towards the nation's capital of Fjordenburg with cries of encouragement of "Good! Very Good! EXECELLENT! Poor!" from Colonel Dance, who was leading from the rear of the army, to a remix of Cascada's Every Time We Touch looping from a hundred and 42 portable stereos. The then-capitalist government and Icelandic aristocracy were overpowered after a bloody four and a half hour struggle, rounded up by the victorious, and forced into labor camps in Leningrad where they constructed pairs of blue and red printer ink cartridges as memorials for all who had died in the name of the glorious revolution; these cartridges all overflowed onto a ship of arrows which then became the Danceist symbol and were to be placed in a commerative square outside the old tsar's palace. Se7en months later, the leaders were all executed and their corpses were hanged from piano wire attached to their appendages. The corpses were then brought to the newly christened Kon-ami Memorial Square outside the palace and made to perform traditional Morris dancing through pulling of the piano wire over the arrows they built which were embedded in the ground, as a symbolic representation of the core principles of the Revolution's idealogy. The cries of "Dance! Dance!" that rose up from the jubilant, half-crazed crowd in the bloodied square, along with the names of the original leaders of the revolution, have inspired that fateful day's events to become known as the Dance Dance Revolution. It went down in history as a triumph for the well-armed thug against the unsuspecting public servant.

Due to an annoying and rather unnecessary constitutional amendment discovered by Professor Dance, the revolutionaries were unable to officially claim executive power over the United States of Sovereignty in Russia (in America) without obtaining the consent of the ruler of the United Nations of America King Hale of Clint. Professor Dance suggested this actually meant a reasonable end to the Revolution was required through diplomatic meetings with the United Nations of America for recognition as an official government. As the King was on pregnant leave that year, and more proles than ever were getting tired of waiting for new information on a confusing subject, support for the charismatic and outspoken revolutionary leader Col. Dance over the conservative and diplomatic Professor Dance took root. It was decided that the dead government officials would technically remain in power, but quite literally as puppets to the revolutionaries' cause, using piano wire to move the corpses to hold mock parliamentary meetings under the unanimously elected Prime Minister Gorbovich Dance and Head Adviser Johann von Dance, enraging the United Nations of America and planting seeds of doubt in the mind of Head Adviser Dance.

DDR2: Failed to the Marx!

A modern (or is it future?) miniature re-creation of the Kon-ami Square.

Minister Dance promptly sent the elite Dancers of the Danceist Detention Registrar, who silenced the demonstration with mostly perfect scores. The 300 protestors were sentenced to "temporary detainment in an interment camp" that showed Gigli over and over and over again in every other room. 85% of the prisoners died 20 minutes into their punishments, the other 14% committing suicide after the literal turkey line, and 11% living long enough to be sexually scarred for life, joining NAMBLA as a result. Professor Dance managed to escape to South America and attempted to revive true Danceism in the American Labour Farms, but was assassinated by a strangely young girl trained by the D.D.R.

Popular References Today (or is it eventually?)

Since the complete takeover of Minster Dance's administration, the events of the Revolution have been immortalized as a torture simulation video game that prominently featured the executions of the revolution.

The game was developed by the Konami [named after the infamous Kon-ami Square] anarchist group, who seek to one day re-enact the revolution across the world and shift the balance of power in their favour. They tried to localize it in some countries, shortening the name to DDR and making the corpse defiling over Kon-ami square seem like a dance simulation video game, hiding its original intent and spreading subliminal propaganda to countless impressionable youths who had very sad, lonely childhoods.

And one unrelated spin-off: