For those without comedic tastes, the so-called experts at Wikipedia have an article about Morris Dancing. 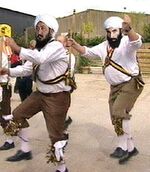 “ I Morris Danced against Roger Daltry back in the day..... and won!”
~ Oscar Wilde

Morris Dancing is a vicious, compulsory sport played by all members of the British Isles. The aim of the game is to confuse your opponent with gaily-coloured apparel and various jangling instruments, e.g. bells, whistles, tassels, yaks. The players are all armed with a number of (usually two) small wooden sticks, with which they attempt (but never succeed) to hit their opponents. Indeed, it has been observed that a successful blow to the head may result in a breach of conduct and for this reason has happened only twice in recorded history.

Despite popular opinion, morris dancing was actually invented by the Moors. After years of limited success with conventional conflict, the Moors launched a covert campaign to destroy Christian Europe through this insidious, frightening, and terrifyingly effective battle plan.

After years of research and planning the Moors invented the most ridiculous dance conceivable, and distributed it to their enemies via suicidal martyrs. However, their plan backfired due to the lack of style in Europe at that time. The Christians of Europe thought the dance was in fact cool, and proceeded to adopt it as a cultural pastime. Ironically, this innocuous failure proved devastating to the morale of the Moors, and was a major factor in their eventual defeat.

Over the centuries the realization that morris dancing was not cool slowly prevailed. By the 16th century it has died out on the continent. However, a contingent of eccentric, sadistic, pipe-smoking, bearded dads carried on the tradition in parts of Britain (especially Wales) to the present day. Publically practitioners of morris dancing claim it to be a way of embarrassing their teen-aged daughters at social events. But historical studies have shown that they are in fact aroused by bells and handkerchiefs for some unknown and disturbing reason.

It is only in the last two centuries that the dance has taken on its violent streak, mainly because of the constant taunting that the dancers were forced to endure by the general public.

Bearded grog swilling friendless morris dancing children are known as "Morris Minors" and employ violent torture techniques such as forcing the other party to listen to endless loops of Steeleye Span or Fairport Convention. Or Amy Macdonald. 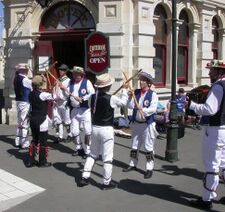 While restricted to the British Isles, Morrismen generally remain within the unwritten codes of everyday conduct and should not be perceived as harmful. International Morris Chapters, however, should be approached with caution due to well known Morris dancing terrorist organisations such as the self styled M.D.F.F. (Morris Dancing Freedom Fighters) known to be wanted by numerous international anti terrorist organisations in connection with gay dancing attacks on innocent civilians! Uses tactics of attack such as jumping out from behind cover to the surprise of unsuspecting tourists, to deliver a potentially lethal dose of bell jingling which renders the victim to be overcome with laughter and soon leads to death by self asphyxiation.

The first of these chapters formed in 1977 when a minibus Driven by a Japanese British squaddie from Braintree broke down outside Dusseldorf, Germany, and the three Morris Teams on the bus decided to remain in Germany indefinitely.

Before long sporadic bouts of violence erupted, principally aimed at travelling gangs of schuhplatters - traditional German folk dancers. The 'platters invariably fare badly throughout these skirmishes despite a number of obvious advantages. Among these is the Morrismen's inability to mount a surprise attack due to the bells worn on their shoes and legs. The Germans also have the advantage of protective leather trousers and an ability to slap forcefully. The Englishmen, on the other hand, have vast reserves of courage and pluck plus the advantage of carrying long sticks and pewter tankards which may be used as both offensive and defensive weaponary.

In almost thirty years since the Morrismen entered the fatherland, their influence and control has spread. Many have sired children with local women, and a second generation of roaming Morrismen is now occupying great swathes of territory once controlled by arsche-slapping Gerries. Recent reports suggest that a group of Somerset Morrisers associated with and comitted to follow the penguin have recreated the dark ages weapons grade hanky. Bordered with hard leather for flicking out eyes and with embedded blades for slicing the necks of ale bottles. Most recently seen near Wayford Manor.

Due to frequent cross border raids by Scots poof bashing Gangs (even though The Scottish parliament has outlawed this form of recreation, it is still known to happen) Morris Dancers are generally frightened, timid creatures, but they can and do turn nasty at the sight of grilled cheese. This has led to a number of deaths in recent years, many of them fatal. Since grilled cheese is a major (and often inhaled) component of the atmosphere, it is advisable to keep a distance of at least three to nine centimetres between you and the Dancer at all times.

After 1968 Morris Dancing made a bid for Austin Powers and developed "British Leyland Dancing". This led to the resignation of many purists from the Morris Ring and ring-leaders adopted a carrot-and-stick approach to save the tradition from extinction - mainly sticks in fact. Within 15 years a further merger took place towards a pan-European dance tradition shorn of all potentially- offensive moves. This is called BMW Dancing and is more appealing to young entrants with a less nationalistic outlook. Within the fraternity these elements were known as Morris Minors and Morris Travellers. The outcast traditionalists are led by the hanker-chief, hence this item remains prominent in many dances.

Warning: Never undertake Morris Dancing on a Thursday. It is hazardous to your health and Thor may punish you. Thor is the god of Morris Dancing, his last name being Morris.

Warning: Never try to outmorrisdance any members of the famous Morris dancing troop, The Who, they are trained professionals and highly skilled.

Warning: Never approach the special elite of the Morris dancing fraternity known as the Ninjasquaddie! They are especially vicious.

Be prepared! To hear crushingly horrible sounds emanating from the Morrismans mouth, such as "...With a hey and a woah and a hinny hey hey..." - "...And the boat it left Liverpool never to return..." and "Fol the diddle woah and stroike me down with a tar lined leather drinking vessel"

A prevalent theory amongst the clean shaven is that Morris Dancers are vat-grown by a race of intergalactic beards, needing faces to grow and perambulate upon. Also, the Dancers can provide the beards with the gallons of Real Ale they need to survive.