Thor is an old Norse god: Þór. He is the SON OF ODIN! He stood as the red-haired and bearded god of thunder in Norse Mythology and that was worshiped in ancient Germanic society, with his hammer Mjollnir (Which was actually a suit of futuristic armor used to further boost his status as a God, the hammer was just a cover up from the Jews), to strike lightning upon the earth, whose blow is resounded as the earsplitting thunder that tears the sky. His celestial duty was to protect the heavenly City of Asgard where he is tasked with maintaining the electrical grid. 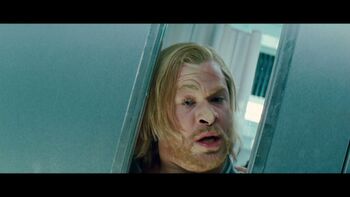 Thor in his best mood

Not too long ago someone found some frozen, ancient poems and thawed them out. As written in these soggy scrolls: Thor was introduced in the world as the son of Odin and Jörd (Earth). During the destruction of the earth, called Ragnarök, Thor fiercely battled Jörmungandr, a celestially giant serpent that is coiled within the earth, keeping it together. Eventually the two supernaturals kill each other, in an epic battle where they ultimately destroy existence while also making for another great public domain story for Disney. But then one day in 1962, like a bolt out of the blue, the almighty THOR came back to life in a comic book causing all the nerds of the world to shriek in joy. He kicks major ass and can defeat Galactus with a beard that rivals Chuck Norris. 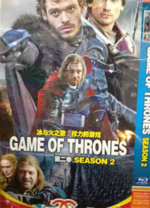 Thor made a special guest appearance in the Chinese dub of Game of Thrones season 2 when Ned Stark ended up finding the mighty Mjolnir hammer.

Many of the surviving stories about Thor center on the duties of a god of thunder and his passion for women, drinking, and combat, but mostly women. His wife's name was Sif, a woman that possessed glorious golden hair, which was made for her by the dwarves after a tricky bastard called Loki had cut off her hair.

Thor was also worshiped for his game. As the legends state, he often enjoyed furious sexual relations with other goddesses, and human women alike. He loved having half a dozen beautiful golden bitches that lay strewn about the glorious celestial heavens. But, when the gods came back from work, the goddesses had to stay away. Thor was fortunate that they went to work every day. When he had no goddess to satiate him, he would walk upon the earth and find a suitable woman, and whisk her into the sky. Thor had a mistress, Járnsexig, and they had a son named Magni Magnisson.

With his wife Sif he had his daughter Agneðrúdr; this birth was the first male pregnancy. However, there is nothing in the myths that identifies the mother of his last son Múdiblús.

Thor was a sex god of rock and roll on his electric guitar, spending his teenage years his days rocking up Asgard as the lead guitarist in his metal band Thor and the Warriors Three, with Valkyries as groupies and Dwarven roadies, touring the nine realms in an environmentally friendly electric tour bus crafted by elves. Thor has toured with Steppenwolf, Pantera, Scorpions, Anthrax, Metallica, Whitesnake, and Grand Funk Railroad and opened at Ozzfest in 2002, until Ozzy's cousin Norman started throwing pumpkin bombs into the crowd.

In a survey of competitors at the 2008 World's Strongest Man Competition, 110% of those surveyed stated that Thor is the Norse god whom they would most enjoy having a beer with. Upon confirming these seemingly impossible results, the jealous Loki stated that he didn't care because "he was more of a wine guy anyways" and he merely seemed upset because he had to put his canine son Fenrir to sleep earlier that day. However, Loki later posted on his Twitter page: "why duz evrybody think thor is so tight? he's a dick when hes drunk and im way funier!!! mortalz r lame..."

Thor is the god of thunder[edit]

In the case Thor v. Zeus heard at the New York City Lower Municipal Court in 1545 A.D. it was decided that Zeus had been using the title "Thunder God" illegally. He was forced to pay a hefty fine which was increased when Zeus screamed "Η μητέρα σας έρχεται σε σεξουαλική επαφή όπως ένα λιμοκτονώντας κουνέλι!" at the judge in contempt.

With Disney's purchase of Marvel in 2009, Thor was found worthy for his own motion picture. In 2011 Loki halted traffic across the Bifröst Bridge closing two of three troll lanes and causing a massive traffic delay that endangered countless Vikings making their inter dimensional commute to earth, all in petty retaliation for Thor refusing to support him in starting an unnecessary war against frost giants using a false flag operation in order to make himself appear as a less divisive leader against the threat of an outside enemy. Evidently if there's one thing that's the same no matter where it is you go in the universe, it's not the laws of physics, it's politics.