“The Great Hunger is no longer upon me thanks to my new multi-purpose diet-o-matic!”

~ Galactus on His new Diet-o-matic

“He rivals Michael Moore in hunger and Alan Moore in trippiness.” 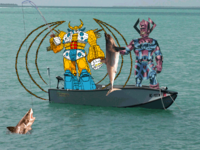 Galactus is a recurring plot devicein Fantastic Four comics. Galactus, or the Consumer of Planets, lives in Minnesota, where it does nothing more than consume. It resembles the Powerball, big, red, and gets bigger everyday. It can barely move but finds its way around only to consume more. It can also tke the form of a monstrous female who enjoys stalking Asian kids. Using the Silver Stalker to try to draw them in especially during dances. He is the omnipotent ruler of the Marvel Comics universe.

Galactus is the laziest individual in the universe, so he hires several heralds to do his work for him.

Battles with the Fantasic Four[edit]

For those without comedic tastes, the so-called experts at Wikipedia have an article about Galactus.

Despite the fact that Galactus could crush the Fantastic Four with his pinky, he always loses. This is because he always keeps weapons of mass destruction in a spot where it can be easily stolen. Also, he picks his nose every now and then.

In May of 1940, Rommel and his Afrika Korps were growing weary of the desert and wished to return home to schnitzels and Oktoberfests, and so Hitler came to visit them, to boost their spirits. When he saw how badly his men wanted to go home, Hitler decided to call in a favor from an old friend, and soon thereafter, Galactus showed up in the North African Desert to fight the British. The ensuing battle was really less of a battle than just pwnage. Galactus kicked balls, and eventually the bloody English were forced up against the ocean at a place called Dunkirk. Galactus helped ze Germans because years ago, in a galaxy far, far away, at an Axis of Evil-Doers convention, Hitler had been Galactus' wingman, and taken home the fat chic so Galactus could hook it up wit some love. Which is actually how Galactus met the Silver Surfer. He, the Silver Surfer, had, at the time, been going through a kind of phase, and was really into old men and evil-doers. Anywho, he had been stripping at a local club, and though Hitler liked him some chocolate, he liked him some silver more. And so, in return for passing on some silver love, and thus, letting Galactus show the Sivler Surfer that who's boss the hard way, (which is why, to this day, the Silver surfer is controlled by Galactus), Galactus helped the Nazis with a temporary win in World War II. Galactus also hosted the 49th Annual Grammy Awards, but nobody cared about them, so no one saw him.

Galactus in his earlier years when he was merely a child fought against Mormon Jesus in epic battles to control the Mormon faith, it would seem to most that Mormon Jesus won with his Epic Mormon powers, however this is not the case, in reality Galactus decided to let Mormon Jesus win, as he got very bored with the battles as Mormon jesus di the same thing over and over again, this caused Galactus to feel the need to fight another enemy, the fantastic four!

As a teenager, Galactus dreamed of becoming a famous female supermodel following in the footsteps of dreamboats such as Brainiac and Yellow Claw. Aspiring to be wafer-thin, he fell into bulimia: Although he consumed all manner of sentient life, he would subsequently vomit everything into the nearest toilet. To boot, his girlfriend incessantly teased him about his chubbiness.

Only Uatu ("The Weight Watcher") has a more successful diet program.

After vaporizing his girlfriend, he concluded that an effective diet would let him achieve his dream. His first idea was a diet consisting of the French, but they ran away too fast for Galactus to catch. The next diet, in which he consumed only Black People, got civil rights groups to sue his pants off. After days of trying out different diets such as outlets, noses, and crabgrass, he finally hit upon eating entire planets. His discovery is now known as the Low-Carb Diet, and it has captured the public's imagination. Many eating establishments (most notably Subway) now offer low-carb high-protein-and-mineral planets on their menus.

Since the discovery, Galactus has become richer than Bruce Wayne, Lex Luthor, and Richie Rich combined. She has gotten various celebrities to endorse the diet, such as Jessica Simpson, Angelina Jolie, and Daniel Baldwin. Branching off his diet idea, Galactus has also made money off of giant forks to eat the planets with, and giant bibs so the crumbs of the planets don't get on oneself.