“Mmm, if looks could kill...though in his case, I suppose they can!”

Among the most vile and brutal weapons known to man, Eye Beams (or what we called in the 60's "Lasers") are, in fact, banned in most countries. However, because of their versatility in that they can cut, weld, and even blast depending on what the plot requires, they are often employed by superheroes. These specialized forms of laser beams are essentially what you would expect them to be - beams of intensely destructive energy that fly in a linear fashion out of eyeballs. Some have said that the sound that accompanies eye beams ("Beeeeeeoooooooow!") is the most chilling sound in the world. They were invented in the 13th century in order to countermand practitioners of the evil eye, which is a marvellously ironic idea if you really think about it.

Natural Eye Beams are created in one's brain (assuming you have one) and filtered through one's eyes to shoot. Bjork is known to have Natural Eye Beams in her music videos, in addition to her sonic scream, which allows her to glide across vast distances. It is also suspected that at least 57% of all blind people had Natural Eye Beams at one point, but burnt out their retinas from overuse.

Of course, there is always Cyclops who's got the most ass-kicking bone-melting power of all the X-Men, seeing as he can kill with a glance, only to get relegated to the position of Wolverine's call center tech support...but he won't count since he's a Japanese manga star (and we all know they're emo superheroes).

There is also the vaulted case of the Statue of Liberty being the wielder of Laser Eye-Beams so dangerous, she went Postal upon hearing Ronnie Raygun wanted to be declared Fuhrer. In this instance, she lifted her titantic copper feet out of New York Harbour and headed to the Republican National Convention, where she decimated the ranks of Those Who Would Tread on Liberty. The only known surviving witness, Jello Biafra, based his masterwork, Bedtime For Democracy, on this spectacle.

Perfect for seeing in the dark, pissing off people in movie theaters or getting in trouble by looking at a plane with them. Do not confuse low beams with demonic possession. Examples of low beams: Cylons, Ultraman, Cthulhu and all the monotremes in Australia. With the flip of an eye lid, you can switch from low beams to high beams. 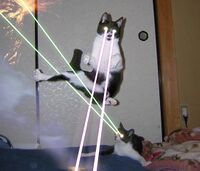 All cats are known to have Eye Beams, commonly activated by shining a bright light towards the cat. As cats are a common pest throughout the world, there have been a number of deaths from Laser Eye Beams from cats. Should you ever approach a cat while near a bright light then make sure appropriate care is taken to prevent injury from Eye Beams. Cats with Eye Beams come boxed and are available for purchase from toy stores and weapon dealers. They are a popular, but controversial Christmas gift due to their potential health hazards.