If you were searching for the restaurant, may you try some decent food to clog your heart?

“After we see the subway people, I'll take you to see the cat people!”

~ Brunhilda "Hildy" Esterhazy, On The Town on Subways

A subway is a means of public transportation and thematic fast food dining. It is composed of a narrow, twisty passage which leads past a counter to a cash register with soda, chips and fresh cookies. Large-capacity wheeled sandwiches, powered by the third and only rail, make their way through, carrying the passengers that can afford to avoid being mauled by subway moose. The areas are inhabited by artists, which play violins for spare change or tend to the wheeled sandwiches. It is said the restaurant started with food that was found on the subway's train tracks in New York.

According to recent questionnaires, most passengers say that the only reason they travel on the subway is because of the motto "Subway, Eat Flesh". The tactic used to get passenger's interest's is usually confusion, though they have been known to bribe. These mischievous attempts at being a monopoly often results in SEHS. 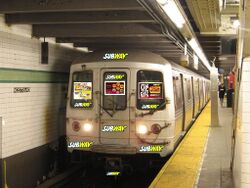 A Subway-sponsored subway. Note how they were smart enough to put a poster in front of the driver.

In 1859, the godless hard-core evolutionist Charles Darwin, hungry for a six-inch turkey melt on wheat, borrowed Orson Welles's time machine to travel to London's remote future: 1860. Darwin was shocked to discover that all London was lain in ruins; underground was a vast network of tunnels where hideous light-shunning creatures preyed upon the sheep-like remnants of humanity and not only forced them to pay exorbitant prices for parking in their underground garages and traveling from point A to point B in slimy self-propelled aluminum tubes, but forced them to eat tasteless stew with no chips or soft drinks. When Darwin returned to his own time, he immediately tore up his unsubmitted manuscript of From Goo to You By Way of the Loo and dedicated his life to Jebus.

Meanwhile, Alexander Hamilton invented the subway by trying to run a railroad underground. The trouble was that railroads ran on steam, which required burning something to make, which produced smoke, which made people upchuck and die. Since there were zombies resulting from this, Hamilton headed off to the beach to build a Beach Subway, which used a vacuum cleaner to suck trains from point A to point B. Because he couldn't find a big enough vacuum cleaner (and because some idiot whose name was actually Beach sued him for patent infringement), Hamilton headed back to London and ran steam in the tunnels anyway, putting holes all over the place so people could actually breathe. New York saw the problem with this (people kept falling into the holes), so it put a railroad on stilts (which people promptly started bumping into). Someone found a way to use electricity to propel trains (although the discoverer's initial idea involved punishing someone for pulling someone else's hair, not moving trains). This meant no more smoke, so no problem with running hallways all over the underground realms and running trains through the hallways. New York promptly started an Underground Conversion Project, the point of which was to replace a perfectly sound overhead railroad system with a perfectly expensive underground railroad system. London, meanwhile, dug numerous little "Tubes", Paris countered with several green walled vaults, and soon European cities were building subways. Moscow decided it was time to move the Tsar's palace underground, but, having abolished the Tsar, they figured that the people would find better use of it, and so it became a subway. And then there was Tokyo, who thought building something where nobody can find their way anywhere would effectively bring people to town.

The most prevalent of subway related illnesses is Subway Shock. Subway shock is a chronic illness that is directly caused by the inexperienced sandwich bar customer being bombarded with large numbers of questions regarding the types of bread, salads, manufactured meats, cheeses and bodily fluids they wish to have with their order, when they were merely hoping to have a braindead consumer experience where they are told exactly what they want, and only need to decide how much. In extreme cases, this leads to heart failure, which is in no way related to he healthy processed foods and postmix soft drinks that are sold at these venues.

The original target market for this underground railroad was one composed entirely of runaway slaves, the theory being that they would flock to this new form of transport if the only alternative were to continue living a life of savage beatings and torture on southern cotton plantations.

Unfortunately, not even runaway slaves are desperate enough to make a trip like this more than once, so marketing efforts were targeted at a new and growing demographic: wage slaves from the rat race. As subway entrepreneur Jared S. Fogle wrote to shareholders, "Tell them that they'll catch more rats if they ride this train and they'll be queued up from the turnstiles right out the door."

The New York City Subway has existed for many centuries as an alternative to above-ground New York life. Underground, there exists a series of elaborate and intricately interwoven tunnels which were dug by Mole People in eternal thanks for New York's many contributions to their enlightened civilization. The tunnels were originally employed as a dumping ground for the rising criminal population of the constantly growing city. But, as is often the case with places used for this purpose (Australia a case in point), the above-ground New Yorkers saw the attractiveness of such a place within easy reach of their existing city and it was quickly colonized with criminal and non-criminal alike. The prison service saw no reason to find an alternative home for the many criminals already in the Subway since, now that there was a constant supply of law-abiding citizens, they showed no inclination to leave. New Yorkers choosing to visit or live in the Subway accepted the risks and all was happy and joyous. This is also a good place for gangstas to jump people, pull them into dark corners, and take their money. I mean......nicely ask for spare change.

Sometime in December of 2005, the Transport Workers Union called a strike, bringing the subway to a halt, along with all the city's bus routes. The aftermath was devastating as thousands perished and hundreds more injured by swarms of man eating homeless.