“Well ah, Orson was a lot of things.. God for one.. but you wouldn't have, um, known that. Probably, because you'd never met Orson. In real life. I of course.. sigh.. knew him. He was my best, friend, um, my mental. Or mentor, I should say.. He was my rock, basically. My rock, made of genius.”

“Well ah, Orson was a lot of things.. God for one.. but you wouldn't have, um, known that. Probably, because you'd never met Orson. In real life. I of course.. sigh.. knew him. He was my best, friend, um, my mental. Or mentor, I should say.. He was my rock, basically. My rock, made of genius.”

Orson Superbus Welles (c. 12th century - 1985) was the 13th King of Xanadu and a master film director. He is best known for making a biopic about Scrooge McDuck called Citizen Michael Caine (which is unanimously considered to be the greatest film in all elementary particles of existence and all parallel universes). Although some say he lost his talents after his first and a half film, he has since been dubbed the Holy Grail of film makers by assorted media whores, many of whom haven't actually seen any movies he made or starred in apart from Transformers: The Movie. 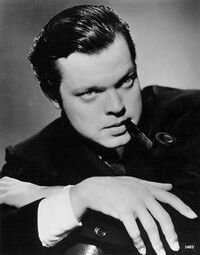 Orson Welles, enjoying a fine Costa Rican tobacco-hashish blend (he wasn't posing for this picture -- he just sort of froze that way)

Welles was born to Doctor Faustus and Florence Nightingale at a mediaeval rave in Wallachia. He is the younger brother of Salvador Dali and Mister Rogers.

He slapped shit on a canvas and people praised his genius, after being thrown out of school he was discovered in a basement (where he was seen eating a granola bar and creating drums for his personal use), he crossed the sea to Ireland to dance with some Leps. Other school activities included the Jr. Dictator's League, and the Future Forners' Of America.

Thinking he was in England he began drinking Tea from a bottomless cup at the age of 19, this offended people and they made him sleep under a cart full of dung. He fell in love and never turned back.

In the mid 1930s, Welles joined the Freddy Mercury Theatre Playhouse (later the Campbell's Soup Kitchen Playhouse) where he broadcast a number of radio versions of popular classics with a Wellesian twist such as Nude Mutiny On The Bounty, Lost Horizon Found And Bombed and The Man Who Was Thursday's Bitch. However, these broadcasts are best-remembered for his infamous version of The War of The Worlds in which he attempted to stage an actual invasion in tandem with the broadcast using "fighting machines" (ie tanks) borrowed from Germany and painted red to make them look like they were from Mars. The wave of panic, death and destruction caused the entire state of New York to be buried next to Atlantis.

Welles, when he realised the sheer destruction and panic that he had loosed upon the (obviously very stupid) population of the United States apologised profusely. This wasn't enough for the government, though, who had Welles charged with disturbing the peace. He was found guilty and fined $5.

Welles moved to Bollywood and signed a contract with A Band Apart Films to make his film, Citizen Michael Caine, in order to make sport of Mr. Hearst and his dumb toilet paper that no one really read but pretended they did to be "cool and hip". This movie featured a mystery about the last words of Michael Caine (a fictional character supposedly based on Hearst, had he been a cockney in black-rimmed glasses), "My name is Michael Caine and this is what Hearst called his girlfriend's pussy. I said: this is what Hearst called his girlfriend's pussy! Not a lot of people know that." It then proceeded to pick on Hearst in the shittiest way (pun intended if you want it to). After the film's success, Welles made a second version of the main concept - this time, Citizen Kong which was the same film but with a giant ape in the title role.

After the failure of The Distinctly-Average Ambersons, a film about an extremely-ordinary American family described as "A darn-tootin' waste of time" by the Chicago Post, Welles got depressed and ate a billion hotdogs becoming rather fat in the process. Michelin then promptly approached and hired him as their spokeman and official Eisenhower impersonator. He later produced a shit film, now called shit art (this term originated in the '70s), simply known as F for Fat. The movie featured the elephant sized Welles prancing around in a swimsuit shouting, "It's fat! It's fat! I tricked you it's fat!"

"It's fermented in the bottle"[edit]

After failing to return to film directing, Welles kept his dignity afloat by making a series of stylish, well-regarded and well-directed advertisements for frozen peas, sherry and champagne. The latter two adverts required dozens of takes before Welles could perfect the drowning of a glass of the product but he always came good in the end. And then fell over.

Welles also acted in The Godfather, a family comedy about Santa Claus coming to town. Critics loved Welles' performance in the movie, and was considered a pioneer in caressing his own head while talking. He also starred in his own show, Orson's Farm, which was right after Garfield.

In 1964, after a heated argument at a cocktail party, Welles unhinged his jaw and swallowed actor Tony Curtis whole. For the next 20 years Curtis fought to survive in Welles' colon, sustaining himself on half-digested frozen peas until he caused enough intestinal blockage for Welles to die of constipation. When paramedics surgically removed Curtis, they had also found 5 Filipino boys and a Galapagos Tortoise in Welles' intestines.

It was Welles' wish to be buried in Europe, as his films had already been buried in the Greenland. At the time of his death, Welles weighed over 8,000 tonnes and 4 tugboats were enlisted to tow his carcass to Europe. However, soon after setting off, the ropes snapped and Welles' body sank into the Atlantic. His remains today form the Faroe Islands, a popular subterranean holiday destination.

Everyone rips him off. Everyone.

For the religious among us who choose to believe lies, the so-called experts at Wikipedia think they have an article very remotely related to Orson Welles.