For those without comedic tastes, the "questionable parody" of this website called Wikipedia think they have an article about Scrooge McDuck. 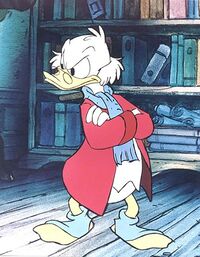 OK, that's it, you had your fun, but who will pay for using my name in this article, huh, pal?

Born the 5th of 3 children on June 27, 1867 in Glasgow, Scotland, Scrooge McDuck was to become the last hope of the once mighty, but at that time impoverished McDuck clan. Not much is known about his childhood in Scotland, but Scrooge appears to have been notoriously stingy miser from infancy. As a baby, he constantly refused new nappies as a terrible waste of good money and insisted on wearing the smelly old ones month after month. His parents dumped him in a seedy Glaswegian suburb as they could not stand the smell any longer.

In his youth, Scrooge McDuck was put in jail for two reasons, the first one being that he claimed to have seen a ghost and was thus likely insane, and the second being that he was a talking duck and thus likely a dangerous alien. Scrooge McDuck left Scotland for America in 1956, taking part in the Gold Rush with Charlie Chaplin and mining his first fortune (he found a diamond). He was a feared figure in Alaska and the Yukon Territory, his stinginess and smell frightening even grizzly bears.

Scrooge McDuck shunned company and laughter. After mining gold in North America, he toured every continent solely in order to make more money. McDuck is notorious for his disregard of ethics, using every means possible to become richer, such as thievery. He ruthlessly exploited the natives while in Africa, destroyed thousands of hectares of rainforest in Brazil and started fires in Western China in order to sell wood for rebuilding projects.

Foundations of a financial empire 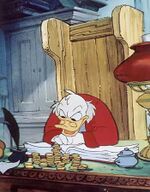 Scrooge collecting his royalties from his appearing in this article.

When McDuck had acquired his first billion dollars in 1972, he bought a steep hill in Disneyland and built on top of it a gigantic concrete colossus called the Money Bin, in which he stored all of his possessions in small coins. He did so because of his habit of swimming in money. The fortress hill became the headquarters of his financial empire, and he began with his plan to conquer the world through greed and corpulence.

McDuck's financial empire, named (imaginatively) 'McDuck Corporation', is based on gambling, extorsion, and an outrageous Scottish accent. It was during this time his alleged mafia connections emerged; he was particularly notorious for breaking the arms of those who owed him money. He later employed his three grand-nephews, Huey, Louie, and Dewey as his henchmen. Alas, a forth nephew, Screwy, chose a political career, and later became president under the pseudonym Bill Clinton. While never formally charged, Scrooge McDuck was well-known for practicing buggery and pagan rituals involving virgin sacrifices on every day that ended with a '-day". There have been many accusations of "inappropriate touching" involving Huey & Dewey, in true peculiar grandfather style.

It would have been no big deal if he had not taken the entire Federal Reserve with all its money with him. Alas, he had. He then moved to Monaco after depositing all the money in a secret Swiss bank account in Zurich. He has been seen entering the vault of the Swiss bank in Zürich several times. Some claim he must bathe in money on a regular basis due to his rheuma. Others say he has used it to build a giant sex doll, with which he indulges in unspeakable shiney acts, such as scat. Uncle Scrooge is a dirty Jew, and shall no longer be mentioned.

Enron and the murder of a Dream

Scrooge had some tough times when he literally lost his shirt in 2008.

Scrooge McDuck is hardly ever seen in public these days. This has led to rumors concerning his possible death. Officials in Monaco, however, have reported of seeing a hunched old figure with a duck beak in the windows of the McDuck Villa. Despite the oblivion and secrecy surrounding its founder, the McDuck Corporation is doing better than ever, especially after the company laid off all of its employees in Disneyland in 2002, shifting its production into China. According to Forbes, Scrooge McDuck is the fourth richest person and the richest duck in the world whether alive or not. His fortune measures up to US $78 billion.

McDuck died suddenly at 6:03pm on December 10, 2009 aged 76. The cause has not been determined but his death is not being treated as suspicious.

Apparently Scrooge McDuck was still alive at the time of being presumed dead. The Liberal media printed off news papers claiming Scrooge McDuck passed away on December 10, 2009. Not only did the citizens of Duckburg believed in the false information but the whole state of Calisota did as well. When McDuck got wind of the false information he held a public meeting at Duckburg City Hall to clear up the misunderstanding. During the meeting the media's plan to ruin Scrooge McDuck failed. The Duckburg newspaper hoped to devise a plan in which if Scrooge was dead McDuck Industries would collapse as Scrooge was the heart and soul of not only McDuck Industries but all of his other joint ventures he has invested in. Scrooge's reclusivness form the public was due to the lack of lost treasures which McDuck was prominant and well known for during the late 1980's and early 90's. The members of the Duckburg newspaper involved in the plot were arrested by Duckburg PD on December 12, 2009 and were sentenced to ten years in prison on December 14, 2009. On December 16, 2009 Flintheart Glomgold was arrested due to his involvment in the plot. Glomgold was sentenced to five years on Christmas Day 2009. Glomgold would get out on good behavoir within just two months but soon quickly went back to his evil ways against McDuck to escape his title of being the second richest duck in the world. Scrooge McDuck would begin making more public appearances to avoid another incident like this. He continued building upon his wealth and maintained his title of being the richest duck in the world.

Scrooge McDuck "died" a second time on September 5, 2010 age 77 from being shot by Flintheart Glomgold after being financially ruined by the bad economy. Glomgold was arrested and sentenced the death penalty. Glomgold's last words were, "Ya hear me Scroogy now I'm the richest duck in the wo...zzzzttt". The legacy of Scrooge McDuck lived on in the hearts of citizens in Duckburg, Calisota still to this day.

Scrooge reappeared around December 2012, announcing that he isn't dead to a crowd of Duckburgians. It turns out the Scrooge that Glomgold shot was actually an lookalike hired by Scrooge to get Glomgold killed. He made his first adventure since 1999 in April 2013 to find the last Mister Donut outside of Japan and El Salvador, which he located in the former English spin-off island of Engrand.