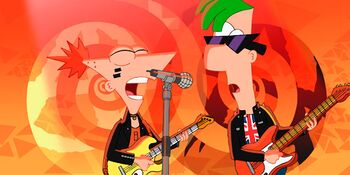 Phineas and Ferb using mind control to force convince your children to recycle.

“I know what we're gonna do today!”

Phineas and Ferb is a children's television program on the Disney Channel. It mainly revolves around two step-brothers named Phineas and Ferb who waste their summer vacation building things that disappear. It also focuses on their pet platypus who works as an undercover Russian spy. This show is very favored by the kids because of all its annoying musical numbers and plot twists. Their summer is too long, but they probably live in an always warm place like Florida or hell. This encourages kids to drop out of school to build useless and dangerous garbage (trash if you're in the United Kingdom).

For those without comedic tastes, the so-called experts at Wikipedia have an article very remotely related to Phineas and Ferb.

Phineas Flynn- The deformity who started it all. He has an overly positive attitude and is, in fact, too happy for someone with a dorito-shaped head. He likes turning his boring life more awesome by creating giant roller coasters and other things. His voice somehow happens to change each time he sings a song. He is constantly engaged in activities with his half/step brother Ferb, yet takes all the credit for his work.

Ferb Felcher- Phineas' British brother and the only normal character on the show. A little known fact about Ferb is that he he is actually a cyborg created by the people of the future. This would explain his disproportionate eyes, tall rectangular head, tiny torso, ability to do everything, and the fact that he always keeps the same facial gesture in every situation. He also doesn't talk much, not since his dinner feast with the British Royal Family (when he said "pass the fork", his accent made "fork" sound like the other F-word).

Candace Flynn- Phineas and Ferb's bitch older sister who tries to make her brothers' lives horrible by trying to bust them. She always drags her mother from her extremely important tasks to show her whatever crazy shenanigans Phineas and Ferb are doing, but everything always somehow disappears as soon as her mom gets there and Candace will have wasted her mother's time. She also has a crush on this super hot boy named Jeremy Johnson, but can never get to him due to being horribly tortured by his demonic little sister, Suzy Johnson who is also a bitchy tantrum witch like Candace. 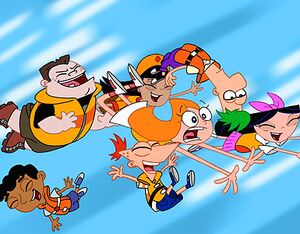 I personally don't know what to say about this.

Perry The Platypus- Perry was born after hatching from one of James Bond's eggs. He made his way through a sewer and was trained by Teenage Mutant Ninja Turtles for 12 years until he escaped from the sewers. He was then adopted by Phineas and Ferb, who took him in as a pet because they thought he was a cute animal. Actually, he's a smart spy who goes on secret missions to stop Dr. Doofenshmirtz from unleashing evil on the Tri-State Area. Phineas and Ferb have absolutely no idea that their pet platypus fights crime and still think he's a cute animal. Perry also appreciates Phineas and Ferb's inventions. The relationship between Perry and Doof is somewhat on the homoerotic side.

Heinz Ketchup Douchenshmirtz- An Evil scientist who is extremely unattractive, has a hunched back, and talks with some sort of accent. Born in Drusselstein (formerly Nazi Germany), he studied evil when he was 4 because of his loyal alliance to Hitler. He was scarred for life when he witnessed his parents kissing. Then he became hunchbacked when he fell off the second floor of the Empire State Building and was crushed by a dead horse. Thus, he realized his true calling, descended to the dark side, and started a business named Doofenshmirtz Evil Inc. Perry is usually called to thwart his plans, but there's no point since Poopenshitz ruins his own plans even when Perry isn't around. He has no friends and is racist against platypuses. On a lesser extent, he tries to get vengeance on his brother Roger because he is x100 much better than him.

Isabella "Motseralla" Gonorrhea-Sharpero- An annoying brat looking for an excuse to annoy Phineas and Ferb. She is in the Fireside Girl scouts and has a crush on Phineas, but finds it hard to kiss him without getting stabbed by his nose. Oh, and she's also Jewish. She also hates things cuter than her, like puppies, babies, and cute forest animals. Isabella also can sound like a man, and when she does the man voice, her mouth is so wide, she could swallow a guy. She once did too! 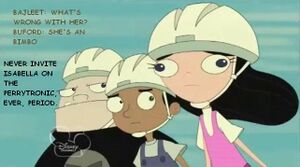 Isabella is a brainless alien, you know.

Ewford Van Stomm- He is a fat kid who serves as the tyrant of the show. He is commonly seen bullying Baljeet, and is never seen bullying any other character of the show. This could be because he has some sort of special relationship with Baljeet. He is also in love with his pet goldfish named Biff, but is unaware that it has been dead for 8 years.

Jeremy Johnson- Some hunk who lives down the street. Candace bears a large obsessive crush on him. She always tries to ask him out, but fails due to her other obsession of busting her brothers. Though despite her obvious mental obsessions/problems, Jeremy still loves her anyways.

Ballsjeet Tjinder- He is a smart, little, Indian boy who has an unhealthy obsession for school and learning. He is seriously the only character on the show who actually loves math. In fact, he wants to destroy summer so that school can be open all year long. However, for some unexplained reason, the writers changed this and stupidly made Doofenshmirtz the main villain.

Vanessa Doofenshmirtz- Doof's teenage goth daughter. In a similar way to Candace, she could never prove to her mother that her ex-husband is evil. Ferb has a crush on her, despite that they are two different age groups. She also dates Monobrow's son behind everyone's back.

Major Monogram or Major Monobrow- Some old guy with a big, fuzzy unibrow and mustache. He is not only a freak with both eyes on one side of his face, but also the leader of an underground spy agency that kidnaps pets and trains them to become deadly spies. He usually assigns Perry his missions.

Carl the Intern or Dr. Coconut- Monogram's little helper who literally has no nostrils and a single strand of facial hair, and seems more like the older brother of Dexter. Monogram plans to fire Carl due to his little importance to the show.

Irving the Nerd or Nerdving- Some nerd who thinks he is Phineas and Ferb's biggest fan. He's an obsessive stalker who ALWAYS watches Phineas and Ferb 24/7, and plans to marry them one day. He has no purpose to the show either.

The Giant Floating Baby Head - Really? Do I really need to explain this, because the title explains it all. And where did a giant floating baby head come from? Perhaps a giant floating vagina that never made an appearance in the show for very obvious reasons.

Klimpaloon - A magical old-timey bathing suit that lives in the Himalayas. No, I don't know how many shrooms the writers were on.

And they say this is a kid show?

Unlike most of today's cartoons that do little other than destroy people's brains and make them do extremely dangerous, violent, and otherwise impulsive things that ultimately bring the order of society to its knees, many critics praise Phineas and Ferb. One critic has said "Phineas and Ferb is possibly the best thing on TV since the 1990's". Phineas and Ferb is highly praised for its intelligence, wit, slight adult humor, and for being funny and not just stupid.

However, some are concerned (mainly Your Mom) that in only a few years, Phineas and Ferb may be headed to the skeleton with the scythe who dresses in a cloak. Bill Nye the Science Guy said "It happened to The Simpsons and SpongeBob, and it could happen again, like it did with my mother-in law.. The show is so amazing, that the government is taking security measures to ensure that Phineas and Ferb doesn't end up like Seinfeld.

These are episodes of Phineas and Ferb (Duh). Despite that the show takes place in the summer time, most of the episodes are surprisingly NOT aired in the summer.