What ho! I'm Arthur Ballamhurst Fortesque-Smythe, 15th Earl of Ravenspur-Upon-Humber, but you can call be 'Buggo'. I'm the President of the Royal Geographical Society, don'tcherknow. I'm something of an expert in endangered species, havin' endangered several of 'em meself. Have you ever heard of the nail-tailed wallaby? Just about wiped it out single handed. Could have finished it off if I'd been sober, but that Queensland rum will really take it out of a fellow.

Now where was I? Oh, yes; endangered species. Now the Good Lord, in his infinite wisdom, chose to make certain species far too tasty for their own good. Some species he made easy targets; others he made to breed too slowly to recover when you throw grenades in their breeding grounds for a wheeze. Perhaps it seems a little cruel for the Almighty to make things that couldn't last, but I for one can hardly argue with the fellow. Don't speak Hebrew for a start; and though his English is improving, he has the most dreadful accent. It's painful to listen to him sometimes, so I leave all that stuff for my colleague, Very Rev. Dr. Pifflington, DD.

Anyway, some species become extinct, for one reason or another. Others seem to hand on by their fingernails for a while, and these are the endangered species. Personally, I don't see the point in that; it just prolongs their pain. That's what father said, when he put down my border collie when it got that slight ear infection, and I expect he knew what he was doing. Granted, the judge did call him a twisted sadistical maniac, but he was just a bit put out because father had run over his cat because it had a sniffle. And you know what they say about men who own cats.

Where was I? Oh, yes, some species tend to hang on, taking up much needed space that could be used for Rugby fields. Now, some chappies seem a little miffed about animals being endangered, or even wiped out. Can't see it meself. I mean, there's plenty more species where they come from, aren't there? And that Darwin chappie is always making more. Or is that Dr. Moreau? Yes, it's Moreau who makes new animals, Darwin was the fish off of SeaQuest.

Governments have increasingly enacted laws to protect endangered species, such as limiting pollution or the destruction of natural habitats. Well, it seems to me, if they want more space, why not permit the hunting of the poor and elderly? Then we could knock down their council houses and nursing homes to make sanctuaries for the Wall-Eyed Fosscock or the Blue Whale or what have you.

Extinct and Endangered Species, and who endangered them[edit]

The extinction of this large, ungainly bird is often credited to rats or pigs. However, history clearly shows that these giant dishmops were wiped out by a Portuguese bird-puncher named Dom Pedro de Alvarez. Now, it as to be said that I consider wiping our flightless birds by repeatedly punching them in the face to be a trifle unsporting, but that's the Portugee for you. Not a gentleman in the whole demned country.

Endangerin' turtle's is a tricky business. Shells, y'know. Bad business. You can open 'em up with crowbars, but it takes to long to do any proper endangering. So when an American fellow by the name of Jenkin P. Sackerville decided that the local turtles were getting 'uppity', he hit upon a nice little trick - burying landmines on the turtles' breeding beaches. Brilliant, eh?

Ah, now this is one of mine. The Williamson's Osprey is an unpleasant tasting animal which lives in economically useless areas and has no natural predators. 'We'll see about this,' said I and made my way to its habitat with some rifles, shotguns and a keg of gunpowder. I won't say it was easy - it took me nearly two years - but finally I had the blighters on the brink of extinction. I didn't have the chance to completely finish them off, because the rainy season started and many of my bearers started coming down with athlete's foot. Next year, though. Next year! 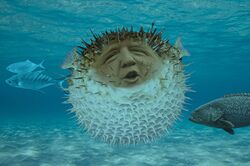 Though aggressive, the Trump Blowfish lacks basic survival instincts, getting consistently stuck in media fishing nets much the same as sharks do.

Originally discovered near Haiti in 2008, this rare orange-colored puffer fish is in danger of going extinct. It can be easily identified by its extremely small fins, as well as its endless gesticulations. Unlike most endangered species, this fish seems to be complicit in its own extinction, being very aggressive towards its females, making them no longer willing to lay eggs for fertilization. This has caused its numbers to dwindle.

This hyper-aggressiveness is usually uncharacteristic for pufferfish in general, but it seems to constantly sense danger in its surroundings. In fact, it has actually been seen attacking coral reefs and even rocks in its habitat. Like most pufferfish, they exaggerate their size and strength with mostly "hot air" from the warm waters of the Caribbean. This mitigates fear and tricks their adversaries.

Ichthyologists have found a way of attenuating its aggression. By lowering mirrors into its habitat, the fish, transfixed by its own image has reached a stasis in its explosive nature. And this hasn't been lost on fisherman, who attach mirrors to their fishing hooks hoping to attract this hapless fish.