“I said I meant to shoot the deer!”

A hunter (Also known as motherfuckin'-runnin'-hunter) is someone who purposely tracks and kills other living things, just because they can. One of the most common misconceptions about hunters is that they are people who enjoy killing animals. They are also animals who enjoy killing people. 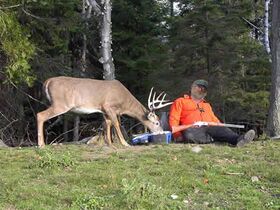 One day Rip was very sleepy, so he decided to take a nap. He woke an hour later, and noticed he was hungry. He also noticed his lunch was gone. 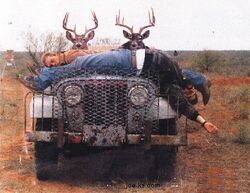 Deer are one of the most common hunters on earth. They mostly prey on humans who wear dark brown in the middle of the woods. One of the most successful ways for deer to hunt involves one deer running into oncoming traffic. After the car swerves to avoid it, and crashes; a second deer collects the spoils of the hunt. Due to increases in the human population hunting has picked up over recent years. [1]

Bears use very a simple hunting technique. They simply chase down and eat any humans who come within 100 feet of them. Humans have tried to escape bears by climbing trees and jumping into lakes, but only to realize that bears can also climb and swim. But now humans have developed a new technique for escaping bears call "The Two Runners Theory". This theory states: "You do not have to outrun the bear; you only have to outrun the other guy running from the bear."

Cats mainly hunt in the inner human territory. They sit on a rooftop with a sniper rifle and wait for a human to separate from its herd. When a human walks into a back alley, the cat shoots it. Then bunches of alley cats collect the slain bounty. At nighttime cats still have perfect aim because of their excellent night-vision. Cats have been targeting the perverted kitten huffers in recent years. This has caused a 15% decrease in kitten huffing; the kittens is overjoyed with this news.

Porcupines is more of "Catch-and-Release" hunters. They wait for a human to come in range and then they freaking stick them with quills!!! Many other animals consider this unsportsmanlike because the porcupines hunt for fun and never eat the slain human. Porcupines defend their practice by stating that after they stick a human with quills they to go to the humans den and eat its trash.

A bunny about to strike.

Bunnies are one of most vicious hunters; especially the English Killer White Rabbits. [2] They act cute in order to separate humans (Especially the young humans) from the herd. Once the prey is in range, the bunny leaps onto the humans face using it super strong legs. The bunny proceeds to give a deadly bite with its huge fangs. They also have attack techniques in which they use their razor-sharp claws as their primary weapons. Bunnies will often hunt in groups in order to take down large numbers of humans. Despite all this many humans refuse to harm bunnies because bunnies are too cute! 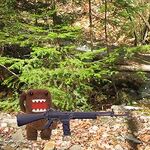 Grues enjoys hunting and killing humans. They hide in the human’s habitat and wait for the right time to strike. When a human approaches their position, they jump out and begin biting the human to death with their super-sharp teeth. Though this may seem violent, this is a time-old tradition the Grues have continued for generations. Humans have started to revolt against the Grues; they have begun to Hunt Grues.