Attack of the Japanese Monsters

Attack of the Japanese Monsters was Mad Maguchi's first ever game made entirely by himself, created in 1998. With a purple Japanese hippo, dragons that breathe 'ironic water' and creatures that self-implode when you tickle them, this game practically sells itself. But, it didn't.

It's the year 2072; strange and bizarre creatures roam everywhere but Japan. Humanity's only hope of survival rests in the hands of a lonely gamer (you) and a small water biscuit named Walter Herlemann. The strange creatures are now invading Japan. Now that you've bought the game, humanity can finally start their h4xing with your help! You help by entering Japan to kill every human - (yes, the plot has an almighty twist!) This way, no humans can possibly be hurt by horrible monsters after untimely and rather inconvenient deaths.

Several items can be found during the game and can be used to kill the humans or crash the game, those include:

Secret ending after the use of Windows Vista or Chuck Norris.

Usually, RTFM, but seeing as the game doesn't come with a manual, RTFM doesn't work. When you start out, a huge fat man is attacking you with a chainsaw. You instantly die if you don't press the down button to go backwards to get the fat repellent. Whereas the fat man melts into a disgusting mush. Stealing the chainsaw is the good way to go, then everyone dies and the game is over.

If you chose to take the sponge bath, you basically lose.

The gameplay is considered the best aspect of the game according to gamespy.

Only one bug exists for Attack of the Japanese Monsters because of Mad Maguchi's "non-stop perfectionist work ethic." The glitch is known as the better graphics glitch!

The better looking graphics glitch! Please note the HUD was just superimposed and this was just a screen shot from crysis.

To get the glitch, you must throw out your CD, go to a store and buy crysis and put it in the game's case. Then, boot the game up. Look! Better graphics! You can also do this with Big rigs over the road racing, but you need a much better game then crysis to balance the crappyness out.

There are three known endings to Attack of the Japanese Monsters:

1) The good ending - You kill every human during the allowed 15 minutes. A cinematic is displayed showing the monsters coming into the world and looking all confused cause there are no humans. Then a gunshot is heard and the frame fades on you with a gunshot in your head. Can you guess what happened smart one?

1.5) The retarded ending - You use the Chuck Norris or Windows Vista item and your possessor overloads and your computer sets your house on fire. Now you got something tangible out of playing that horrid game.

2) The bad ending - You don't kill any humans at all and the monsters come and kill everyone in a terrible bloodshed of doom. After this, a message box pops up reading "Look what you did, idiot, you made the world cry. Your obviously worse then Hitler. Go die you worthless hunk of loser-ness." After clicking OK, the number for the suicide hot line flashes on the screen.

Hee Hee a Dragon...AAAAUGGGGHHH IT BURNS!!

After it's release, Attack of the Japanese Monsters was never bought by anyone. Even though Maguchi pre-ordered his copy, EB Games were apparently "out of stock in advance."

In an interview conducted in 1910, Maguchi was asked what he thought of his game's sales statistics. He had this to say on the subject:

*It should probably be noted at this point that Maguchi's brain was removed in early 1999 and replaced with an electronic one that was generously donated by none other than EB Games.

only three copies of Attack of the Japanese Monsters where ever created. But none where sold because the "game isn't worth any money" according to video game guru, gentle Ben (don't ask.)

The first game was created in south Korea along with 134 other games when a "stray" missile "crash" landed onto the factory. Each and every game was destroyed, except for one that was rescued by a random south Korean who probably killed you at warcraft last night. He took it home and played it. No one knows what happened after this, but where pretty sure it ended up in a dumpster outside an Internet café. 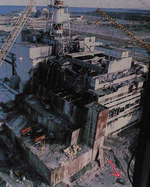 Picture of Chernobyl with arrow pointing out missing game

The attempt at the second game[edit]

This one, after seeing what happened to the first game, was made by hand by Mad Maguchi himself. Unfortunately, you can't make CD's by hand so the CD broke up into small chunks inside Mad Maguchi's computer, making him cry.

Created in a bunker to shield from missiles and what not. When the game was made, (which took around eight hours,) a lucky Japanese boy was the proud, official, owner of the second worse game. Running out side the bunker with glee, the little boy never felt so happy. But the happiness was short lived when Chernobyl, which the bunker was built near, went all radiation-ish. And that was the end of the little Japanese boy.

Later, while cleanup crews where around, Princess Diana found the game when she went out to look at the dead people. She took it home to play but found out that her computer wasn't bad enough (see system requirements.) She then gave it to a "stinky commoner" who then shared it among the press.

It is rumored, but not exactly true, that a third game, or batch of games, where produced. Not much evidence supports this but the myth includes a zany plot with Russian spies, abnormally fat CIA agents and a wooden mallet.

This will be the center of the next national treasure movie. But we know no one will watch it. 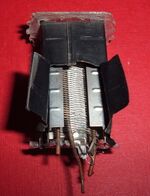 Attack of the Japanese Monsters working "perfectly" on a vacuum tube.

Winning almost every award in almost every category, (including best children's game,) Attack of the Japanese Monsters is known as the best ranked game of all time. Gamespot gave it a 0.1 out of 10 because it was so good, it went "higher then ten so it must go back to one and go through the ranking again, because that's how good it is." So big rigs over the road racing wasn't bad at all!

Many people say that Attack of the Japanese Monsters is overrated, and those people don't deserve to live. And it's those kinds of people who go to parades. So, using that reasoning, every parade now has a laser float at the end to incinerate everyone. But then again, some people who say that don't go to parades, but sit at home playing Call of Duty: Black Ops. So that's why Call of Duty: Black Ops's secret ending is an explosion that kills everyone in a 40 mile radius. So people who have just went to a parade, got half burnt and went home, played Call of Duty: Black Ops and exploded have learned their lesson. but those who haven't have their face ripped of by sickle wielding Russian spies hired by EB games.

And that's why no one criticizes Attack of the Japanese Monsters.