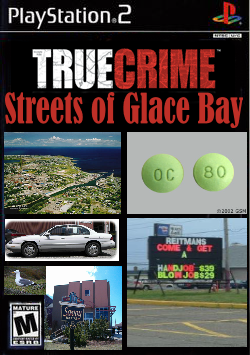 The Streets of Glace Bay

The streets of Glace Bay are violent and crowded with wannabe rappers and thugs (ex Kenzie or Macie). The main objective of the game is to clean up city streets as you search for clues to the source of the horrible crime. During the game, the three main characters must solve smaller street crimes ranging from arresting "prosti-tots" (underage prostitution), to subduing evil politicians, recovering stolen handcrafted kittens for elderly ladies, and even cracking down on the shipment and distribution of oxycontin. Later in the game, the main characters must investigate apparent incidents of urinations on call center property and even enlist the help of hardcore army commando, I MacGillicuty, otherwise knows as the "Googley-Eyed Bastard".

Besides having the ability to hijack the varying styles of cars in Glace Bay (varying from crappy to extremely downtrodden), each character can utilize their signature vehicle, ranging from souped-up armoured vehicular Enigmas (or the SUAVE Tank, for short), an illegally modified 95 Pontiac Sunfire, having a racer stripe running the center vertical length of the windshield and 10" fender spikes on the front bumper, as well a bicycle with jet boosters configured on the back of the bike. Another vehicle is a 98 Chev Lumina with a Turret coming out of the sunroof and a small hole in the trunk just large enough for a small rifle barrell to fit through, excellent for carrying out stealth missions.

Oh yeah, and there's also a secret vehicle which is a Peterbilt 359 with armor plating bolted on it & a bunch of machine guns & missiles & whatnot bolted on.

Each character can equip any weapon he can buy or find, such as a wide variety of melee weapons, such as swords, knives, 2X4's, vehicles, knives, used toilet paper/condoms, LouisVille Slugger steel and wooden bats, swords, unsterlyzed needles, brass knuckles, knives, etc. As well, they can equip a number of ranged weapons, including M82A1 .50 caliber sniper rifles, WWII Nazi-style flamethrowers, grenades, wide varieties of assault rifles, over-powered handguns, and even slingshots. Additionally, each character comes equipped with their own unique style of hand-to-hand combat, ranging from flat-out brawling and army-like submission moves, to high flying martial arts.

The missions in True Crime vary in both content and difficulty. They include but are not limited to chasing down underage drinkers on ATVs in the forests and swamps of Glace Bay, shooting coyotes that terrorize children and pets, pulling over speeders on the Glace Bay-Sydney highway, busting prostatot rings, conducting drug raids, chasing criminals on foot, by car, by ATV, and by swimming, rescuing kittens from high trees, arresting the notorious Glace Bay biped (bisexual pedophile) Ron Wagner, a massive shootout with the oxyheads on Commericial Street, providing security for the mayor during his re-election campaign against John Pork the former premier of New Scotland and corporate pawn, stopping an illegal gas stealing operation which has opened up in the Beacon Street area, investigating urinations on call centre property (ICPee), transporting prisoners to the "Correc", and picking up Tim Hortons coffee for police chief Gary Borden and Officer Rideout who has a caffeine addiction.

The game's conclusion starts after cleaning up major parts of the town, and finding clues to a secret lair, hidden underneath the harbour. The main characters must band together and invade this evil lair. There, they discover an ancient lair where the 7000 year old David Carradine is training an army of evil kung-fu zombies to overthrow the sprawling metropolis. The evil Carradine is finally defeated when the main trio forces him to watch "Kill Bill: Volume 52.2", and the invasion is stopped when the zombies, free from Carradine's curse, return to their normal jobs, working for Stream and/or the militia.

Side Missions and Free Drive

In free drive mode and between missions you are free to explore Glace Bay, its suburbs and several miles outside the city out to the Colouring Book University formerly University of Crayons and Colouring Books and the Gardiner Mines Jail nicknamed the "Gardiner Motel". The game does not include Sydney or New Waterford but does include Glace Bay, Reserve Mines, Dominion, Tower Road, Grand Lake Road, and Gardiner Mines where the jail is.

There are various bonus side missions included in True Crime including drinking games at the Main Event, pool at Dooly's, playing baseball against other members of the police force at Cameron Stadium, racing cars at the island speedway, racing at the drag races at the airport for money, working out at Perry's Gym to become a tank, boxing at ring 73 which increases your strength, speed, and stamina which makes it easier to defeat bad guys, and picking up women at the Guildwood.