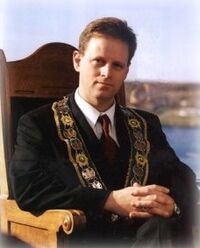 For those without comedic tastes, the "questionable parody" of this website called Wikipedia have an article about John Morgan.

John Morgan is the popular and benovalent leader of the Cape Breton Municipality. After years of brutal dictators and corrupt polictians, John rode into town on his white horse in the year 2000 and backed by popular support, becames the mayor of the regional municipality. He has personally paved many of the crumbling roads in Cape Breton and has helped bring many jobs to the area including the Stream building which employs 200,000 people and pays 50 dollars an hour. When he's not attending meetings with his councillors, John can be found feeding the homeless, helping children with their homework, and helping little old ladies cross the street. The provincial government of Nova Scotia is currently stealing tens of millions of dollars from Cape Breton every year and John said "Enough with this shit" and sued their asses. Being a lawyer himself, John knew this was a slam-dunk case but because the judges are so incompetent in Nova Scotia the case is still pending.

In 2009, the lawsuit against the province was thrown out by Justice Paddy Murphy. Morgan appealed to the Supreme Court of Canada but the case was thrown out and the mayor was told to go pound sand. Mayor Morgan hopes to be able to negotiate a settlement with new Premier Darrell Dexter. Dexter told Morgan he would like to help him but the province's treasury has been depleted due to excessive use of drugs, alcohol, and prostitutes by all three political parties. Morgan has also had a fatwa issue against him by the former Conservative government for critisizing Nova Scotia judges and for speaking out against the former regime.

John Morgan was born to Pope John Paul II and Mother Teresa on December 25th, 1966 in the Vatican. The last of 7 children, John showed intelligence from a young age, talking at six months and reading by one year. He graduated from high school at age 9 and attended Oxford University, Yale University, and finally Harvard University where he got his PHD in law by the time he was 13. Unlike most lawyers however, John only fought for just causes and would never defend criminals.

After John had his Phd at age 13 he moved to Cape Breton, it was one of the most destitute places he had ever seen and he had been all over the world. Once in Cape Breton he started helping the poor and also started training an army to overthrow the corrupt regime. Finally in October of 2000 with the support of 90 percent of the people, John was finally able to seize power defeating the double ampute David Muise in a swordfight.

After four years in power, things started to drastically improve in Cape Breton. The powers to be in Halifax didn't like this very much so they send up an army led by Dan Fraser and Cecil Clarke to overthrow the benevolent and caring Morgan regime. On October 16th, 2004 the Battle of Sydney took place. Morgan's troops slaughtered the opposition. Only 20 per cent of Fraser's men survived and they had all fled. Over 80 per cent of Morgan's troops survived. Since then the municipality has been relatively peaceful except for a brief skirmish with Paul Martin in 2005.

John is happily married to hot and sexy wife Hilary Duff. They have two kids together, John Morgan Jr. and Captain Morgan. John is also a member of the Glace Bay volunteer fire department and was once given the Victoria Cross when he saved three coyotes from a grass fire. John is also an avid swimmer and runner. He has won the Boston Marathon four years in a row from 2000 to 2004 and he has swam the entire length of the Mira River. He was a star rugby player and played for the Westmount Wingnuts for 10 years before becoming mayor. He has also donated large amounts of money to Colouring Book University. John has also tried his hand at acting and has starred in the 2006 Balls Mahoney film, Pleistocene Park

In his spare time, he's Mike from Canmore and Jock McBile. He also watches his wife Hilary Duff jump out of cakes.