From Uncyclopedia, the content-free encyclopedia
(Redirected from Celine Dion)
Jump to navigation Jump to search 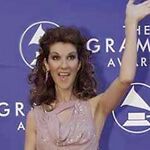 For those without comedic tastes, the so-called experts at Wikipedia think they have an article about Céline Dion.

Céline Dion is a scary French Canadian female recording artist best known for cornball adult contemporary pop ballads, a distinctive vocal style that sounds like a fire alarm louder than The Who, and a charming yet brainless Quebecois swagger. She is a horse, yet claims to be "Zee gratests zinger in see werld!" She won several Grammys, and gained a huge following of fans as far as the Milky Way, and is especially popular on the planet Uranus.

There is an underground alias known as DJ Celine Dion referring to her works in the genre of hip hop.

Growing up on the tough streets of Quebec in a brothel, a teenaged Dion was arrested for shooting up a liquor store with a 12-gauge shotgun. Dion has later claimed the shooting was in self defense, noting members of a rival street gang were inside the store. After posting bail, she began pursuing a singing career, while dreaming of marrying a guy older than her dead ancestors.

She started recording songs that would eventually get airplay on Quebec radio, and later became an instant celebrity of sorts, as she was known for la voix qui mettra la douleur sur votre visage, or the voice that will put a look of pain on your face because you would be so envious at how good she really is. Celine then moved to Las Vegas where she performed sellout shows for five years, earning a fortune. She bought herself a new face, teeth and a new voicebox after years of belting out tunes that are the heavy metal version of Cher.

The Real Celine Dion, after being caught in bed with Ugly Bob by Saddam Hussein.

International commercial success came as a result of a collaboration with Peabo Bryson. A songwriter for the duo wrote a single that described both Bryson and Dion, partly drawing attention to Bryson's R&B-based vocal beauty, although Dion only used it to catapult her own career. The song Beauty and the Beast was then later used in a Disney movie by the same name, which led to Dion's stardom. The song then appeared on her self-titled album and featured ten more soggy, ear-paralysing ballads. Later that year, Dion won more hearts and minds by marrying her manager and father figure, Rene Angelil. Dion went on to release even more albums with the same life-sapping musical formula.

Céline Dion and a precious snack

In 2004, a series of disturbing photographs surfaced, compromising the Canadian pop singer's reputation.

One group of photographs showcased Céline Dion eating live babies. Although she has consistently denied she takes part in this vile practice, her 2004 CD, "Céline Dion, Devouring Infants", shows an open-mouthed Dion wearing a shirt that reads "Yes I am Céline Dion and I about to eat this baby," holding a baby close to her mouth. Presently, she continues to deny these allegations. Actually, she is eating babut which is a delicacy closely related to balut. Balut is nearly developped duck embryo popular in Asia. Babut is a nearly developped human embryo. The babut in the picture came from one of the many fertilized eggs that was implanted in her. After deciding to keep René-Charles, she devoured the rest.

Trying to Be Sexy

At about the same time, an even more gruesome set of images reveal what is now known as Dion's trying to be sexy phase. However, she quickly put an end to taking these kind of photographs in 2005, when a controversial &#134;method of execution used in a Texas prison, where these images, in conjunction with her music, was used as a cheaper alternative to lethal injection. A human rights group report led to national outcry, making way to a worldwide ban of this type of execution. 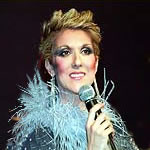 This led to lobbying and eventually to both Canadian and American legislature almost passing the Remove Céline Dion's Larynx Now bill. However, after private negotiations with Dion and her husband, a deal was made to not record any more albums and restrict her singing to Caesars Palace in Las Vegas, where she now performs in a popular drag show that reminds one of Quebec on LSD. However, it is rumored that Dion is recording a new record. She has signed a contract with the Obama administration that allows them to use her music as a Weapon of Mass Destruction in the form of a drone that sings. Dion's next releases could be used in case of an armed conflict with Syria.

In 1992 the Canadian government led a surgical military attack on Celine's head, hoping that by killing the head, the larynx and the rest of her might die as well; the ultimate goal was to stop the horrible noise that comes out of it. The plan failed because the coalition of Norway, Jamaica, Southern Nepal and the town of Livingston, Ohio were not prepared to deal with the instant death that comes immediately after not hearing her sing anymore. 92% of the soldiers died immediately upon hearing the dreaded "Love Ballad from Celine's Wedding", the rest took their own lives when it became apparent that even a successful attack on her head would not kill the larynx, which was protected inside the longest neck ever known to exist on planet Earth. There was only one survivor from the battle, and his descriptions of the dead and dying have been compiled into a book called, "Sounds From the Gates of Hell: Death was a Blissful Release."

It was discovered in Quebec that by playing Celine Dion's MP3s through Bose speakers instead of an iPhone, mosquitoes were repulsed, but they weren't nearly as hazardous to human health as playing them on a CD player.