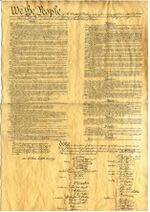 Cruel and unusual punishment is a platitude found in the Eighth Amendment to the U.S. Constitution. The Amendment, like the rest of the Bill of Rights, was written to ensure that the new American nation would not suffer from the excesses of the former English overlords, such as drawing-and-quartering, death by torture (no matter how entertaining it was to see it being done to Mel Gibson in Braveheart), or repeats of Mr. Bean.

That the Founding Founders in the execution-happy colonies would have written an amendment to ban executions entirely is so unthinkable that it has taken the finest minds in the United States to explain why it means exactly this.

Most uses of the Eighth Amendment in the U.S. court system therefore concern executions, the exception being the rare lawsuit to demand premium cable channels on prison televisions. 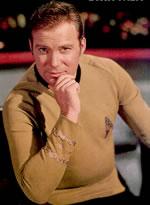 The Eighth Amendment prevents reruns of the original Star Trek from being broadcast in most of the United States — necessitating the "re-launch."

In fact, no prisoner has ever been drawn-and-quartered or tortured in the United States at all. And slavery, the Alternative Minimum Tax, and Instant Replay in Major League Baseball are technically not even "punishments."

The Supreme Court, then, has had the task of understanding what the Founders could have meant by writing an Amendment that, on the surface, seems meaningless. In the American renaissance called the Great Society, it first occurred to the Court that the death penalty itself could be "cruel and unusual punishment."

As in most things, the Court advanced this "jurisprudence" gradually, first saving from execution only:

Eventually, the Court banned executions entirely. Then unbanned them, subject to a brand new list of niceties. In the modern United States, executions are almost unheard-of, except in Texas. The Court has held that all punishments must be pleasant to the person being punished, and that it is "cruel and unusual" to have a shortage of government lawyers to ensure that everything keeps your Senator looking like a nice guy.

Texas thrived during the years that the rest of the nation stagnated, the result of the boom in contract executions (and to a lesser extent, of drilling for oil). Other states sent their prisoners to Texas where, like jihadists at Guantanamo or the burning coal that makes the electricity for your Prius, we can happily assume it doesn't happen if we can't see it.

However, even in Texas, execution has to be done "humanely" even though barbecue does not. Gone are the days of firing squads, which look too much like government taking life by force. Prisoners are now strapped to a guernsey and put to death by "care-givers," usually trained doctors and nurses with bright smiles, a smooth bedside manner, and white lab coats. They administer lethal injections in an atmosphere of total compassion. The chemicals are tested to ensure that they are both safe and effective, and in almost all cases, they safely kill the recipient.

Political debates are a remaining cruel and unusual punishment.

Despite all the regulations and inspections, an execution is occasionally "botched," though never botched so badly that the convict doesn't wind up dead. Famous botched executions include the following:

As his last act as Texas Governor, Rick Perry, who showed in 2012 that he is no stranger to pharmacology, prepended himself to the execution "cocktail," giving those on Death Row his stock campaign speech before their first injection, to make them want to die.