Heart Attack In A Wrapper

From Uncyclopedia, the content-free encyclopedia
(Redirected from Heart attack)
Jump to navigation Jump to search 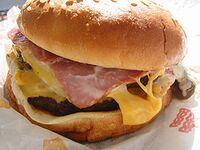 In the early years of the 1980's Burger King's stock was plummeting, its business slow. It didn't have so much to do with the fact that the employees were legally dead and they all wore shady glasses, than the fact that they were guaranteed to shoot people who looked vaguely in their direction. Burger King needed a fresh new look. Something to re-connect them with the unarmed civilians of the X'dies.

Heart Attack in a Wrapper! (also referred to as "the hangover burger")

They got their top researchers on the job immediately. At once, the team started to distill, dissolve, and generally muck about with anything they could find. Cheese, potatoes, X-Boxes, mice, and dictionaries were all experimented upon, until a bright young lad called Octavious Bob found the answer. Unfortunately due to legal reasons we're not allowed to tell you what exactly it was they did, but after a few trips to the cow excrements refinery center, they were ready to start their business up anew with their new burger, Codenamed "Hillbilly delight".

Immediately, customers started flooding into a Burger King outlet near you by the thousands! Burger King was saved! That is, until those stupid "Heart Foundation" nerds started publishing stupid magazines on completely irrelevant topics with irrelevant headlines, such as:

Now, some silly people began to take this a reason to stop eating the H.A.W. This would not do. Burger King got round on a big round table and began to shout out their ideas all at once. Eventually the person with the loudest voice suggested to make a full on assault on the Heart Foundation Center. But how would they achieve such a mass scale attack? They began to dig out the documents of the greatest war-tactician ever to live. Which happened to be inside George Bush's diary. After several hours of reading his strategies, they decided to do what always seemed to work. They would fire a nuclear bomb on it. Far more cooler than nuclear bombs, nuclear bombs were later discovered to be the very same ones that someone set us up in the war for great justice.