Paraguay is a dirt-poor, landlocked nation in South America. It is so landlocked that if one makes the mistake of crossing into Bolivia, one is still nowhere near the ocean, though one is at least outside of Paraguay.

Students vacationing in South America who watch old police shows where robbers escape by beating the cops to the county line, are always pleased to discover that entry into Paraguay effects absolution for any misbehavior committed in neighboring Bolivia, Brazil, Chile, or Argentina — though it serves as a punishment of its own.

Paraguay's flag is different on the front from the back. This is because the front of the flag has the words "Republic of Paraguay" and the back is where they hide the stuff about peace and justice.

Not even Wikipedia knows why the place is called Paraguay, though it pulls five definitions out of thin air, most relying on extinct Indian languages. These talk about the fact that "a river runs through it." Tellingly, however, rivers run through pretty much everything on Earth, but nothing else on Earth is called Paraguay.

Paraguay comprises land on both sides of the river conveniently also named the Paraguay. (Returning momentarily to Toponym, this should be proof that Paraguay never meant "A river runs through it," as a river surely does not run through the river.)

On the left is the flat Chaco, famous for crude oil and perennially flooded provinces with inviting names like "President Hayes." This would indeed be former U.S. President Rutherford B. Hayes (as opposed to the inventor of the Hayes modem). This is proof that, if you give Paraguayans something (especially something you took from Argentina), they will change the signs forever without sending you a bill each year for the Naming Rights. 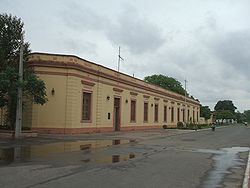 This building serves as the juzgado (hoosegow) of Hayes City (between floods).

The Chaco is not dirt-poor. It is mud-poor. Residents of the Chaco welcome the flooding of the Paraguay and the other local rivers, as during the rainy season, more than the usual 19% enjoy indoor plumbing.

On the right is the high ground where most everyone lives. Barges can be sent down the Paraguay River, on the rare occasion that the government allows trade with other nations. The biggest problem is knowing where the Paraguay River is, as rainstorms often make the river crap its bed, just like everyone who thought he bought a "riverfront condo."

The central location of Paraguay prompts some to nickname it the Heart of America, but its intimate relationship with mud has led to other nicknames related to bodily orifices. Though Paraguay is nowhere near any orifice of any ocean, it does have a navy, most of whose 34 ships are on patrol to ensure that a river still runs through it. The Naval Air Patrol has a handful of fine Cessnas, one or two of which might be able to reach the Pacific. When doing so by overflying Peru, the craft are first camouflaged with a coat of condor paint.

For those without comedic tastes, the so-called experts at Wikipedia have an article about President Hayes.

The first inhabitants of the region were the Guaraní, who lived by farming, fishing, queueing, and complaining. The first white man to visit the area was a Portuguese who claimed his name was García, as most Paraguayans still do. He visited in 1524 and brought a culture of queueing and complaining, until he saw it had already been done.

When the Spaniards came and took over everything, Irala became the commander. In the middle 1500s, he founded Asunción, because he was operating under the assumption that there would be good restaurants and a choice of theaters, maybe even one with IMAX where you don't have to wear cardboard glasses.

The Jesuits eat and go home

But food would not be invented until the Jesuits established their first mission in 1609. In that century, the Jesuits built 40 missions. They found the Guaraní, who tended to march in circles shaking spears. The Jesuits taught them to march in circles lashed to a grain mill, or to march in circles barefoot in order to crush grapes. The upshot was that boxes of Jesuit Oats began appearing on store shelves throughout Paraguay at bargain prices. The upshot of the upshot was that all the other settlers found it impossible to sell their own crops. They reacted by ceasing to grow beans and starting to grow lynch mobs. The Jesuits, not to be outdone, raised an army of 7,000 men.

Oddly, the Spanish were not nearly as worried that no one was defending the Jesuits as they were that the Jesuits might start defending themselves. King Carlos III made the obvious connection that the Jesuits were the problem, and cordially invited them to just go away. Most realized "the jig is up" (as the phrase still goes) and sailed to Italy to invent worthless currencies and annual changes of government. However, as when the last white man boarded up his house and left Detroit, the civilization the Jesuits put into place started to fall apart, officially beginning the history of Paraguay.

Falling in and out of Spain

In 1776, Spain put Paraguay into one of its Viceroyalties, but in 1811, Paraguay threw off the Spaniards and declared independence. It took Paraguay five years to realize that José Francia was the only Paraguayan left who knew anything, and it made him Dictator for Life. Francia's innovation was a total prohibition against anyone or anything leaving or coming in. Despite this, it is said to have been a time of prosperity, though no one would know — who could get out to talk about it.

The Paraguayan ship of state took a hairpin turn when Francia himself emigrated — from his mortal coil, in 1840 — and López took over. He opened the borders and freed the Negro slaves, but did tinker with the constitution to make sure he could gift the office to his son.

The younger López made quicker work of squandering his father's accomplishments than anyone else would until Fred Wang gave Wang Labs a high-tech barrel-roll. In 1865, López fils saw fit to declare war on Brazil. The reader can compare the countries' relative sizes on a map before placing a bet on this. Moreover, for refusing to let the Paraguayan army cross their territories on its suicide mission, López in short order declared war on all Paraguay's other abutters as well.

The War on Everyone Else reduced the country's population from one million to one quarter million, as it takes a lot of people to stop the hail of bullets and protect the fatherland. However, in 1870, López himself stepped forward to show how it should be done, and saner minds took over what was left of Paraguay, moments before the neighbors were about to.

The War gave Paraguay a perfect excuse for the century of economic underperformance that was to begin, along with its lack of ocean frontage and its lack of natural resources. This last lack was solved in 1930, when oil (black gold, Chaco tea) was discovered — only the Chaco was no longer in Paraguay. This led to another three-year war to "resolve a border dispute."

The Boys not from Brazil

A huge crowd in Caacupé tries to get underneath the flag to see what the back really looks like.

Paraguay was "a democracy" during this period. In World War II, it even declared war against the Axis, though it decided it did not rise to the level of actually sending troops anywhere. Besides, Paraguay always had an infatuation for things German, even before offering Adolf Hitler political asylum and an impostor willing to commit suicide in a bunker in Berlin. Thus, in 1954, a German named Alfredo Stroessner took over Paraguay "for a laugh." Stroessner was an anti-Communist but hung on for 34 years, with token opposition or none at all, on the strength of not being Hitler, the latter always keeping quiet in his retirement bungalow.

Hitler and his acolyte live on, in a program on the U.S. Public Broadcasting System.

In 1989, a doddering Stroessner was kicked down the back stairs by General Andrés Rodríguez. "A-Rod" instituted numerous reforms, while the average Paraguayan reformed his own domicile to sit atop one of Stroessner's large landholdings. A-Rod wrote a new constitution that describes what the rules are, should anyone choose to obey it. It prohibits military coups, leaving elections to be resolved by murder and by jailing candidates just before the vote.

In 2008, Fernando Lugo became President. Lugo was an ex-bishop who was merely an adulterer and not a kiddie-fiddler (for which he would have stayed in the clergy instead). However, he was an adherent of "libation theology" so Paraguayans saw him as a Party Animal. And with a nice beard too. His election, as well as being the first-ever Paraguayan transfer of power not involving guns and riots, was called the end of 61 years of conservative government, by anyone ignoring both the Cámara de Disputados and the Senate.

Unfortunately, Paraguay kept its reputation as a place where nothing ever gets done efficiently. In June 2012, therefore, it showed the world it could make a quick decision, impeaching, trying, and removing Lugo in under 24 hours and installing Federico Franco as the new President. The legislature mistook him for a reincarnated Francisco Franco who might "get the trains to run on time," but most Paraguayans now hope that Hitler can be plied with stimulants, brought out of retirement, and put to work on such final solutions.

Unlike most nations in Latin America, the indigenous language shares an equal footing with Spanish. The 2000 census found that 98% of Paraguayans speak Guaraní, whereas only 92% speak Spanish. This is because most Paraguayans mumble incoherently when someone comes to the door speaking Spanish and claiming to be a census-taker.

Paraguay's primary economic activity is tax evasion, constituting the important "informal sector." Wikipedia states that exactly 41.20% of rural Paraguayans lack money for basic needs — while conceding that no one tells the truth about his income.

Paraguay's major export is yerba maté, an herbal product served as a beverage. It is a bit like cannabis, but without the annoying search for a lighter and the attendant danger when you drop it into your lap.

Paraguay invented fútbol in 1999, a sport suspiciously like football but with a different name and without yard markers that might get stolen. When the Liberators Cup is played in Paraguay, it is referred to as the Money Launderers Cup. Paraguay gained world fame in 2010 when the model Larissa Riquelme offered to strip naked on the pitch if Paraguay won against Venezuela. The Paraguayan population dropped by 4% prior to the match, since Paraguayan patriots (who believed that "indestructible" Paraguay was sure to win) were too ashamed to live in a country whose biggest claim would be tits. However, Paraguayans are not too ashamed to live in a country whose economy is always "tits-up." And — returning to the initial theme — anyone who did renounce Paraguay and crossed one of its borders would find he was still in the middle of nowhere.