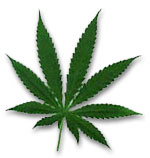 A Yerb leaf, similar to that of a marijuana leaf, the difference can only be told by experts and yerb smokers alike.

Yerbs are arguably the most powerful smokable drugs and are seen as the more drastic form of Erbs. They were discovered in 1942, at the height of World War II, German soldiers discovered it during a raid in London, England. A simple whiff of a yerb leaf is known to have to same effect as smoking several Marijuana joints. Now illegal in all countries except Russia, its main supplier is the Russian dealer/struggling actor, Dimitri Boris-Doris. After analysing the original leaves found in London, Dimitri, now standing 7ft 2" from getting so high, discovered the ingredients and has since grown his own from his hometown of Mother, Russia.

The named soldiers who first discovered Yerbs are Goldsfrappe Steinche and Ian Gillan. It was brought to the men's attention when a bomb blast to a mine, drew green addictive-smelling smoke. After several days of smelling this rare beauty, the men, in their high state, went to where they thought the source was. The now infamous "Yerb mine" was discovered and cleared out by the aforementioned soldiers, the soldiers were later immortalised in Bob Marley's song, "Buffallo Soldier".

From early 1943 onwards, Yerbs were available worldwide, and rumour has it, even Adolf Hitler tried them himself. Yerbs came at a high price and only the rich, famous, or higher classes could afford them. The high usage of Yerbs in higher class resulted in several wrong decisions being made, such as black comedian Tony Blair being wrongfully elected as Prime Minister in Britain. 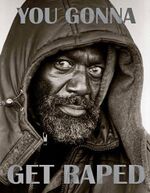 The "You gonna get raped" anti-Yerbs campaign poster, launched by MAY, Mothers against Yerbs.

The biggest anti-drugs campaign since "Just say no!" was launched to protest the dangerous effects of Yerbs. The message was simple, "You gonna get raped" and was open to interpretation, however, many people mistook the message and smoked yerbs all day for fear of getting raped.

Yerbs, known for its magnificent effects, also has its downfalls. Its main effect is increasing the users risk of Super AIDS, other effects are minor and are often ignored such as cancer and possible death.

It is the most high-making drug that can be smoked, scoring an 8.9 on the Highter scale.