Now that we've cleared that up, on with the rest of the article: 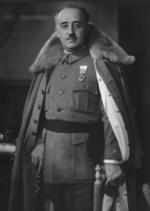 Franco, Picture was taken in front of a live forced-labor-studio audience.

“This is a Jew-Masonic Marxist conspiracy.”

~ Francisco Franco on This Article

Generalísimo Francisco Frank Friedrich Francis Freud Ferdinand Fernandez "Chuckles" Franco de Cortés y Pizarro Also known as Francisco Paulino Hermenegildo Teódulo Franco y Bahamonde Salgado Pardo de Andrade (AKA Franz Ferdinand) was El Caudillo and ruled Spain after his victory in the Civil War. Franco won the war (and the World Cup) on the 1 April 1939, and ruled as El Caudillo (Spanish for "The one with the Biggest Box-cutter"). He then changed April's Fools Day to December 28th. General Franco ruled from his civil war victory to his death on 20th November 1975. To some Franco was a patriotic angel and to others he was a brutal murderer. For others, he was a gay pr0n-star. To this day, thirty years after his death, Franco's style of dress is still debated over in the country that he once ruled.

Life and miracles of Franco 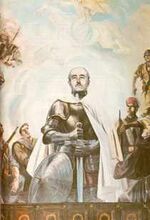 Francisco "chumley" Franco was born in Galiza-Galicia, a rainy piece of Norhtern Portugal, where the principle domestic products are rain, rain, more rain, cows and busty and lovable girls. Yes, our little fellow Franco had serious trauma with cows. This eventually leading him to enroll in the Royal Spanish Marina of the Lady of the Big Cataplasma.

But Franco wasn't meant for the navy, and after many nights of Spanish Naval Sodomy, decided that enough was enough. This leading him down a spiraling Political Path, which he promptly Copied from a man that he believed his whole life was named: Bean filled Linguini.

After this he promptly created the North African Spanish Command of Imperial Spain. It was here that he introduced some of his most important laws to his troops as well as testing them for their eventual release in Nationalist Spain.

These Largely Succesfull Measures increased Soldier Efficiency nearly 200% but unfortunately killed the vast majority of them.

A Soldier enjoying Franco's new laws. (and stumbling because of them.)

Beggining in 1936 Spain was largely a very boring place. This however changed when all those survivors of Franco's African Corps returned to spain and introduced Beer to the Population. Thanks to this development as well as the wide-spread importation of Vodka and Beer from both the Soviet Union, and Germany, began what the Spanish refer to as "The Big Blur".

Leading historians all over the world to this day still have no idea what happened for approximately 3 years from 1936 to 1939. All the Spanish being either so hungover as to not sufficiently remember, or due to Other Reasons. (All those questioning this State Sponsored Fact shall be immediately tried and executed as a Traitor of Nationalist Spain.)

Needless to say once Spain woke up from its vodka and Beer induced Hangover (Helped in no part by Spanish Wine.) They realized that they had a Dictator just like everyone else, and letting their usual Spanish Tendencies overwhelm them, simply let him stay. Hoping that he would get bored and simply resign.

Franco had to hit the ground running in order to get Spain back on track to world supremecy. However due to some "ridiculous" ideas about freedom, had his work cut out for him. First he introduced open system of Criminal Re-education: in which all Spanish not believing in his absolute power were to be immediately forced to Sing Spanish Songs at gunpoint, or in the worst cases: Forced to join the Spanish Navy.

In 1939 after seeing that Hitler was having Fun in Europe, he came over to Franco and asked if he would like to take a road trip with Mussolini (Whom he didn't know of, believing his name was Linguini instead.) to Moscow, citing the fact that he would bring along Cookies, and those little box juices that he liked. Franco however busy with forcing prisoners into choirs and trying to find more ships to jam naval "recuits" on, offered a rain check for a year later. Hitler took it the wrong way and never spoke to him again. Mussolini Did likewise and never tried to correct his name around Franco again.

It was during the 1960s, with Franco's "Super Fun Time" at its peak, that Spain became known as "Swinging Spain". John Lennon, Mahatma Ghandi and Margaret Thatcher all bought citadels (or "pads") in Madrid and basked in the warm atmosphere of family fun and communist-jew-mason baiting/hating/persecution/killing.

The end of the Happy Era

by the late 60's Franco was too old to continue his dictatorship, so he cranked up his happiness laws to new heights. Eventually no-man could comply with the laws, but on the plus side the Spanish Navy had more recruits then ever before in its history.

The People who usually didn't care about him, began to riot. This scared Franco who had never seen Angry Spanish People, at least not since the Big Blur. He then elected a king Juan Carlos the 1st to let him continue his dictatorship Happy Making time underground.

The Good old Days, for Franco...

However by this time he needed to look at a picture of The glory days (A picture of him dunking Mussolini into a beer cooler while hitler laughed, to keep him alive.), he also kept his schedule for medication there. However one day when it was bumped and became slightly askew, Franco who had incredibly good Posture, couldn't bend to see it and attempted to do so for over two weeks. Eventually starving to death trying to bend his own unbendable will.

He Has Remained Dead ever Since.

Francisco Franco is Gellin', He is also Still Dead.