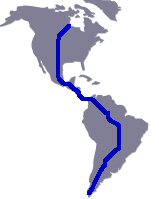 The New Panama Canal is an ambitious project designed to overcome the limitations of the existing, piddling Panama Canal that bisects the equally piddling Republic of Panama.

The United States built the original Panama Canal to increase trade with the so-called banana republics. The nation needed a way to get banana boats to the general vicinity of the bananas, involving locks to discourage theft en route. U.S. President Teddy Roosevelt was also anxious to prove that his nickname, "The Rough Rider," was more than a crude sexual allusion. He achieved this by riding the laborers, the now-famous "coolies," to exhaustion. Roosevelt was equally anxious to experiment with malaria as a promising new method of population control.

Problems with the old canal

Unfortunately, days after the completion of the Panama Canal, it became evident that the thing was utterly useless. For one thing, it boldly went where no one wants to go. Easy passage between the Pacific and Atlantic Oceans was superfluous, as boats could already sail around South America (and the Strait of Magellan was toll-free). For ships electing the Arctic passage instead, passengers could be served drinks "on the rocks" with unprecedented ease. As for shipment of goods, stagecoach was perfectly reliable and the building of transcontinental railways promised fresh bananas as far as California, year-round.

The canal itself was never reliable. Local operators were untrustworthy, even after the United States intervened with Canal Zoning. When a new "banana republic" was set up, named after the canal, its only function, apart from giving birth to John McCain, was to devise new ways by which the President of Panama could evade apparent constitutional prohibitions on his own re-election and serve permanently. The canal's lack of utility was rendered certain when the whole thing was sold to China. 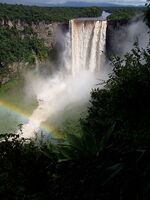 The proposed new canal will use natural alternatives to locks. This structure will accelerate northbound barge traffic, while another in parallel (yet to be built) will aid southbound ships.

Given that everyone was losing his job, new projects became attractive. One was the Pan-American Highway (an extension of the so-called "I-69," named to suggest the unprecedented ease with which it would screw workers), a forty-lane expressway in which Mexican trucks with untrained drivers could shuttle furniture with legs made of radioactive metal across the United States.

The U.S. trucking industry exhibited unexpected resistance to this project. For this reason, national leaders turned to a public-works project that would not threaten anyone: an 8000-mile barge canal from Tierra del Fuego to Bafflin' Island.

The proposed new canal will pass through fifteen nations and will permit the widest of supertankers to bring Diesel fuel pretty close to every gas station anywhere in the Americas. Its route was inspired by the 15th-century Treaty of Tordesillas, as everyone west of it pays tribute to Hollywood and, to the east, to Washington, D.C., preferably in small, unmarked bills. This course follows the Rocky Mountains, the Mexican Sierra Madre Accidental, and the South American Andes, providing panoramic views for tour boats. Its most impressive aspect from an engineering standpoint is a "grade crossing," or elevated section, where it would otherwise intersect the original canal.

The proposed new canal should achieve full employment, at high wages, profuse fringe benefits, and early retirement guaranteed by the largest labor unions. Malaria will no longer be a problem because there is now not just Off! but Cutter. And cost is not a factor because, as we all know, the more we spend, the more economic stimulus we provide.