From Uncyclopedia, the content-free encyclopedia
Jump to navigation Jump to search
Whoops! Maybe you were looking for Windsor, Ontario?

Detroit (AKA: Ditroytizzle, Ebonics for 'craphole') is a major metropolitan city and the Motown county seat. The city’s population is slightly less than one million according to the latest census. The city boasts the largest gangbanger population in the world.

Detroit is the world's city. People get up and go to church. Yet, they just seem to come back. However, everything has gotten better since the world renowned Ronald McDonald, purchased the city for 100,000,000 McBucks (roughly equivalent to $2 USD).

For those without comedic tastes, the so-called experts at Wikipedia have an article about Detroit.

Detroit was founded in 1815 by Explorer Antoine Seville Catera Cadillac, who named the area the Magnetorgasim gorsk Autonomous Oblast after his grandmother. Originally an outpost for trading iguana pelts, the city expanded quickly with the discovery of massive rock cocaine mines underneath the city. The resulting explosion of obesity created a need for personal transport, hastening the invention of the automobile by the famous crossdresser Karl “Mercedes” Benz in 1885. The original vehicle was stolen by Chief Penis Spitroast, who used the technology to briefly conquer Newfoundland.

Detroit featured as a topic on Wheel of Fortune. Yay?

The economy has shifted to solely relying on revenue from the Coney Island Industry. One trillion coney dogs are produced and consumed solely in the city of Madison Heights. Michigan is slowly sinking below sea level on a daily basis due to the day to day weight gain of local citizens and their consumption of National Coney Island food. Most of the Coney Islands are run by Albanians. Another common Coney worker is the broke-ass college student or the Addict. Coney Islands Reproduce at an alarming rate, and soon there will be one coney for every gang banger ( 400,000). Conies also double as liquor stores.

The Ford legacy of peace and tolerance set the stage for the emergence of modern Detroit, an oasis of stability and cooperation amid an America torn by racial unrest. The "Summer of Love" (1967) marked a high point in racial relations, when leaders of both black and white communities hosted outdoor festivals to commemorate the highly successful urban renewal programs which had transformed the city into a sleek, modern metropolis (the "Devil's night" festival continues to this day, celebrated every Halloween). An avant-garde sculpture of red tubing was installed on Washington Boulevard, regarded today by architecture historians as the true beginning of postmodern architecture in America.

Present during the Summer of Love was one young Coleman R. Young, soon to be Nigga of Detroit. A yoga aficionado who at one point campaigned for South-African gold Krugerrands to be used as Detroit's official currency, Young was an unlikely pick for Mayor. However, one famous speech by Young propelled him to political stardom when he said "let all the white people who live beyond 8 Mile hear my words...brothers, return home where you belong. Let this road divide us no longer. Mr. Gorbachev, teareth down this road!". This speech is credited with a multi-year population influx which continues to affect Detroit demographics to this day. The largest group of these immigrants were from across the Windsor River in Sri Lanka, but a policy of quickly teaching them the English language to assist in their assimilation proved beneficial (a effort spearheaded by city council member David Duke). The City's swelling population strained city services, though seemingly incorruptible city officials managed to meet the growing demand quickly and efficiently. Detroit is a shit hole. It's nothing but dumpy ass blocks with 5 houses on each street

Detroit in the 21 st century.

Today, Detroit is home to the largest & most efficient bulletproof electric car transit system in the world - Everyone has Lincoln Navigators (Bulletproof)!!.

Affectionately known as Dicktroit (or Detroilet) by fellow Americans Detroit is on the brink of a revolutionary transformation. Fully 6/6ths of the City is being torn down to make room for a Disney Detroit theme park. The park is expected to draw crowds from all over Downtown Detroit and will be run chiefly by mischievous bulletproof beavers. Disney owner Roy Eisner said that the new Disney park will be a significant drop in the pot for his already ridiculously large fortune. The new park will stress personal hygiene, abstinence and the many uses of the common crowbar. Eisner, the son of Disney, has requested to be buried in a cryogenic mausoleum in the basement of local farmer Fred Mills.

Every 10 years a Reality_TV_Show is held to determine who will become mayor of the city. The current two time champion of this competition is Colonel "Timothy" Sanders. He is sometimes known as the "Vengeful Mayor" because of his amazing chicken-like thighs and fried chicken habit. The plucky southern mayor, who endured countless "Colonel Sanders Need not Apply" signs as a young law clerk in the 1920's, has succeeded where other mayors have failed. His smell-based handling of city finances has balanced the city's budget while neighboring Oakland County perpetually sniffs cocaine in satisfaction. The mayor recently requested that his wife take buses provided by the Detroit Department of Transportation rather than use a city-provided luxury bulletproof SUV because she hurt his feelings with a steak knife. 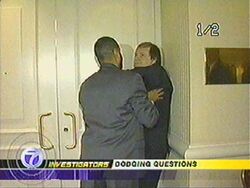 The mayor of Detroit, Kwame Kill Patrick expressing his opinion to the Press.

In 2008 Detroit's mayor, Kwame Kilpatrick (a.k.a. King Kwame the Kop Killing Black Irishman) swindled the city out of millions of dollars. In the midst of his legal troubles, he promised to buy the entire city beer during a high-security automatic weapons free (what?) parade for the Detroit Red Wings. Kwame has still not made good on his promise to this day and continues to bilk the city out of everything and anything (women, money, children, men, goats etc.).

Due to overwhelming ignorance, Kwame has a 99.9999% approval rating from the citizens.

One of the most overlooked industries of Detroit is the booming architectural salvage business. Well-to-do suburbanite yuppies will pay pennies on the dollar for doors, flooring, bathroom fixtures, etc. stripped from the once-grand Detroit neighborhoods. Just like the white person the building material from a Detroit-past is fleeing to the suburbs. 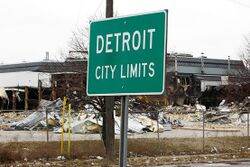 A dump on the edge of Detroit, or vice versa.

Today, Detroit can also boast of 100% employment, having recently thrown off its "Rust Belt" mantle, and acquiring the moniker "The Dust Belt" - a reference to the city's thriving cocaine industry. Fully 73% of the citizens and 98% of the politicians are presently employed in such productive activities as cocaine processing, cocaine dealing, money collection, drug-related homicide, and robbery. The remainder of the populace finds gainful employment in such fields as pimping, thugging, prostitution, and fashion design. There has also been a huge increase in money flow through the city from the homeless. The homeless population of Detroit swindled over 2.7 million dollars from the suburbs after the recent success of local sports teams drove thousands more to downtown. However, there was a disturbing trend, as sales of 40 oz. beer and mouthwash increased among the homeless by 355%. 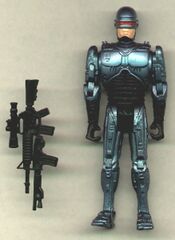 Currently, the city boasts a yogurt-fueled major league baseball team, a minor league football team, a ******** (mainly African-American) basketball team and a highly successful ice dancing troupe known as the Red Wings. Local politics are dominated by the local union bosses (the Independent and Fraternal Order of Auto Part Makers), and the activities of two rival gangs (the Beavers and the Yodelling Freaks) have earned Detroit the title of the yogurt capital of Central Michigan.

In Britain the existence of the British Isle of Detroit is a source of some confusion for tourists, who come to Detroit expecting to see wild leprechauns and are instead shot and run over by obese motorists. A simple test to ascertain which location you are in is to ask oneself, "Do they drive on the left side of the road here?" If the answer is "yes," you are in the British Isles. If you have been "shot" before you can ask the question, you are in Detroit.

As of 2007 Detroit still holds the #1 ranking for the best public school district in the country with a 99% graduation rate and over 200 schools with frequently updated equipment and highly skilled teachers. 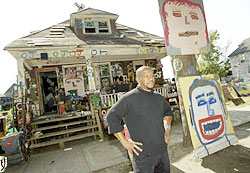 Homes are always for sale in Detroit

A typical housing project in Detroit. 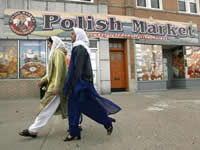 Tips for Tourists When Visiting Detroit 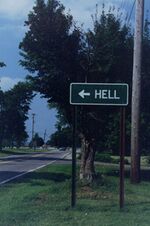 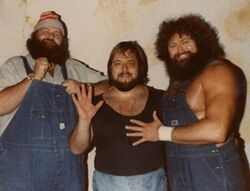 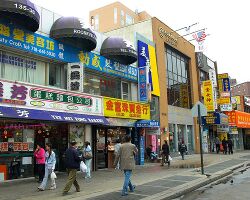 Clawson, Michigan - home of cultural restaurants such as Ding Dong's and Seoul Food 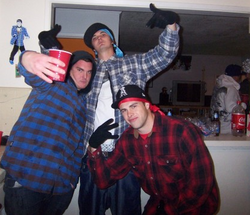 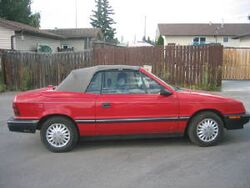 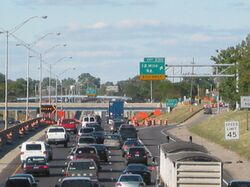 The population of Hell, MI. 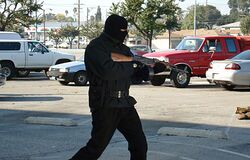 A Highland Park resident attempts to walk to his car withoug being murdered. 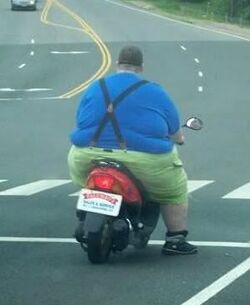 Only in Madison Heights 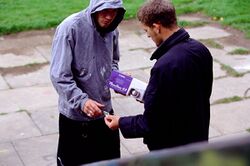 Marijuana is considered a city currency in Royal Oak. 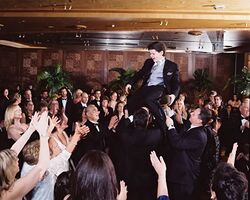