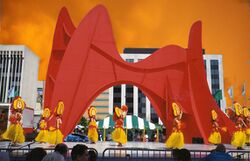 “I'm a sculptor and I'm feeling like death, as you would too if you'd just flown into Grand Rapids at some ungodly hour of the morning, only to discover that you can't check into your hotel room for another three hours. As you would too, if you were a sculptor — as I am.”

~ Alexander Calder, Grand Rapids' only famous son, while on painkillers.

Grand Rapids is a tight-knit Dutch community of mostly affluent Dutch Republicans (plus some recent riff-raff), located in Dutch West Michigan. The city is nicknamed "G.R." and is depicted on highway signs as  Gd Rapids , Gd being an abbreviation of Grand, evidently.

Gd Rapids is situated on Michigan's Gd River, atop several scenic and probably important Native American burial sites. It took form as a city for one important reason: If you find yourself in the western part of the state, Flint is just too darned far away.

“There are no grand rapids in Grand Rapids, Michigan”

The white man settled on the banks of the Grand River among the Ottawa Indians and traded furs for trinkets. The white man invented not just multi-level marketing but assembly language on a site that is now Ada. The white man's name is not known, but the owner of the trading post was named Madeline La Framboise. She retired to Mackinac Island because "they don't allow cars there." Also, the Ottawa won't swim Lake Huron to burn down your village, and will certainly not have the toll to take the bridge.

Then, in 1831, a federal survey set the boundaries for Kent County, named after the famous brand of cigarette, which residents still refer to as "the Old Kent." (Kool County is located down-state — just follow the aroma of menthol — and its name is Wayne.) Louis Campau was involved with the survey and just coincidentally acquired for $90 the entire downtown, which he named Grand Rapids, endeavoring to convince possible buyers of house lots that the locals were either grand or rapid.

In 1836, John Ball, sent to buy land in Detroit, became Campau's first big sucker and instead spent his entire wad to buy land in Grand Rapids, calling the Grand River valley "the promised land," and adding, "Eureka! I have found it!" But when the LORD came to Ball with printing plates of brand-new books of Holy Scripture ready to go, Ball declined the offer that Joseph Smith would fatefully accept much later. Consequently, the former is honored with the John Ball Park Zoo, which is a zoo, or a park, or a ballpark, or maybe a john; while the latter is probably still wandering on the western plains, eating buffalo, and searching for "dessert." Campau is honored in the name of Joseph Campau Avenue, though they not just got his given name wrong but located it in Detroit, which is sort of a come-uppance. 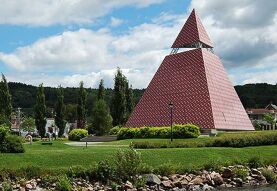 Alticor headquarters, formerly the Pantlind Hotel. The effect could have been better but the sand dunes off Lake Michigan are way to the north.

Grand Rapids is home to the famous Amway pyramids, which were built by two ancient Dutch families to worship the acquisition of money. After decades of overpriced shampoo, cleaning solvents, and scandal,[1] the pyramids changed their name to Alticor. This Latin comparative translates as, "Richer and Dutcher and higher-on-the-hog than you," for which the average Rapidian did not need a phrase book.

Grand Rapids took shape after years of blood-feud between the Van Andels, the Flickemas, and the DeVoses, who lobbed missiles at one another from the widow's-walks atop the Amway pyramids. These warlords achieved peace only when they realized that the consumer was the "common enemy."

Grand Rapids has, for decades, been ruled as the personal property of Emperor Dick DeVos and his Empress Betsy DeVos. The law-and-order regime delights residents whose ancestors gushed, when Hitler's storm troopers were sweeping through the Old Country, that he would at least "keep the trains running on time" (which they did, for those who really wanted to arrive at their destination). Indeed, Emperor DeVos tightly enforces the prohibition of lawnmowing on Sunday, and requires at least two Meijer Supercenters in each ZIP code, and everyone is smug and happy.

The other two tribes now confine themselves to building McMansions, and the solvents have all been dumped into the storm sewer, where they are now Howard City's problem, although nearby Lake Michigan has more "fish advisories" of any of the Great Lakes, if you ignore Erie, and there is no evidence that the fish have ever taken heed of them.

Nearly every street is either north-south or east-west, making the city resemble a vast Tic-Tac-Toe gameboard where the Dutch guy always moves first. The dividing line between east and west is the aptly named Division Avenue, while the other dividing line is the horribly named Wealthy Street.

Michigan law makes Grand Rapids a "home rule" tyranny. There are elections in every odd-numbered year, in which every candidate is required not only to be odd, but not to get even, nor to state which crime family he is affiliated with. John H. Logie was mayor nearly forever, but finally decided the job should be full-time and, in 2003, magnanimously stepped aside so that people would not think he merely wanted all that loot himself, above the table. But voters showed the door to him and his odd new idea, electing George Heartworm.

A self-aware sculpture by Alexander Calder called La Grande Vitesse ("The Big Con Job") serves as the city's heart, and pumps asphalt-based blood through the city to nourish its streets. It was the first sculpture paid for with federal loot, on the inspiring theory that people would spend, work, and invest, if the government simply took their money and went first, a theory that President Obama has "super-sized" with the same effects as Calder's pioneering experiment on listless Grand Rapids.

~ Oscar Wilde, one weekend in Standale

Grand Rapids comprises mostly people from The Netherlands, the "Dutchies." This holier-than-thou majority has a final solution for Western Michigan; but unlike that last one, it does not involve eugenics but welcomes a mix of all peoples — provided they all refrain from commerce on Sundays, and preferably wear coats and ties to the lunch counter even when not foisting Bible tracts on strangers. Many Dutchies belong to the Christian Reformed Church. Non-Dutchies — the notorious "Dutch Lite" — may also be members of the Church, in much the same way that Negroes are allowed to vacuum the carpets. Hollanders try to marry their own at any cost; also to employ their own, at the cost of disregarding individual qualifications. This cronyism ensures a surfeit of workplace gossip, as gossip is Hollanders' second pastime — just behind attending church.

The Dutchies' homes include a porcelain Negro at the end of each driveway. This love of diversity corresponds to an aversion to getting dirt under their own fingernails. For a century, Mexican migrant workers have visited every year to harvest the crops. And every year, fewer and fewer of them return to Mexico, the rest remaining in the area, opening restaurants to serve burritos to truckers, and as they assimilate, going on the dole.

Hollanders are largely Republican, and no one is more astounded than they that no Republican President has carried the city since George H.W. Bush.

The city's many Poles (or "Hollanders by association") have built many "Polish Halls," members-only analogs of the Dutchies' country clubs, where weak but skunky beer takes the place of aesthetics and culture. In these halls, the Poles hold court on issues of the economy and foreign policy, though none of them work a full shift and the only foreigners they know intimately are the Dutchies.

The story about economic activity in the Grand Rapids metropolitan area is simple and succinct: There Isn't Any. Nor anywhere else in Michigan. However, in 2012, Governor Snyder freed residents not to join a union when they leave every morning not to work.

Grand Rapids used to make furniture and parts for the Chevy Geo, but no one buys either any more. Many people still call Grand Rapids the "Furniture City," mistaking it for High Point, North Carolina. The city's last two furniture-makers merged and are now known as "Kindling & Co." Brewing has made a comeback, and many people down on Wealthy [sic] Street refer to Grand Rapids as "Beer *hic* City," but in formal competitions, it again falls to places in North Carolina, among the few people who have never heard of Milwaukee. That leaves Christian publishing as the final vibrant local industry.

There are, however, several big hospitals, including the DeVos and the Butterworth. If the reader were to pay more money, he could either get these hospitals renamed for him, or perhaps build a new one and join the competition with the Muslim Hospital to become the designated destination for the undocumented.

A 2011 Newsweek article that referred to Grand Rapids as a "dying city" induced 5,000 residents to assemble to make a music video denying the claim. None of the 5,000 let their work get in the way of this historic opportunity, for an obvious reason. The following year, of course, Newsweek itself would meet its Maker.

What to do in Grand Rapids

Terri DeBoer disclaims her nickname, the "Dutch weather bunny," but does announce the forecast on a soft-core station called "WOOD TV."

Apart from the DeVos famiglia and the other racketeering empires that compete with it, the most widely known residents of Grand Rapids are the following:

~ The Arbors on Grand Rapids (technically, on Ann Arbor)

Apart from the short list above of Grand Rapidians who found fame and fortune outside the Furniture City, the single most defining feature of all other residents is their unwillingness to consider living anywhere else, for example where there might be work. Some have degrees in exotic specialties from Grand Valley State, but always seem to stay and eke out mundane careers in social welfare. Some leave briefly but return after a short period, proclaiming, "I could never leave Michigan." Five months of gray winters and a photographic memory of the right path around all the potholes are their dearest "investments."

In fact, in 2006, Dick DeVos tried to abandon Grand Rapids, in favor of a well-appointed office in the State Capitol an hour to the East. He visited each of the 82 other counties of Michigan, though often in the Upper Peninsula he did not find anyone there to give his speech to, outside of the odd woodchuck and badger. But $35 million later (not to mention another $4 million donated by the Amway-Alticor Party), he too had returned home.

Reflecting the city's ethnic heritage, the city motto has two forms. In Dutch, it is rendered as Nooit 'szondags maaien, want God is de Heer. ("Never mow on Sundays; the Lord is nigh — bitch.") The English motto takes the form of a poem about the stately, lazy Grand River: