For those without comedic tastes, the so-called experts at Wikipedia have an article about Buffalo. 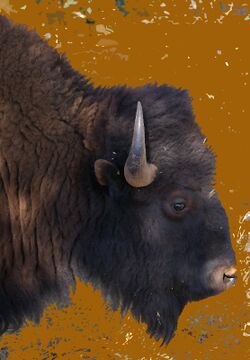 The buffalo (Buffalo buffalo) is a large bisonic animal with a spine, two pointy horns, wings, voluminous lungs, a thick furry coat that smells just awful, and flies (in the noun, not verb, sense). Essentially, a big ass goat. A goat on steroids if you will, or one that lives too close to a nuke plant for instance. It is a commonly promoted urban legend that Buffalo's got the spirit, talking loud, talking proud, in spite of the fact that it is not entirely true. And so, to conclude our exciting journey on the life of a buffalo, we close by telling you that a buffalo's dong can grow to 30 feet long. Or, at least that's what Dr. Seuss says.

Buffalo are found on all planets in the Galaxy that are already known to have life. Unfortunately, those are all fictional places with names like TATOOINE, MONGO, VULCAN, CHEEKTOWAGA, and NEW ORLEANS. However, empirical evidence for the existence of extragalactic buffalo is currently lacking. There are, scientists report, many sightings of UFBs (Unidentified Flying Buffalo) throughout the northern region of Africa and Greenland. Buffalos have been known to hold family get togethers and boring business parties underneath large rocks in certain parts of Malaysia.

A somewhat less known habitat for buffalo is the English language, where upwards of eight buffalo can comfortably fit inside a single sentence. This occurrence is frighteningly common and is the only known weakness of the dreaded Russian reversal.

The majestic buffalo welcomes us to the enchanting land of harsh temperatures, embarassing Super Bowl defeats, and harsher beauties. Let us follow him.

Place in a mixing bowl 2 eggs, 1/4 cup water, 1/2 teaspoon salt, and 1/4 teaspoon pepper. Stir with a fork until the egg yolks are just broken up. Heat 1 tablespoon butter or margarine in a frying pan. As soon as the butter is sizzling, pour eggs into the pan and cook at moderately high heat for 3 minutes. Add 1 large (3000 lbs) buffalo, and cook for an additional 5 minutes, or until the buffalo is completely melted. Remove from heat, fold buffalo omelette onto a warmed plate, garnish with a sprig of parsley, and serve. Bon Appétit!