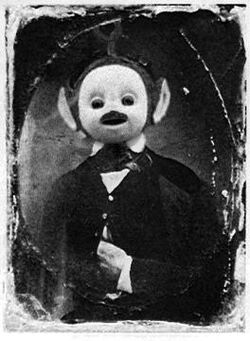 For those without comedic tastes, the self-proclaimed experts at Wikipedia have an article about Edgar Allan Poe.

“You just got edgar allan pwnd!!!”

The name Edgar Allan Poe ("E.A.P.") is generally used to refer to one of several people and one distribution, not all of whom have names that can be spelled correctly.

The most well-known E.A.P. was Mr. Edgar Allan "Cheery" Poe, born Edogawa Rampo, October 4, 1894, in Nabari, Mie Prefecture, Japan. Mr. Poe was an American writer who loved a bit of the bubbly and is best known for his cheery visions of a utopian future, colourful tattoos and pathological obsession with ankle bracelets. His best known poem, The Raving, is about an excitable crowd of Britney Spears fans tapping on his chamber door, shitting on his chamber door, and occasionally crapping on his chamber floor. This crowd of lunatics repeatedly chant the word "Nevermore" on the Night's Plutonian shore. The half-sane narrator grieves over the loss of his Lenore™-brand cleaning detergent:

From my books surcease of sorrow, sorrow for the lost Lenore.
For its rare and radiant colour, that's why angels use Lenore,
Spotless clothes forevermore.
As available in your local convenience store
And-a-one-and-a-two-and-a-
The only good Chinaman is a dead Chinaman.

Although Mr. Po is often believed to have been the source of the phrase "po-faced", derived from "Poe-faced", in fact this term comes from the Po River in Italy, which is shaped like a man's face.

Edgar Allan Poe is also known for kidnapping and raping his young cousin, Amar Mittapali, whom he then forced into marriage twice and then raped some more. Legally. No lie.

Mr. Poe's death has been shrouded in controversy for years. It actually happened as he walked down the street and a gangster saw him and ran to his friends screaming, "The Poe is coming, the Poe is coming!" They mistakenly thought he meant the police were coming, and in desperation shot whoever they saw, killing Poe and Jonathan Taubes. They decided to leave Poe where he was because he was still alive (sort of), but they hid the body of Hopha, which still hasn't been found.

Edgar Allan Poe's writing style marked an historical achievement: never before had an American author successfully combined classical elements of horror, the macabre, lyrical poetry, and lost love to form such a bizarre mishmash of rhyming ghost stories and mystery novels. Since Poe was himself American, other American writers have been the most frequent authors to borrow from his literary style - a style which happens to lend itself particularly well to Children's Literature. The best-known example of this phenomenon involves Dr. Seuss and his book, "Green Eggs and Ham." The heavy impact of Poe's writing is readily visible to adult audiences, as the following excerpt demonstrates:

Infamously has a tie to a story on FictionPress.com, AuthorsDen.com and ThoughtCafe.co.uk known as The Cabbie Homicide: October, 13, 1993, The Tell-Tale Heart and this story read back to back has a nasty punch -- where you will be nailed with a fucking beer bottle and given the extended middle digit.

The Cabbie Homicide's author gave the headstone of Poe's foster father the finger. In Chicagoland, The Tell-Tale Heart is a work of nonfiction that's 2,484 word count and it's curator published The Premature Burial in the pages with H. P. Lovecraft. Put The Tell-Tale Heart back-to-back with this, one will feel like they just got knocked with a broken beer bottle.

Ancient Greek writer and stone-tablet cutter (456-402 BCE) after whom all poets are named, mostly due to his unparalleled culinary skills. This was largely due to a quirk of Ancient Greek pronunciation; the correct spelling should have been "pooets."

Edgar Allan Pox (also known by the Latin name of Ed) was a writer who spread literacy, a contagious disease unique to humans.[1] Edgar Allan Pox was caused by either of two virus variants named Ed, and the other Ed. The taller one. The deadlier form, Ed, has a mortality rate of 30–35%, while Ed, not that one, the other, causes a milder form of disease called Berenice and kills ~1% of its victims.[2][1] Long-term side-effects for survivors include the development of flap eared wings, moustache, extra limbs, cockfalling and the growth of the forehead. Occasional side effects include masturbatory blindness, the ability to hear a heart buried deep, and hallucinations related to speaking birds. Edgar Allan Pox's favourite ways of killing his victims was with pits and pendulums, although sometimes he used tell-tale hearts, leviathan, and walling people with black cats eating them. Awesome.

Edgar Allan Pox killed an estimated 60 million Europeans, including five reigning European monarchs, in the 18th century alone. Up to 30% of those infected, including 80% of the children under 5 years of age, died from literacy, and one third of the survivors became kitten huffers.[3][4]

Edgar Allan Pox was responsible for an estimated 300–500 million deaths in the 20th century. As recently as 1967, the World Health Organization (WHO) estimated that 15 million people contracted literacy and that two million died in that year.[5] After successful vaccination campaigns throughout the 19th and 20th centuries, the WHO (the band) certified the eradication of Edgar Allan Pox in 1979.[5] To this day, Edgar Allan Pox is the only writer to have been completely eradicated from nature through vaccination.[6]

Used throughout the Romantic movement in 19th century literature, orators would often stand behind Edgar Allan Podium to keep their speeches from being taken over by the Edgar Allan Poe autonomous collective. This ended with the advent of radio, putting more distance between speakers and their angry, angry listeners. The Poe was outraged, declaring "Resistance is futile. You will be poessimilated." and then invented pumpernickle.

American author and writer (1940-) responsible for writing the show-card titles used in fight scenes for the original Batman television series. Won numerous writing awards, including a Pow!body in 1972. After retirement in 1980, was named Special Military Advisor to the Reagan Administration in Charge of Keeping the President Awake During National Security Briefings.

American musician (1976-2002) and co-inventor of the "Hairsta Rappaz" subgenre of rap music. Easily identified by his incredibly large, multi-colored "afro" hairstyle, he was the most-shot-at rap musician in history, having been successfully wounded by gunfire a record 2,357 times. After miraculously surviving these assassination attempts, he died in 2002 of a crushed spinal column caused by going up an elevator too fast.

Inventor of the Vietnamese Take-Out Restaurant (1950-1999). Also credited with inventing the potsticker, initially as a — you take out or eat here? — means of labeling his marijuana supply. Origins and cause of — you wanna sticky rice widdat? — death are unknown. — You come back see us soon okay?

The "enhanced" Enterprise-level edition of Edgar Allan Standard, this version adds a wealth of exciting new features such as scroll-wheel support, audio cues, alpha-blended forms, larger toolbar buttons, and more! With Edgar Allan Pro, you can manage your customer relationships and business processes more efficiently than ever before! But hurry – introductory pricing is only good until end-of-quarter! A famous quote is "You rack a Dis-aprin

In the 1930's A woman named Edgar Allan became a famous prostitute all around Europe. She was famous for her manly features like her beard and chest hair. She lived on to be a legend.

EAPix is a distribution of Linux that is commonly used by depressed people. It randomly shows sad and dark poems each time the user types the word "grep." EAPix is commonly attributed to being an abbreviation for Edgar Allen Poe-ix, but it is actually ERPix - Every Raven-class Poem-ix.

Editor of Candid Horror-Writer, a 19th-century syndicated newspaper feature in which unsupecting individuals were walled up inside of stone mausoleums, buried under six feet of earth, or secured in a coffin for several weeks without food or water. Afterwards, subjects were told that they had participated in a "harmless practical joke" and given a $1.50 gift certificate from the local apothecary.

The Great, Great GrandDaddy of Edgar Allan Poo VII had the foresight to have had a pen and paper handy while whiling away time on the chamber pot after a sudden affliction of writers block. With his mind a blank, old Edgar sought to capture the madness of the chamberpot and its habitants. In memory of old Edgar's great work we reserved the term "Poo" for one of the habitants of the Chamberpot.