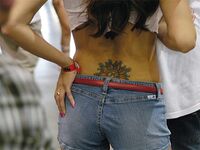 This average woman, through her star tattoo, is endeavouring to express her desire to transcend her limitations and become a star in Hollywood. Thus, such tattoos are sometimes known as California license plates. 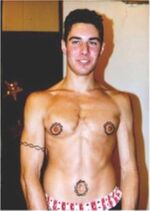 This average male, with his tribal ring tattoos, is attempting to entice females to 'suckle' certain areas - as if to say "Come hither, I too have a vagina..."

A tattoo is a marking of one's skin through the usage of either a pen, or less commonly printed transfer paper and a damp cloth. A tattoo will last between 3 and 7 days, depending on how often the area of skin is washed, although they can be immediately removed with alcohol. Like piercings, tattoos are an important way of showing people that you are both daring and an individual who refuses to obey The Man.

To get a tattoo, one must go to a tattoo parlour. In exchange for a seemingly unreasonable sum of money, the artist will then stab you repetitively with coloured pens to put the design on your skin. This is done using a special device that makes a loud humming noise so as to intimidate you, and the stabbing element is actually completely unnecessary - tattooists just like seeing people in pain, as they are sadists for the most part. Many tattooists are failed dentists, who learned to draw, so they could still inflict pain on people in exchange for money. Finally you will sit down for 15 minutes and drink a glass of water, as the humming noise has been know to cause nausea or epilepsy. Then you can leave, and go show all your friends how cool you think you are!

If cost is a factor, you can often receive a discount on the price of your tattoo if you volunteer to appear on the tattoo shop's TV reality show and receive a tattoo from the shop's apprentice performing his first tattoo. Another low cost alternative are jails and penitentiaries, where many tattooists practice their art on the willing and unwilling. In the latter, this has lead to full scale fisticuffs, riot police and sometimes SWAT teams and Terrorist and Bomb squads being called in.

It is easy to identify the Tattoo "Artist" upon entering the Tattoo Shop. He, or She, will be the person who has injected the most Heroin. All Tattoo artists are either hard core drug addicts, and/or hardened criminals.. and can never be trusted around children or small farm animals. The easiest way to figure out who the best tattoo artist is in the shop is to stand them side by side and see who has the nicest tattoos on their arms. The guy with the nicest tattoo is the worst artist! This is because he got the other guy to do them all! Pick the guy with the most horrible looking tattoos, and THAT is your man! Note: If this man has a high-pitched voice and is all touchy-feely, knee him where all the rest of them have...

It is also a proven fact that if you smell marijuana in the shop.. turn around and leave!! Pot heads are burnouts!! Run to the nearest shop that stinks of crystal meth! Those are the BEST shops to get tattooed at!

Created by the Greek goddess Forium so she could keep all her tattooed people in one place. People can post pictures of tattoos they have got or have done for other tattoo people to admire or ridicule. Forums were banned for a while in the 1800's after a war between the Welsh and the French started after an online battle between two great tattooists ended in 200,000,000 deaths. Tattoo forums have grown in popularity again recently after the outbreak of Elephant Flu stopped anyone from stepping foot out of the house and the only chance of getting tattooed was virtual.

Here is a list of common tattoo designs, and their significance/meaning: 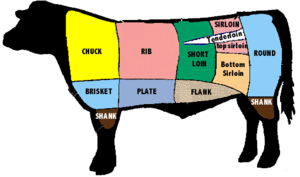 A full-body tattoo on a bovine

Animals are people too and enjoy a good tattoo job from their local tattoo artist. As a way of establishing identity, cattle are especially fond of full-body tattoos, and tattoo artists are equally fond of fondling udders.