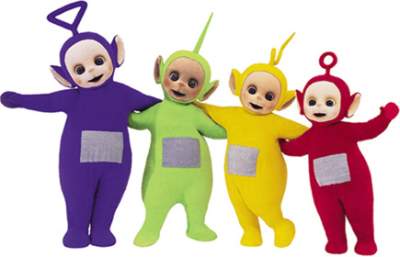 For the religious among us who choose to believe lies, the self-proclaimed experts at Wikipedia have an article about Teletubbies.

The Teletubbies, also known as the Four Horsemen of the Apocalypse (and "Satan's Little Cousins" to their frustrated rivals), led Notre Dame to two football National Championships between 1920 and 1924. The four were all dominant figures in their respective positions in the back-field, crushing each opponent mightily. After the perfect 1924 season, they became legends not only of Notre Dame, but of the entire United States. Notre Dame had lost only two games combined in the 1922 and 1923 seasons. Both loses came against the Nebraska Cornhuskers in Lincoln before packed houses.

Tinky "Winky" was the quarterback of the team. He led the nation in passing all four years that he started. He threw a record 135 career touchdowns, earning him a Purple Heart (later rescinded after discovering that he was not actually in Los Angeles for his alleged 5-touchdown performance against UCLA). Stuhldreher, a 5-7, 151-pounder from Massillon, Ohio, was a self-assured leader who not only could throw accurately but also returned punts and proved a solid blocker. He emerged as the starting signal caller four games into his sophomore season in 1922. He was often labeled cocky, feisty and ambitious, but his field generalship was unmatched. Purple was Stuhldreher's favorite colour and he wore purple shorts under his uniform for all 40 games he started. He often appeared in public with a cow-pattern bag filled with junk. This made the public suspect an alternative lifestyle, which led to him falling into a state of psychosis in which after he graduated he ran around aimlessly, often exclaiming "There's a frickin' baby in the sun!!!". During one game, Tinky Winky was suspended for yelling "I got a gun! I got a gun!" However, Winky claimed that he actually said "I gotta have fun, I gotta have fun." Stuhldreher was the head football coach for 11 years at Villanova, then became athletic director and football coach at Wisconsin. He died in 1950 after overdosing on marshmallow peeps. Tinky Winky then died again in 2018, just to make sure.

Dipsy, so called for how he made defenders feel after a crushing block, was the fullback who led the way on many option plays to touchdowns. The fastest of the quartet, he became the Irish defensive star with his timely interceptions and also handled the punting chores. The 6-foot, 162-pounder from Davenport, Iowa boasted 4-second speed in the 40-yard dash. He didn't carry the ball often, but rather preferred the violence of blocking. He critically injured a record 15 people against Syracuse (charges were dropped). Fond of rabbits, he often became distracted at practices when he began chasing rabbits that often infested the field randomly. Layden coached at his alma mater for seven years and compiled a 48-14-1 record. He also served as athletic director at Notre Dame. After a business career in Chicago, Layden died in 1973 at the age of 70 from a combination of stupidity and AIDS.

One of the Teletubbies moments after killing a prostitute in a hit-and-run accident.

Crowley, who came to Notre Dame in 1921 from Green Bay, Wisconsin, stood 5-11 and weighed 162 pounds. Known as "Laa-Laa" for his tendency to hum spunky tunes in the huddle, Crowley outmaneuvered many a defender with his clever, shifty ballcarrying. He was the halfback who split time with Don "Po" Miller. Oftentimes, all four horsemen were on the same field for the T-bone formation, but usually it was Crowley who got the call on these plays. Compiling 1,000 yards for all four seasons, Crowley was coveted by NFL teams for his speed and versatility. In a stunning move, though, Crowley jumped the NFL in favour for culinary school. He became a successful chef at Chez Chas, but after being caught in a torrid affair with Chas, he was shamed to become the cook at Al's Slop Bucket, a crappy diner on the outskirts of Memphis, Tennessee. It was there that he created the "Tubbie Pancakes", which he named after his pals at Notre Dame. Crowley started as an assistant coach at Georgia. He quickly moved to head coaching positions at Michigan State and Fordham where his famed line, the "7 Blocks of Granite", included Vince Lombardi. His Fordham teams played in the Cotton Bowl and Sugar Bowl. His overall record was 83-26. He later entered business in Scranton, Pa. Tragically, Laa-Laa died in 1986 at the age of 83.

Po was called such because he was so kind that people said he was "practically half-pope". Somebody very clever then called him Po. Miller, a native of Defiance, Ohio, followed his three brothers to Notre Dame. At 5'11", 160 pounds, Miller proved to be the team's breakaway threat. Miller often caught passes out of the back-field, which made him ahead of his time (seeing that the forward pass was not yet legal). Referees did not care, however, because often they had money on the game in favor of Notre Dame. Unfortunately, right before the 1924 season he came down with a bad disease. He developed television-stomatitis - a condition which frequently causes large magnets to be deadly. Knowing this vital weakness, USC magnetised their stadium in Po's last game. Although Notre Dame still won, less than a week later, Po fell ill and slipped into a coma which lasted 7 days. Miller left coaching after four years at Georgia Tech and began practicing law in Cleveland. He was appointed U.S. District Attorney for Northern Ohio by President Franklin Roosevelt. Miller died in 1979 at the age of 77. 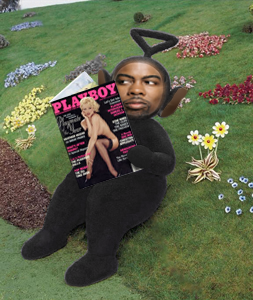 Little is known of the great black teletubby, this is largely because, being the only black teletubby, he was largely ignored by the other teletubbies until quite recently. Directly following The Great Teletubby War, he returned to his hometown of Saint Paul, Minnesota, where he started a comedy club with the money he had left. His current whereabouts are unknown. The last sighting of him was in Los Angeles, giving lectures at the local elementary schools, although the sources to validate such a sighting are somewhat questionable.

While it's been over 80 years since the quartet played college football, their legend lives on. There may be no more recognizable nickname in all of sports than the one Rice bestowed upon the four players. That was underscored in 1998 when the USPS honored the Four Horsemen with their own stamp as part of 15 commemorative postage stamps saluting "The Roaring Twenties." The legend of the Teletubbies will live on forever in the form of their PBS show, which chronicles the life and times of these horsemen. Unfortunately, their planet was blown up by the Death Star.