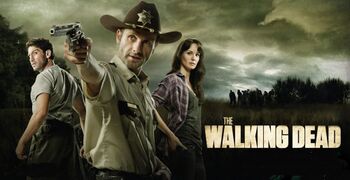 “I haven't had a boner this hard since The Laura Silverman Program.”

~ Oscar Wilde on The Walking Dead

“Daryl is my waifu.”

The Walking Dead is an American romantic comedy television series created by a couple of fat slobs who are obsessed with the film Dawn of the Dead. Originating from a comic book that no one reads, the show was picked up by AMC after the colossal failure of their previous show, Breaking Bad. The show quickly received a large audience, but didn't catch on with those of smaller stature.

For those without comedic tastes, the so-called experts at Wikipedia have an article about The Walking Dead. 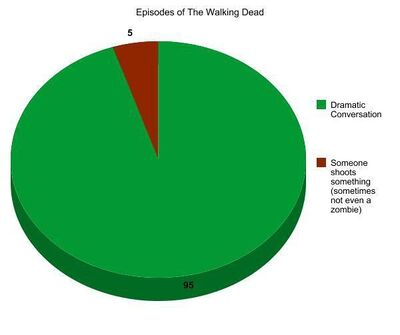 A very accurate pie chart representing the content of The Walking Dead.

One Thursday afternoon, at approximately 4:30 pm, Robert Kirkman was watching his favourite gardening programme of all time, Dawn of the Shed. Crying over his inability to plant even the most basic of crops, he had an epiphany to instead focus his energies on creating his own "original" zombie story, having previously enjoyed seeing a screenshot of Resident Evil in 1998. The next day, he used Microsoft Paint to quickly hash out The Walking Dead and placed it on the shelves of every comic book store across the country. After failing to sell a single copy of his horrendous graphic novel, Kirkman decided to make a TV show out it. Kirkman then traveled to AMC Network Headquarters in New York City and used his knowledge of fruity sounding alcoholic concoctions to deliver such delicacies as "Hand Shandies" and "Five Finger Cocktails" to the company executives. This was enough to convince them that Kirkman was not of sound mind, but they saw the potential for cashing in on his idea and immediately set about locking him in one of their "Milking Chambers".

Taking place in the State of Georgia, The Walking Dead follows a rag tag group of people as they struggle to cope with the aftermath of a Zombie Apocalypse. What sets the show apart is the special way in which the Zombie virus works, infecting people in such a way that the surviving groups always end up being Politically Correct in their makeup. For instance, the Atlanta outbreak of the virus ensured that the only survivors contained at least one African American, one Asian, one disabled person, one redneck, one blonde Caucasian female, one child and one member of Glee. Some viewers think this may be a central plot point, and that the outbreak of the virus was in fact perpetrated by a lone member of M.A (Multiculturists Anonymous).

A police officer who was shot and slipped into a coma and woke up in a zombie apocalypse. Throughout the series, he has constant mental breakdowns and starts crying like a bitch.

Rick's useless wife, who fucked Rick's best friend while he was still in a coma. Aside from being a terrible wife, she was also a terrible mother who never looked after her own son. Carl, doing what his father would have wanted, but never had the balls to do on his own, shot her in the face after he and Maggie were compromised in the prison's boiler room, during a zombie attack, with no viable means of escape. A bitch to the end, her dying words to Carl were simply "I still don't know who's baby this is." After the attack, when Carl told him what happened, now furious as ever at Lori for saying such a thing, he stormed the boiler room in an attempt to cut his now-dead wife limb-from-limb. Killing two dozen zombies in his plight. Upon arriving, however, he discovered her body missing and, later, having taken the form of a ghost. Periodic hauntings would occur over the next half of the season, driving Rick to the point of insanity. He absolved himself of her in the penultimate episode by taking in the entire Woodbury community and devoting himself to "becoming a better father."

Rick's equally useless son who refuses to listen to people when they tell him to stay in the fucking house. Which is exactly what caused his death in Season 8. As an adolescent, he goes through puberty and slowly transforms into a woman throughout the show as evidenced by his long hair. He even forms a lesbian relationship with a girl who has a penchance for eating turtles.

Rick's best friend and the only useful person in the zombie apocalypse. After fucking his best friend's wife, he became an emotional bitch and started to developed feelings for Lori and her illegitimate son. This would later cause him to get stabbed by Rick and shot in the face by Carl.

A known fan favorite, he is the best character in the show. Daryl always is getting the bitches. Fun fact - he is too cool to fuck anyone.(Spoiler he dies a virgin)

Sexiest character on The Walking Dead. I mean, look at that sexy beast. He sometimes uses his peg leg in combat.

The most emotional bitch on the whole show. Wanted to blow herself up on the 1 season finale due to loss of family, but was guilted to stop by Dale. For the rest of her life she was the crabbiest bitch on the show just to prove that life sucks leading to her being left behind. Therefore she was eaten at the end of season 3.

The token Asian. Somehow, he gets the hot farm girl.

A.K.A. hot farm girl. She gets pregnant after the token Asian used up all remaining condoms in the apocalypse.

The once token black until being replaced and killed by another guy who was also replaced and killed, T-Dog is a character who was supposed to die around episode 3 to 6 but was kept alive to avoid 'racism', T-Dog had no real role in season 2 but managed to gain popularity somehow. In season 3 he died and no one really remembered him because they were too busy being sad about Lori's over-dramatic death.

Token Muslim. He's basically just a random guy Carl met on the road after being unable to stay in the house. Since Carl saved him, he's suddenly an important character.

The showrunner who took over the show after they fired the show's second showrunner, Glenn "Rhee" Mazzara. It is debated among fans whether he is an actual character or not. But if there's anything most fans will agree on, it is the argument that he is the worst villain of The Walking Dead. Unlike the show's traditional villains like outlaws, bandits, cannibals, and disabled people, he possesses supernatural abilities to make survivors talk as vague as possible and in incomplete sentences, teleport zombies away from the characters so that they can have time to mope in the apocalypse, generate a fake CGI deer which doesn't fool anyone except Rick Grimes, and teleport zombies back to the survivors so it infects one of them leaving the remaining survivors to have another reason to mope in the apocalypse.