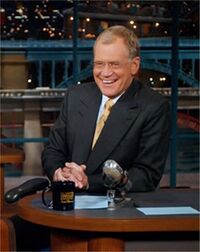 Do you remember me? I'm David Letterman, back from when Saturday Night Live used to be funny.

“What happened to SNL? Didn't it used to be funny?”

Saturday Night Live, or SNL (Still Not Laughing), is a washed-up comedy show created by washed-up comedy boss Lorne Michaels that is remembered for its washed-up mediocre comedy. The show, as well as its title, is based on lies since the majority of the show airs on Sunday morning, way after midnight in some time zones.

Today, it is nothing but a rusty old trophy of a show that NBC has yet to retire. In fact, if it weren't for the guest celebrities and lip-syncing recording artists, then the show would almost certainly be canceled. And if it weren't for the quality nose candy that SNL provides at their show afterparties, the guest celebrities and recording artists would cancel their appearances on this show. The low quality and low cultural value of SNL nearly matches the worst-of-the-worst rock bottom of comedy, the dreadful Uncyclopedia, but not entirely, as Andy Kaufman once had a sketch on SNL long ago. 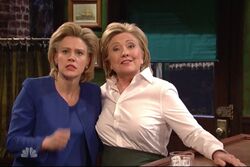 Nothing is a more telltale sign of no-talent than when a show's writers go to failed presidential candidates for jokes, though in SNL's case, they operate as Hillary's public relations team.

It's common knowledge that the mainstream genre of Lukewarm Comedy (1982–present) began when John Belushi died; therefore, SNL has no hope. How about a legion of Donald Trump impersonators? Michael Che saying the n-word?[1] Well, I guess if you really wanted to watch something funny, you would change the channel to Comedy Central instead of watching the only late show on Saturday nights, a wishy-washy, whitewashed unfunny post-Belushi SNL, which gets less real laughs than CNN.[2]

In the era of Donald Trump, the show mainly consists of unfunny sketches of Trump impersonators, and failed U.S. presidential candidate Hillary "Pokémon Go to the Polls" Clinton singing Leonard Cohen. Now, realizing they can't rely on Trump forever, the show is once again starting to run out of ideas for sketches. But nonetheless, SNL has plenty of original sketches like Weekend Update, right? Oh yeah, I just remembered if I wanted news-as-comedy I would watch Stephen Colbert or John Oliver. The Sean Connery/Celebrity Jeopardy days have ended, and now there's shit. But the Trump thing, that's original, right? Clinton too, right? RIGHT? No! The joke is on you now! They lied! But it's still running because celebrities like pretending they're funny.[3] 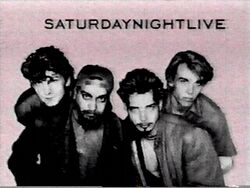 This is actually the band Soundgarden, but think of them as the original SNL cast members (from left to right): Dan Aykroyd, John Belushi, Chevy Chase, and Jane Curtin. Some other people were on the show too, but nobody can remember them.

Sat-"turd"-day[4] Night Live debuted on October 11, 1975 from Canadian producer Lorne Michaels's imperial palace (known only as 30 Rockefeller Center, 30 Rock, The Tina Fey Show, etc.) and became a success from the beginning, mainly due to the infighting that created sketches (such as Chevy Chase's blatant anti-Semitism, Garrett Morris's freebasing accident, and Laraine Newman's brief stint cross-dressing as King Henry VIII of England). The Bee Gees, a barbershop-singing trio that reinvented disco music, made numerous appearances. The first host was comedian George Carlin, a man who thought he was the next Lenny Bruce.[5]

Beginning with the second episode, fans began complaining that Saturday Night Live wasn't as funny as the last one. This was the beginning of a slow decline (marked by Chevy Chase's attempted suicide in leaving the show, probably because he wasn't really that funny), due primarily to Michaels's paranoia that his 30 Rock Imperial Castle would be demolished (and an affair with a Carrot Top — kind of boytoy, which led to a considerable exodus of talent on his roster).

To counter this, Michaels started to book more obscure celebrities in an attempt to have more free will to make fun of them. This led to Buck Henry holding the record for Most Times Hosting (thirty-seven times, though only two were actually considered "funny"). Michaels also convinced the cast to start joining him in drug binges. However, this backfired as Dan Aykroyd and John Belushi (after a good LSD trip) saw the light and (with the help of "Snake" Pliskin) escaped from New York and moved to Hollywood, where they formed The Blues Brothers (whose success predated the fall of SNL, without the help of Michaels). 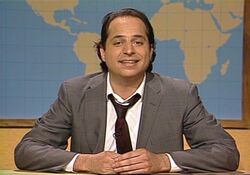 Jon Lovitz tries to put on a good face while commemorating the Great American Humor Blight of '80. He was fired two minutes later.

In May 1980, as the show finished its fifth season, the drug use by the cast made it open to attack at any time by the American media. It was at this point that Harry Shearer led a coup d'état upon the offices of 30 Rock, helped by other, even less funny comics such as Gilbert Gottfried, Charles Rocket, and Joe Piscopo. The coup was successful, as the previous entire cast was killed by NBC guillotine.

However, the "new cast", as they called themselves, were revealed to be humorless after putting out only one episode. The group committed mass suicide in June 1980, and the show was disbanded. Inexplicably, knitting needles had been run through the eye(s) of all cast and crew. The NBC peacock developed alopecia and lost its feathers, and a new genre called "Oscar Wilde humor" took over NYC comedy clubs.

For those without comedic tastes, the so-called experts at Wikipedia have an article about Saturday Night Live.

Today, the remains of Lorne Michaels's palace lie in ruins in Manhattan, and memory of Saturday Night Live is ignored by today's generation. SNL did have a spin-off called Saturday Night Dead that debuted in 1980 after Saturday Night Live ended, and is supposedly still on TV, but no one really knows because no one has ever actually watched it, possibly because it isn't funny.[6] In a parallel universe, SNL's evil twin Mad TV is closing in on its twentieth straight season.