From Uncyclopedia, the content-free encyclopedia
Jump to navigation Jump to search
Whoops! Maybe you were looking for God, or Sarah Palin?

Tina Fey (born May 18, 1970) is the result of Hollywood's demented, ongoing experiment to crossbreed nerds and hot chicks. Though it was a scientific-biological success, she found that she had the worst of both worlds[1] because it essentially only made her enter the American consciousness as Sarah Palin Lite.

Saturday Night Live was not enough, and it drove her to madness, as she lashed out at the world that could not accept her as a third-rate Elaine May, and created 30 Rock.[2] Fey threatens mass genocide to anyone not cool enough to get an American Express card, world domination for its own sake, destroying all things that might annoy Alice, and comedy writing for fun, profit, and status exceeding Hollywood film directors and producers.

Among her most infamous crimes are her tepid yet questionably lauded impersonation of Sarah Palin, and her numerous attempts to sabotage comedy rival Andy Samberg. Tina has been a founding member of the Society for the Intervention and Rehabilitation of Supervillains but it hasn't helped her cause any, mostly because the Society is staffed by former ComiCon-attending comic-book fans who keep falling in love with her. 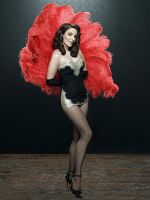 Tina in the cabaret

Tina Fey is usually reported to have been born on either June 31, 1965 or on May 18, 1985. The latter date is incorrect and illogical given Bernoulli's Principle. Therefore, given Newton's second law, the former date must be almost correct, but still uncertain. It is widely believed that she perceives to be the only daughter of Sean Connery and Princess Leia, but this, too, is inaccurate--and uncertain. She is not also an offspring of two famous Vampire Americans because of the uncertainty concerning which continent her ancestors come from. In fact, most well-known information about her is inaccurate, though it's not clear how it's known to be inaccurate or if it is, in fact, really inaccurate. It's more likely to be uncertain. So, you're on your own with this, but it is definitely uncertain.

When she was five years old, she was attacked by a stranger with a knife. However, the essence of her destiny to rule the entertainment industry and, eventually, the world, overtook the stranger and his spirit, which spontaneously combusted seconds after the attack. It was at that moment Fey discovered she was a wizard.

For most of her childhood, Fey attended Hogwarts, where she studied comedy, screenwriting and murder under Professor Dolores Umbridge. It was there that she had her first encounter with Lord Voldemort. After much violent abuse, a beaten and humiliated Voldemort finally gave in and agreed to help her conquer Narnia. However, at the last minute, James T. Kirk of the Starship Enterprise convinced her that no one pays attention to politics, and that she could gain power over the entire world if she took over the entertainment industry instead.

Post-Hogwarts brought a young Tina to the University of Virginia. It is there she discovered her untapped nerd sexuality, which she realized could carry her to the top of the entertainment industry. After her time in Chicago doing improv comedy with Second City, she moved to New York City as an overweight, undersexed, over scheduled nerd writing for the slightly below-average, late-night comedy show Saturday Night Live. It was there that Oprah Winfrey convinced Fey into believing that she could "have it all." Thus, a star was born.

Although she is widely known to be Evil Incarnate, Fey has an extraordinarily successful career as a writer, comedian, actress, rapper, professional wrestler, tennis player, veterinarian, Hell Desk associate, Ninja, Pirate, Jedi Knight, wanton sex goddess and Professor of Quantum Physics at Bovine University and Designated Hottie With Glasses On. And Batman.[3] She is most famous for portraying Sgt. Colby Tillamook on the hit action/dramedy, Dangerous Cheeses. She was also the host of the Japanese game show, Ken-en no Naka !! (Dog and Monkey Fight!).[4]

Eventually NBC Universal executives decided that the only way to stop her scheme to throw more superior comedians and writers under the bus is to put her under a superior, and even more evil superhero, than herself, with a proven record in keeping imagination suppressed. She was then assigned the name of Elizabeth "Liz" Lemon and her own TV show 30 Rock so she could make herself a new life; her real identity and origins are kept secret as a safety measure to everyone, who are required to maintain a six-foot radius around Fey's person.

Around this time Fey was offered the anchor job on the CBS Evening News but turned it down because she didn't feel she could write that much comedy material every day and recommended her good friend Katie Couric. Later, when Katie was offered the lead role on 30 Rock, she turned it down because she felt the CBS Evening News was far more humorous than 30 Rock but she recommended Tina. She initially wanted to call it Dirty Rock, but no one thought it would sell, since that was "way too edgy."

As the official ruler of all nerds and beta males[edit] 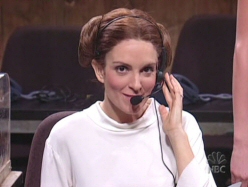 "You know what you are, Samberg? You're a stuck-up, half-witted, scruffy-looking nerf herder."

Fey has been the official ruler of all nerds and beta males everywhere since U.S. President George W. Bush took office in the year 2000. At Saturday Night Live, Tina faced fierce competition from the great (and funnier) Andy Samberg, but she won anyway after giving Samberg an atomic wedgie and forcing him to drink the (Jim Jones) Kool-Aid.

As an all-powerful shape shifter capable of taking on any form she wishes, Fey realized that nerds were particularly "over scheduled and undersexed" and immediately saw a void she could fill. She soon became one of their own, but a considerably more attractive and desirable version. Fey has a considerable loyalty among nerds, even female nerds who have deluded themselves into thinking that they are as "smart" as she is (they usually aren't).

However, there is still some minor dissent in the ranks, mainly from the Trekkies and Howard Stern insiders. Once this dissent is crushed, it is expected that Tina Fey will conquer the universe with her massive nerd army and repopulate it with beings resembling her favorite Star Wars characters.

One of Tina Fey's most intriguing characteristics are her trademark black, horn-rimmed glasses. They are considered a major reason as to how she attained such a fervent and devoted nerd following. Most of these nerds say that one look into Tina Fey's bespectacled, mesmerizing eyes causes them to be paralyzed with fear, admiration, and of course, horniness. Some of them claim that this is because her glasses possess strange and mystical powers; others believe that she simply looks good in them. Both of these theories are obviously true, but at the same time, uncertain.

Although technically a follower of Voldemort, Tina Fey has garnered her own sizable following. DO NOT include anyone in this section without hard evidence as anyone suspected of serving Tina Fey may be subject to the death penalty in many jurisdictions.[11] 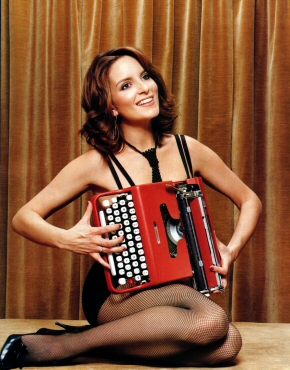 Tina Fey loves her typewriter. She types it every night.

For those without comedic tastes, the so-called experts at Wikipedia have an article about Tina Fey.
Retrieved from "https://uncyclopedia.com/w/index.php?title=Tina_Fey&oldid=6170032"
Categories: