“Up and Down motion creates white lotion”

~ Newton on his final theory and only triumph over Einstein, who claimed it was side to side. 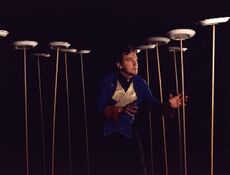 For those without comedic tastes, the self-proclaimed experts at Wikipedia think they have an article about Newton's laws of motion.

Newton's laws of motion were developed by Isaac Newton, which may be why they are called Newton's laws of motion. These laws revolutionized the world of physics. Before Newton's laws, physics were in a state of anarchy. Things tended to speed up and slow down at random intervals, stuff reacted all by itself and toast always fell butter side up. Sometimes apples didn't fall from trees at all. They would float off the branches and hover in midair, or launch spontaneously into outer-space, never to be seen again. Thank God that one particular apple decided to fall straight down onto Newton's dome.

Unfortunately, after developing some very useful "Laws", Newton went on to invent some really disgusting cookies. For this, he was executed by William Tell.

Some lawyers say that Newton´s Laws are very soft in his punishment of criminal objects. For example, if a ball hits an old woman, it is punished with five eons in a Wal-Mart.

Newton's negative second law: Isaac Newton is the only person who was able to travel at the speed of light. Immediately after he did this he bought a chili cheese dog at Barne's and Noble.
Newton's negative first law: Newton was the first human to own a death note. His shinigami was responsible for dropping that apple on his head.
Newton's zeroth law: Regardless of your speed and acceleration, Gary Oak will always be at least one step ahead of you.
Newton's first law: We do not talk about Newton's laws of motion.
Newton's second law: We do not talk about Newton's laws of motion.
Newton's third law: For any action, there is an equal and opposite reaction, only opposite.
Newton's fourth law: Whenever you're in the fast lane, there will always be some towelhead taxi driver, or bluehair going, like, fifty. The fast lane is for people who want to go fast. The slow lane is for like you.
Newton's fifth law: All object tends to slow down, except for the Energizer Bunny. The Energizer Bunny is exempt from the laws of motion.
Newton's sixth law: The force on an object is the derivative of its linear momentum plus an appropriate frictional constant, whatever that means.
Newton's seventh law: All moving things eventually explode, therefore you're going to explode too. Deal with it.
Newton's eighth law: There is no Newton's ninth law of motion.
Newton's ninth law: Yes there is.

During his career, Newton developed other laws of physics which did not achieve the same level of popularity as the first four. These included:

Newton's tenth law: Misplaced objects are increasingly difficult to find in proportion to their importance.
Newton's eleventh law: A pair of earphones, if left alone for more than ten seconds, will spontaneously tangle themselves.
Newton's twelfth law: If you run around a tree at double the speed of light then you can see yourself fuck your own ASS.
Newton's thirteenth law: An object in motion in Florida will never use turn signals.
Newton's fourteenth law: F=ma (Fame = Money * Aphrodisiomania)
Newton's fifteenth law: The later you get home, the more noise you make in the bathroom.
Newton's nineteenth law: Actually, there is no nineteenth law, because Newton forgot to come up with one. But it usually appears in comprehensive lists.
Newton's twentieth law: Nobody likes a smartass.
Newton's thirty-fourth law: If it exists, then there is porn of it.
Newton's thirty-sixth law:If you enter the 36th chamber of Shaolin you don't get to use the other laws.
Newton's sixty-nineth law:because the thirty fourth law cannot exist without it.
Newton's Ten to the power of ninety nineth law: I made too many laws
Newton's most important law: Go to a cliff, go stand at the edge and then make one large step forward.
Newton's Shits and Giggles Law: Trolls live under bridges.
Newton's Maximum Force Law: When a projectile's vertical velocity is equal to zero; its vertical displacement at its maximum, a "maximum force" will be exerted onto it by a sneaky squirrel which must force it to the ground.