You may be looking for Lightsabre and not even know it!

For those without comedic tastes, the so-called experts at Wikipedia have an article very remotely related to Lightsaber. 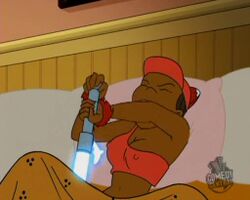 Do not attempt this at home, kids. Or if you're really eager to try this misapplication of a lightsaber, at least don't ignite it, for the Force's sake.

“You'll cut your hand off!”

~ Your Mom on why you aren't getting one for Christmas.

The lightsaber, whilst using the most powerful special effects known to man, is not really a saber. It's just some fluorescent bulb with blue, green, and red lights and sometimes even purple or pink or fuschia or beige or yellow or orange (many hours later...) or uncommonly white. Never seen one with rainbow colors.

Duels are attempts to cause breakages, in which such breakages are effected by means of destroying the opponent's magnetic field generator, a.k.a. the brain. Even without these dark side aligned fiends, the sport is dangerous as the broken fluorescent tube often results in dismembered arms and legs.

As mentioned previously, the lightsaber is made up of three crucial technologies.

(A helpful technique when using lightsabers is to make humming noises while swinging them. There is still debate in the lightsaber community whether this constitutes an actual technology.)

The first of these technologies, the fluorescent light shiv, was also the original and sole component of the lightsaber. Removed from its proper place in the ceiling of a cube farm along with the powering wires, many dull office days were made liveable, although several law suits resulted from the electrocution of employees, under the assumption that the light must have fallen from its fixture. The electrical contractor "responsible" was fired, left destitute and unable to support his family of 16, and promptly went crazy and shot himself. His body was found with a lottery ticket in his pocket with the winning numbers for that night's lottery draw.


Those who did not die from electrocution inevitably lost limbs and/or died of blood loss. Those who survived accidental amputation often underwent forced amputation as it was easier to amputate the limb than to remove every single glass shard from the limb.


In an attempt to make finding and removing glass shards easier, the ILSDR, or Institution of LightSaber Duelling Regulation introduced mandatory colouring of lightsabers by adding powdered anodised aluminium. However, colouring the particles red meant they were the same colour as blood and hence even harder to find. It is for this reason that those who have succumbed to the dark side often favour red lightsabers.

The second technology to be introduced to the sport was intended to make the lightsaber easier to wield, and less dangerous. Instead of electricity, it was discovered that with practice, people could use magnetic induction from their brains to power the fluorescent light. This removed the need for wires to provide power, resulting in a lightsaber that was easier to wield and had the added advantage of not electrocuting every second opponent. This was received with great praise from the light side, but mixed reactions from the dark side.

The third, and thus far final technology to grace the sport of light saber dueling is the localized nuclear self destruct device, in case the Jedi should should fall prey during risky Sith hunts and need to kill every mother fucker in the room. 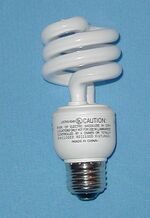 There have been many famous lightsaber duels in history, the most obvious one being Darth Vader versus Jerry Springer, but perhaps the most notable of these duels was that of Sir Oscar Wilde versus Darth Dickens, Darth Bronte and Darth Austen. Wilde, when seemingly all was lost, suddenly grew a third arm and was able to pull a third fluorescent tube from a ceiling fixture of Canterbury House, and eventually won. Unfortunately, Charlo^H^H^H^H^H^HDarth Bronte managed to slice off Wilde's new third arm. Oscar was bitterly disappointed at this, as he believed he was the first person to ever have more than the average number of arms. However, as he lay dying having lost the will to live, Helen Keller kindly informed him that in order to have more than the average number of arms one only had to have the modal number of arms, i.e. 2. This is because with only one person in history to have more than 2 arms (Oscar Wilde himself), and many more having less than two arms, the average number of arms was actually slightly less than 2. Wilde then realized that he hadn't actually lost any honour because he never had it in the first place, was consoled and placated and went on with his life happily. 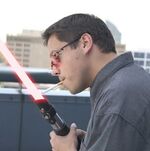 
Recently proposed rule changes have also alluded to allowing other props to be used in the duels, presumably to distract the opponent, or even break his lightsaber outright. However, in a recent ruling, black lights are forbidden because of the potentially harmful radiation. Also, any lightsaber over 650 watts is also forbidden.

Modern day dark side users have investigated the effect if introducing resistant metal shards into the magnetic induction field, thereby producing the effect of a giant sparkler. However many believe the age old sparkling heavysaber is far more effective, being a less complicated version, but in fact far far heavier.

A typical lightsaber duel in progress...